I came across this yesterday and after trying to find more info on google, it wasn’t really coming up with anything.

Does adaptive gain happen on 02 receivers as that’s what I’ve got?

Also what’s the difference between adaptive gain and the easy gain feature? 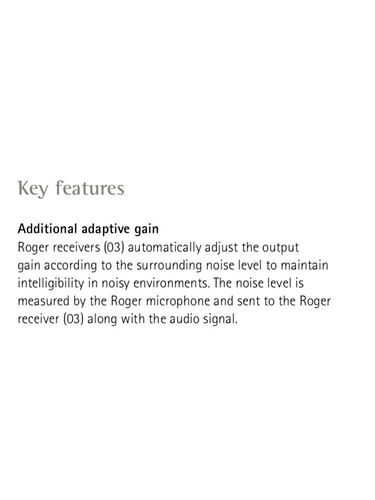 Yes, adaptive gain is available in all Roger receivers. Adaptive gain is a feature that adjusts the gain of the Roger signal according to the amount of noise measured by Roger microphone. It’s a way to make sure that the Roger signal remains stronger than the surrounding noise picked up by the hearing aid microphone and it’s based on the assumption that the Roger signal is cleaner (have better signal-to-noise ratio) than the hearing aid signal, and that you would benefit from tilting the balance towards Roger as the noise level goes up.

Easy gain is a feature that lets you adjust the overall gain of the Roger receiver. Say, that you feel that the Roger signal is generally a bit too soft, you can turn it up manually by up to +8dB.

Thank you so much. That make sense to me.

I’ve always adjusted my EasyGain to max because I could be in high level of noise but now I’ll put it back down to 0 and see how it goes.

I have a Touchscreen and a Hub as well.

One more question as I listen to music with my Roger.

Does adaptive gain happen when you listen to music?

I use my Hub to listen to music on its own and sometimes at the same time as when I’m using the Touchscreen.

The Adaptive gain is dependent on the microphone to be able to measure the noise level, so without the Touchscreen in the network you will not get the effect.

Good to see you on the forum still @Nikita

I asked on a Facebook group who has found adaptive gain to be beneficial and they all came back to me that their Roger was useless in really noisy places.

I’m yet to try my new hearing aids out in a really noisy place with my Roger. I’m hoping my directional settings on my Roger program is beneficial to me as well.

The Roger pen in really loud noise becomes Omni and its really hard because everything is just amplified. But i was able to hear my 4 year old while she skated in a rock loud music arena.

It would be interesting to know how people are using their Roger devices in noise. As mentioned above, the adaptive gain is based on the assumption that the Roger signal has a better SNR than the HA mic. That assumption is not always true.

As distance to the sound source is the most important factor to improve SNR, it could be that the hearing aid has an advantage over a Roger Pen in some situations. E.g. if you are sitting at a table and are having a conversation with the person next to you, with the Pen in the middle of the table, the person next to you could be only 50 cm away from your HA, while the Pen maybe 100 cm from the person. The Pen would then be at a 6dB disadvantage.

A side note on the Pen is that over a certain noise level (can’t remember which by heart, but I think Nikita posted a nice cheat sheet somewhere) it will switch from omni to directional automatically. It does this on the assumption (all these assumptions, sigh) that the omni mode is no longer adding any benefit. Directional pick-up is in principle better than omni, but if the Pen is not pointing at the person you want to listen to it will not help you at all, rather the opposite.

In general, the louder the noise level, the closer the mic should be to the sound source. Directional mics and other tech will increase the useful distance, but only to an extent. In the end it’s your own hearing that will set the limit. In really loud noise the lapel mode is what you want to use. Then you would have the closest distance possible, plus the directional pick-up.

how people are using their Roger devices in noise.

2 x people said they use the Pen in the middle of the table.

I guess using the Roger with your HA Mics on is more beneficial as they you can use both.

I know a lot of my friends have their HA Mics turned off.

Can I ask a question please. @RogerPM

I’ve got new Phonak Sky B90 HAs which use the Roger 18 receivers and I’m using the RogerReady as I’m lazy and hate changing programs myself.

What I’m finding is when I turn my Roger Mic on, the Roger 18s don’t always connect at the same time but they are only about 2 seconds apart. Is this normal?

The reason why I ask, is because I’m wearing 1 x brand new Roger 18 and 1 x second hand Roger 18 and wondered whether that was the issue. Altho both are on firmware 2.0! 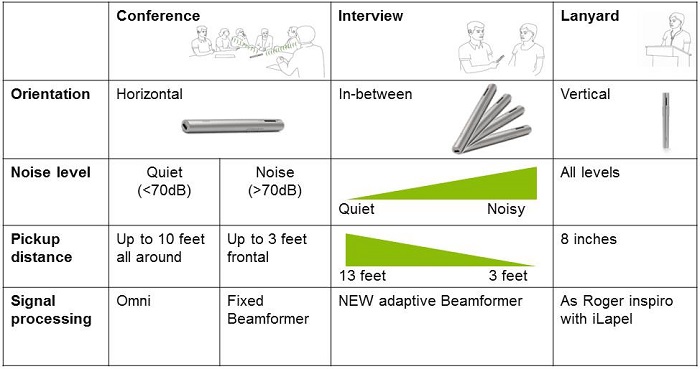 My work have just agreed to get me a Pen and a Select. They’ll really help me at work as physically I can’t let anyone wear my Roger equipment. The Pen is good for pointing and then the Select is good for when I’m at a table.

Because of covid? That’s awesome. The pen is really pretty cool. It’s been so helpful with the plexi glass mask everywhere. This store has music support loud, plexi glass and a mask. I did not hear anything. Took out pen and voila. Although ppl find out awkward so if i see them looking at it i day is a microphone i don’t hear well.

I work with people with learning difficulties and they won’t cope with having a mic attached to them.

Thats so cool! My son wants to do that too.

Proud of your job