Trying to find phone solutions for my Phonak hearing aids

Being a Veteran I have no choice in what hearing aids I use but they have provided ones that seem to pretty good. I have 50% hearing loos in both ears. But now to the problem I am trying to solve. While I do have an iPhone I use it only for interfacing with my many medical devices. Mostly this is because I live in a rural area and down get signal for the iPhone to use it as a phone and I have not been able to hear any calls clearly on it when I do get signal. Also I could use the iPhone to talk to people even though I don’t get signal but having it use WiFi to connect to the internet but there comes another downside. Being in a rural area I only get limited data with my internet which this method uses up quickly. This also makes it so that I can’t use a captioning service in order to have a chance of understanding what is being said. This require internet which is limited by both my data limits and is very unreliable at best. So I use a cordless phone for voice calls though a Home Phone device that does get a signal from a cell tower.

So now to the problem. I do have a newer set of vtech cordless phones that are actually the loudest phone I have ever had, but still find myself having to ask people to repeat what they say constantly when talking with that phone. I’m pretty sure that if I could get my Phonak HA to connect with a cordless phone I could solve this problem to an extent at least.

The other problem I have is the answering device that is part of the phone I can’t hear at all. I might be able to pick out one of maybe 20 words that are said in a message and forget about understanding any of the numbers they leave for me to call them back on.

So now I am trying to solve these problems as best I can. I do actually love my Phonak P90 HA and the app I have for them on my iPhone. Before I got them I had to rely on on watching their lips and where I was in the making an order while in restaurants because of all the noise from dishes being rattled and other people talking to figure out what to say to the server. Now I open their app, push a button, and all of that noise and talk is filtered out so I can understand the server.

So I need an answering machine and phone that will work with my HA so that I can understand things. I did go to the Phonak web and they listed a phone that works, but it had no answering device and only 1 phone so that I can’t have multiple phones in my house.

Yes I know I could pair my current cordless phone to my iPhone and in turn to my HA. But if I do that when I try t o make a call with that setup from my cordless phone the iPhone will then try to make the call through WiFi and my internet instead of using the Home Phone cell tower connection. I went through several GB of data and it was only then my ISP informed me that I had used all of my data for the month that I realized that problem. And NO I can’t just turn the WiFi off on the iPhone because that is how it connects to some of my medical devices.

I hope you people can understand what I have told you here and maybe someone can come up with any suggestions.

When it talks about the KS10. That is a rebranded P90 as well.

I am trialing Paradise P90. I think that they don’t “connect” to a simple landline phone and they need a bluetooth landline phone. Is that correct, or maybe my audi is missing some connectivity program ?

I have been getting HAs from VA for years and they always give me choices. They should understand your need for IPhone compatibility. Are you able to email with your audiologist via myhealth?

If your cordless phone has an earphone jack on it, you could get a BT neck loop to plug into it, which would connect to your hearing aids. Or just use wired earphones.

A neckloop like the Quattro 4L Bluetooth Listening System would work. Try Amazon or Diagio to buy it.

Or Williams Sound neckloop NKL 001 if your hearing aids have a telecoil.

The VA picked these HA to suit my hearing problems like in restaurants like I said earlier in my post. They have no problem pairing with my iPhone. It is that because I need my iPhone to have its WiFi turned on that I can’t just connect my cordless phone it the iPhone or it will default to using the internet to make calls.

I have limited data and unreliable internet service to use that as the means to make calls. As such I cannot use the iPhone for making and receiving phone calls.

No earphone jack on my cordless phone. Don’t know if my HA have a telecoil. Tried going to their web site but could not find anything about telecoil there.

You can probably buy new cordless phones with a jack.
As to the telecoil, look at the information given with your hearing aids or call and ask at your audiologist’s office about exactly what aids you bought. If it has a telecoil, it will be a P90RT. The R is for rechargeable and the T is for telecoil. You will need the telecoil program set up for you to use it. Telecoils are very useful for working with landline phones - if you have a telecoil, then when you go in to have it set up to use, ask your audiologist about how to use the telecoil setting with a landline/wireless telephone.
By the way, you can get a free caption cordless phone from the manufacturer of caption phones with proof of hearing loss. That might solve your problem, esp. if the caption wireless phones have a jack!

You can turn off WiFi Calling in your iPhone if you don’t want to use it.

I know that but the iPhone will not be able to make the call unless I enable it as there isn’t enough signal at my home to make a phone call normally with the iPhone. That is why I have a Home Phone device that my cordless phone is connected to. It has an external antenna that is able to use what signal strength I do have to make calls through the cell tower. Most of the time the iPhone is showing no bars and only occasionally showing 1 bar. The Home Phone device is always showing 3 bars because of the 2 external antennas it has connected to it.

Thanks my HA are designated as P90RT and have already contacted the VA Audiology to get an appointment. I needed to set up the appointment anyway with them because the (R) HA is no longer pairing with my iPhone. And since the (r) is not paired the app won’t let me adjust the program for the HA according to where I am at (ie Restaurants).

So far every caption phone I have looked at has required internet for the captions to work.

Maybe ask the VA about the Phonak DECT phone. For answering machine, your iPhone could take messages and give you the text of what was said with the Google Voice app.

You can by a dongle (adapter) that converts the charging port to an earphone jack or a dongle that converts to a earphone jack and a place to charge your phone you can use at the same time. Here is the Amazon site. https://www.amazon.com/gp/product/B09QLVT75Z/ref=ppx_yo_dt_b_search_asin_title?ie=UTF8&psc=1

I came across this phone today. Seems to have Bluetooth in it but unsure if it has the right Bluetooth. 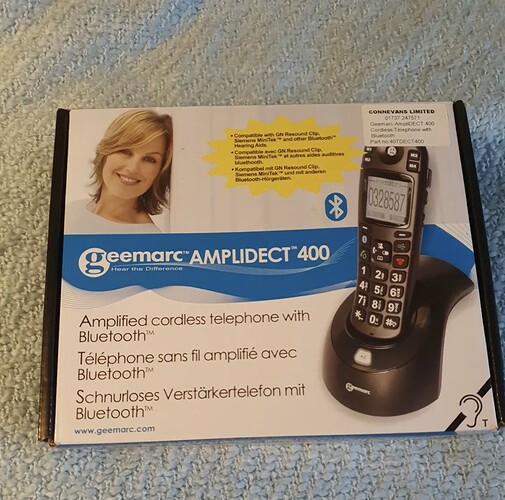 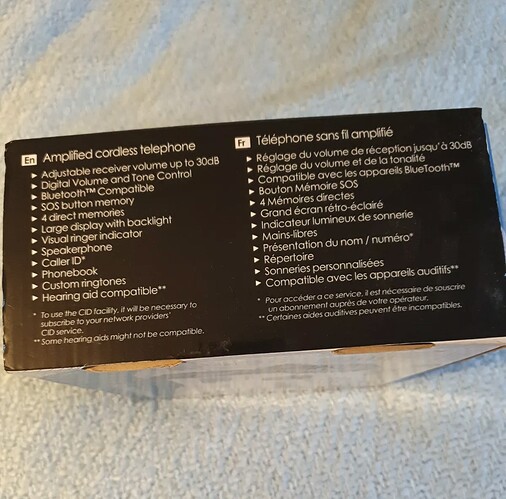 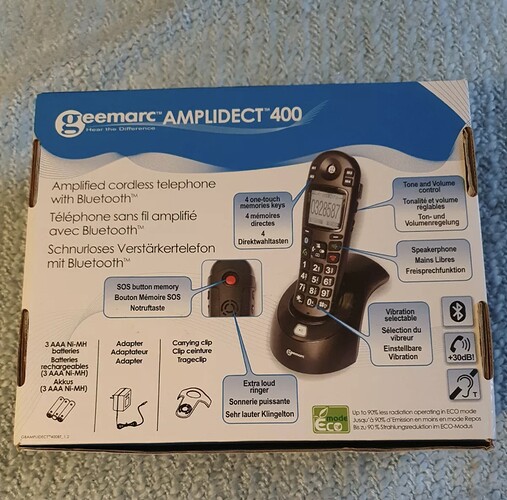 Phonak P90s have a telecoil but you must have the audiologist activate it.

Yes, your landline phone must be bluetooth enabled. I purchased a Gigaset E720 cordless phone and it pairs nicely with the HAs.

Not all have telecoil, only the P13-T and PR-T version

I believe this allows 2 cell phones to be used with it. Bought on Amazon.

Maybe I’m misunderstanding, but this sounds like the opposite of what the OP wants. He wants a phone system to call from his home phone system (not iphone) and connect to his HAs. @sailorsong This will connect to your iphone and call from your iphone. Is that what you want?

Connecting my cordless phone to my iPhone does not work. The iPhone doesn’t get a signal in order to call out or receive calls at my home.

I wish you people would stop telling me which cordless phone will connect to my iPhone.

Kinda what I thought. I hope someone knows how to do what you really want. I am not that person, but I figured I understood what you were looking for and not getting.