There was a thread here a few weeks ago comparing domes and moulds, and most people seemed to prefer moulds. So I decided to try them, and got fitted (acrylic, soft tip) 5 days ago. I’m finding them difficult to get used to, and wondering whether they’re just a poor fit.

I’d had domes for a year, and my main complaint was of poor mid to low frequency coupling. Not a problem in daily life but when I tried direct input shoes for music listening I found the response rolled off at 12dB/octave below 375Hz. The same with telecoil input. Mid frequencies were poor and bass non-existent. Useless for music. In daily life the mid to lower frequencies bypass the domes.

I’d hoped the moulds would give a better fit and hence better LF response, but a test with telecoil input seems to indicate little if any improvement. Should it, with a better fit?

I have several problems with the moulds.

First, I have a stuffed-up feeling, and my own voice and chewing sounds are very loud. (Bone transmission?) Is this an inevitable consequence of a good seal that I’ll get used to? Listening to a conversation while eating seems harder than it should be.

Related to the good seal, it’s harder to hear a telephone earpiece as the mould blocks the sound, and it isn’t picked up by the hearing aid. Likewise, headphones (using my home-build equaliser).

Also, the moulds are hard to insert correctly (nearly impossible at first without a mirror) and there is pressure on the auricle which has caused soreness. Any pressure on the back of the auricle (sitting up in bed against a pillow, or leaning back in a high back chair) causes discomfort verging on pain.

I’m inclined to go back and get re-fitted with the domes, unless the consensus here should be that I just need to get a better fit.

Hi Philip, I have never had any other than domes. On the second day I nearly got into the shower with them in! I think you have some poorly fitted ones. Much depends on the pressure they apply to the putty.
You shouldn’t have pain or soreness, most users will tell you to allow your brain to adapt to the new situation so give them a try when you get a proper fit.
As far as performance is concerned music streaming gives great bass response, despite the correct and appropriate venting on my moulds.
Hope this helps.

Sharing your audiogram would help us understand your needs for molds.

There are a few ways mold impressions can be made. Some people do better with open mouth, some with closed mouth and then there are the ones with a clinched mouth or chewing while impressions are setting up.

When you do get comfortable molds they can be very nice and comfortable with better than domes performance. Properly fit molds can be a touch uncomfortable the first few days until you get used to them.

Sounds like you don’t have a great fitting set of molds. You definitely shouldn’t be experiencing discomfort after a couple of days (and that’s just because you’re not familiar with the feel).

You comments about low frequencies sound like you have significant venting, and of course if you had open or vented domes that precludes low frequency sound too. You also comment about own voice and chewing which sure sounds like occlusion, which suggests you don’t have possibly even enough venting or also possibly a further fit issue.

Here’s my audiogram using the University of New South Wales tester, through a pair of fairly good PC speakers: 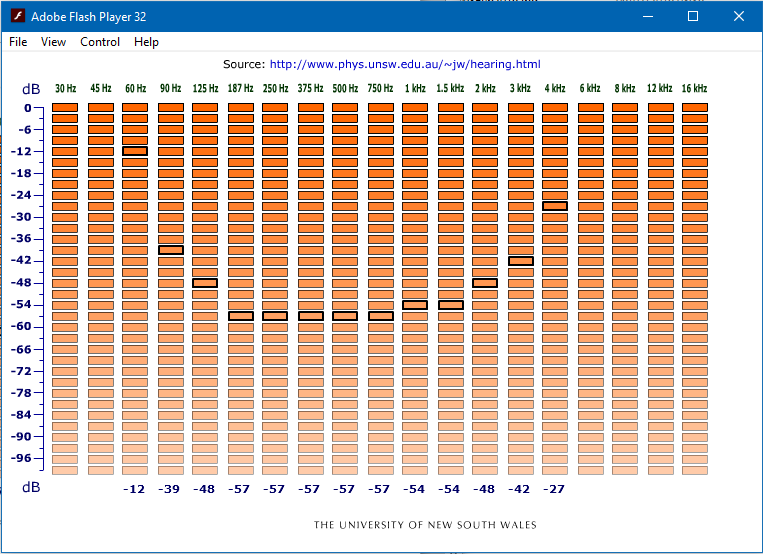 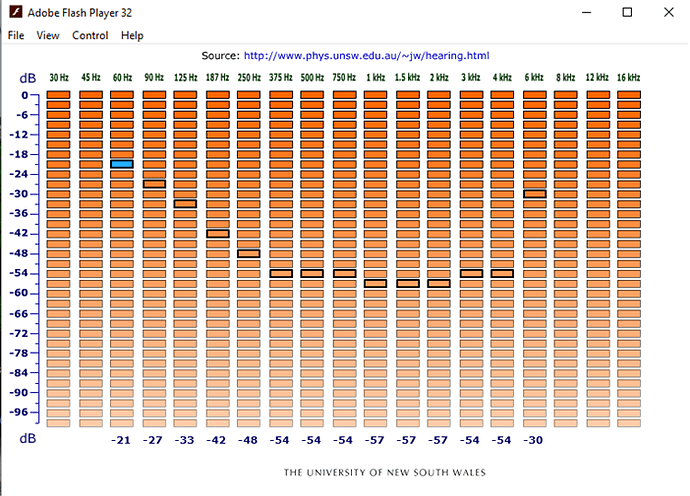 I am guessing that your first picture is both ears unaided. Is that correct?
Do both ears have identical hearing losses?

If your second picture is both ears with aids on it appears the aids are not even close to properly fitted for you no matter what acoustics you are using. What hearing aids are you wearing?

Related to the good seal, it’s harder to hear a telephone earpiece as the mould blocks the sound, and it isn’t picked up by the hearing aid. Likewise, headphones (using my home-build equaliser).

I’ll assume you have some BTE type, their mic is in their body, behind your ear, top part. So in order to use a phone in a classical way, you have to put phone speaker higher up, so that aid mic can actually hear it. So, not aim at the opening of the ear canal but aim at the top of the ear. Or just start a few cm away from ear, then bring phone closer and search for the best position (up, down, left, right).

Same with headphones over aids, you want them to be hit with the sound from the headphones, not avoided.

That is, if you want to use aids to get that sound.

I also heave trouble with molds, my ears are sweating a lot, I have soft material micro molds and my ear canal is narrow, so I cant have any vent on my soft molds.

What you guys recommend what should I get based on my Hearing Loss?

Get Encased acrylic mold (with vent)? Should I try with domes (are they suitable for me?)? Maybe something other?

Sorry for hijacking and thanks in advance

I also heave trouble with molds, my ears are sweating a lot,

I can’t wear soft ear moulds either my ears just sweat like mad. I use hard ear moulds instead.

With or without ventilation

I’ve got no vents. 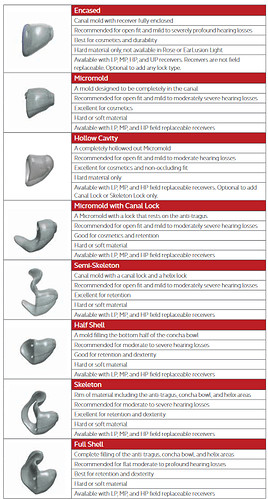 Which one do you have?

I am guessing that your first picture is both ears unaided. Is that correct?
Do both ears have identical hearing losses?

Correct. Correct. My ears are not identical, but not that different.

If your second picture is both ears with aids on it appears the aids are not even close to properly fitted for you no matter what acoustics you are using. What hearing aids are you wearing?

The second is my right ear only. I didn’t get a good audiogram with the left as I don’t think I had the mould inserted correctly.

The aids are Oticon Spitit Synergy, NHS issue. The acrylic moulds are the “skeleton” style according to the list posted ny dmrljes

FWIW, I have c-shell acrylic molds with vent for my Paradise P90 aids and they are great (comfortable, do not try to slip out, etc). I have used custom molds with vents for several years with different hearing aids. Some were good and some were bad. The secret is getting a good ear impression and then having the molds manufactured correctly. What I like about Phonex (I know others do the same) is they digitize the impression to make the custom molds. Also, if need be, the digitized version can be modified to correct impression errors. So much for my three cents (allowing for inflation) worth.

Thanks for the clarification about audiogram pictures.
If the audiograms are even close I would think you need some form of molds. Too much of your loss is 40 dB or more in most of the speech frequencies. So, getting comfortable molds is important.

As I said, these audiograms are relative to 1kHz. I have no way of calibrating them to absolute values. At mid frequencies a professional audiogram put it at 20-30dB.

Ok, so the audiograms you showed us are not even close to accurate. Knowing this it is difficult to help you concerning your question about molds.
Good luck

Your situation sounds quite a bit like what I experienced with my first set of silicone moulds. It was so uncomfortable! My audie had me sit completely still while she made the moulds. I changed audies because I’d tried every dome and receiver wire length and then moulds and still couldn’t get comfortable and she said there was nothing more to be done. I learned on this forum about a closed fit and an open fit. My new audie had me talk and move my jaw while the gel hardened. The resultant moulds really increased my comfort and I lost that stuffed up feeling. I’ve had them for about 18 months now and I’m satisfied.

As I said, they are relative, not absolute, but they don’t need to be absolute to demonstrate a 12dB/octave roll-off below 375Hz, which can’t be right.

Molds work great when fitted/made correctly. My last set were 2 years old fit great. The lanyard to remove from ear broke off. I then used the wire to remove and it started pulling the speaker out of the mold. Had new set made and they are horrible. Now out for 3rd remake. Mine have vents in to reduce occluded stuffed up feeling. Love my molds when they fit correctly.