I am going to be trialing the new Phonak Paradise aids (specifically Audeo RT P70) I need a way to connect the aids to a Panasonic 2 line cordless handset for work. With the Widex Evoke aids I am currently trialing I am using the Uni-Dex with a 3.5 to 2.5 plug adapter which is working great. i do not see a similar product that will accomplsh that. Looking for suggestions. 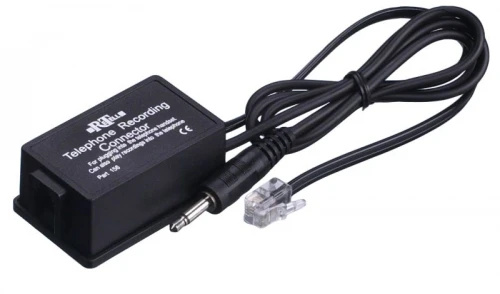 Not sure if this may help? It connects my Roger Pen to a landline. The Roger then streams to your hearing aids.

Roger pen is a tricky one with post-marvel aids.

If you’re using pen’s mic to talk, then that solution won’t work on post-marvel phonak aids.

In marvel/paradise you can use pen iN which doesn’t have BT, or regular pen but only if you disable the BT.

So, if this device relies on BT features of pen to grab the mic signal, then unfortunately that won’t work on post-marvels.

However, if this device only replaces speaker part and you still use (landline) phone mic, then it might work even for post-marvel aids.

Ah yes, Blacky, good point. I never really used the bluetooth capability on the Roger Pen to connect to my mobile as it was so temperamental (at least in my experience!) so I completely forget about this feature until I am reminded! Using the device above with the Roger Pen and then streaming through Roger direct should work though, shouldn’t it? (Working from home at the moment, no landline !)

Using the device above with the Roger Pen and then streaming through Roger direct should work though, shouldn’t it? (Working from home at the moment, no landline !)

only for what you hear

but which mic would you use that the other party hear you?

for marvels-and-later you can’t use mic on the pen, it just won’t work since it wants BT and as I mentioned, that won’t work

Interesting, did not realise, thanks for this. But with the landline, can’t the handset be used?

The handset does have a headphone jack. So if I understand you correctly the tvconnector should work. Di you have any idea of the range with the Marvel or Paradise aids and the tvconnector? I. Also trialing a Roger Select, but not sure I am going to see enough benefit to spend the money in the select.

If you plug anything into the headphone jack in the handset then it shuts off the phones mic and the person cannot hear you on the other end.

One of the complicating factors seems to be the fact that this is a cordless handset, not the base itself. Another issue is that it is a 2 line phone. I need to still be able to use the handset to pickup and transfer calls as needed.

Depending on the amount of walls, I have those non concrete ones and tv connector holds for around 10 m and one wall (don’t have more walls to put between us to test).

Both cover the roughly same distance.

Hmm, with that range I might be able to make it work. What do you do for the microphone end of things?

I bought some cheap lavalier mic on amazon to test the idea. Works but I think if you want some proper sound, it makes sense to spend more than 10 bucks on it

Is the phone telecoil compatible? Then you can activate a manual telecoil program.

Is the phone bluetooth? Depending on the bluetooth protocol you can connect it directly (turn off your cellphone BT).

You can plug in the TV connector and use the phone as the mic so long as you don’t need to really move with it.

The phone is telecoil compatible. I don’t know if the telecoil program on the Phonak will work any better, but in the Widex Evoke I am trialing now I pick up so much background him that I can’t here ANYTHING, let alone the phone.

The phone is not bluetooth compatible.

Unfortunately I do need to be able to move about some. So far everything I have plugged into the headphone jack shuts if the phone’s mic.

So, the annoying thing about the Paradise/Marvel is that they’ve dropped the auto t-coil function. So if you have the telecoil in the hearing aid activated you’ll have to switch in and out of that program every time you want to use the phone (maybe worth grabbing a remote for this). Then you need to hold the phone in the correct position behind the hearing aid, which takes a bit of practice. However, you would have the option of reducing the hearing aid microphones or turning them off completely so that you get only the signal from the telecoil, which should resolve the background noise issues.

Your clinician needs to activate the telecoil.

Unfortunately the background noise appears to be related to the T-coil itself. It is not present until I activate the T-coil (on the Widex) and then the hum starts. I work downtown and get the hum many places downtown, and everywhere in our building. The hum does not happen at home or other places. I don’t know if the Phonak T-coil will work any better.

The annoying thing for me is that while the Paradise and Marvel aids have all of these really cool things they can do, it would seem to me that many others beyond myself have problems using the phones at work, most of which are landlines of one kind or another.

It should not be so hard to solve this problem. For me this is an essential area where I need to be able to hear. My ability to work depends on it. I may well wind up sticking with the Widex as there is a relatively simple and affordable way to solve the problem through the Uni-Dex.

Is the Panasonic Cordless equipped for blue tooth? My panasonic cordless will pair with any blue tooth so you should be able to pair hearing aids to the cordless phone.

Well, give it a try and see. The telecoil shouldn’t cause any humming when you aren’t in the program, and typically it is low enough not to interfere with phone conversation.

I am having the Paradise set up with the telecoil enabled, we will see how it will work. The Widex Evoke that I am trialing right now get a VERY loud hum when the telecoil is turned on at work. I don’t have and issue with the hum when I am at home.

It hit me that one way to approach this might be to use the splitter and one of the little bluetooth transmitters along with a lapel mic. Still a bit clumsy, but maybe a little cleaner than the tvconnector.

I am going to trial the Roger Select but if I don’t get other benefit from it it makes a very expensive way to solve the phone problem.