I don’t have much confidence in my current audiologist. My options were limited due to insurance coverage (which is a new thing for me!). I’m in the process of paying out of pocket to switch to a different audiologist closer to home for fitting/adjustments.

My audiogram is in my profile, were the power 85 receivers appropriate for my loss? I’m a long-term hearing aid user since before I started kindergarten.

The fitting range is different for an open fit vs an occluded fit.

ETA> Also here’s the fitting range for the 100

Anyone able to help me understand if the 85 receiver with bass domes is an appropriate fit for me?

The way I read your 2K loss is that it’s within the fitting range of your 85 receiver. Though just at the limit with Bass Domes (see image below). But, I am not an expert/professional! This is just my best guess on how to read a fitting range chart. 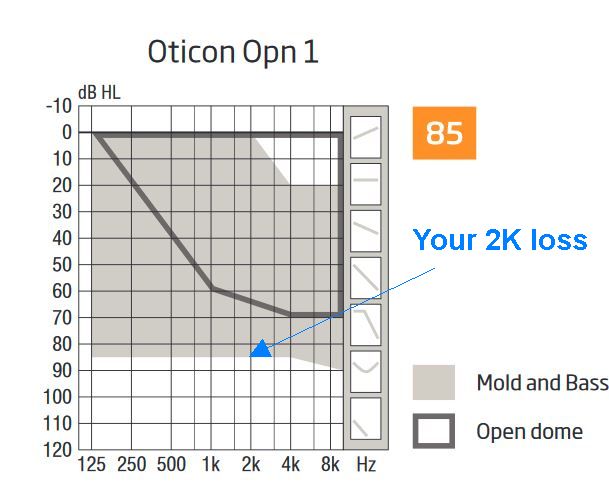 That’s how I interpreted it as well, though past audiograms have noted a loss at 90dB. I questioned the audiologist about whether going to 100 would be better, but she said that I could just pay for new receivers in the future if I need to switch.

It’s tricky because the 100 sounds so different. Most of us avoid using it unless it’s absolutely necessary. A skilled programmer can pull it off with 85s and the right domes.

There are others who can provide better fitting advice. But I can share what I have learned.

It’s normal for Audiograms to vary by 5db because they are not exact.

You are without any headroom if your loss gets worse in the future. But that doesn’t seem like a big deal because receivers are relatively cheap.

I don’t know if the following would make an audible difference, but the more powerful receivers have more distortion in their specifications (Look at the % of Total harmonic distortion on the specs). For this reason I think it makes sense to use the smallest receiver that will cover your loss.

And @audiometrix_hearing just told you the same thing

Thank you for your input. I hadn’t thought about the harmonic distortion aspect, and it totally makes sense.

As the upper limit of a device is reached, in this case driving the 85 hard, it may exhibit more distortion as well. Sample to sample variances might influence results. Are power drain and the receivers the only difference? I always imagined there was more to it than that. I don’t know though.

Seems most fitters recommend a BTE rather than a RIC beyond 85 receivers. I’ve been told it is distortion that makes for such recommendations.

As the upper limit of a device is reached, in this case driving the 85 hard, it may exhibit more distortion as well.

VinceJ is correct here. I have the OPN1 and was originally fitted by my audi with 85dB receivers. They caused distortion on the high end on my right ear (as you can see my loss from 2KHz and up is 90dB or worse on the right ear) and I had to have the gain dialed down by 4 to 6 dBs in the 4KHz and 6KHz respectively to get rid of the distortion.

I later upgraded to 105dB receivers and the distortion was gone and I didn’t need to make adjustment to correct any distortion. I had to pay $175 extra for each new 105dB receiver with custom dome ($350 total). Once you go up to 100 and 105dB receivers, custom domes are required. I would recommend 105dB instead of 100dB receivers simply because they cost the same and the extra 5dB headroom may help in the future if your hearing gets worse.

Audiometrix_hearing said that the 100 sounds so different, but my personal opinion is that the 85dB and 105dB I have sound pretty much exactly the same, little to no difference at all to me. As for more powerful receivers have more THD (total harmonic distortion), on paper that may be right but in my personal experience, I don’t notice any difference at all between the THD of the 85dB and 105dB receivers at all either.

I think the 85dB would fit you OK and if you experience any distortion like me, the gain can be adjusted down a little bit at the right frequencies to fix that. The 85dB receivers are much less conspicuous than a custom mold for the 100+dB receivers which sticks out a bit more with a big tail/horn that’s totally visible on your ear.

I asked my audi whether I could have been fitted with 105dB receivers up front for the same price instead of the 85dB receivers, and she said no, the original cost only covers up to 85dB receivers with a standard dome. If I go to custom mold and/or a larger than 85dB receivers, I would have to pay more for the larger receivers plus custom molds as extra ($350 extra for the pair/set) anyway. But if you have insurance that would pay for any of the extra cost, I would recommend you go with the bigger receivers up front so this cost is picked up by the insurance. I had 95% insurance coverage and made the mistake of not upgrading to the bigger receivers later so I had to pay the $350 completely out of pocket later on when I could have had my insurance company pay for 95% of it up front. But that’s OK, it’s not that much and I now have a pair of 85dB receivers as back up to use in case I want to have my HAs looking less conspicuous or in case I have to send in my 105dB receivers in for repair or wait for replacement.

Its true that everyone handles it differently. A 105 with a custom mold might be a good alternative but some people just can’t handle the “plugged up” sensation.
@Volusiano Next time you need a custom 105, let us know. Our price is half that.

Thanks, I’ll keep that in mind. Half of what I paid for is definitely attractive for sure. I’ve ordered the MiniPro kit (on the way) so I should be able to take care of everything myself now and bypass my audi. Time to take my business to the online channels for sure!

Its all about how it fits in the canal. That custom mold is specially made for you, those generic domes are not. When you get that perfect fit with the correct size vent, that can be an amazing combination for some people. Ive had patients, that no matter what you did, could not handle molds. So you had to get creative with lesser power speakers.

Glad to hear you have the mini pro on the way. Did you get the software too? Keep in mind that the Genie 2 available for download is not compatible with the OPN. Need to get the little flash drive from Oticon.

Glad to hear you have the mini pro on the way. Did you get the software too? Keep in mind that the Genie 2 available for download is not compatible with the OPN. Need to get the little flash drive from Oticon.

Oh? This is news to me. @pvc @Abarsanti I’d like to ask PVC and Abarsanti (Tony) if they’re aware whether you need a software from an Oticon flash drive in order to work with the OPN or not. I always assumed that the downloaded Genie 2 version should work just fine because Tony has the OPN and he was able to get it working just fine (even firmware update) with the downloaded Genie 2 software.

I had it happen to one of our programming computers. It has the standard Genie 2 download and we couldn’t program the OPN 3. Called Oticon and they said we needed the newest version, and the only way to get it was them physically mailing it to us. I had a good laugh at how ridiculous that was.

Genie 2 worked right from the start with my minipro without needing any additional software. Downloaded it straight from Oticon and it works just fine for me with my minipro.

I had it happen to one of our programming computers. It has the standard Genie 2 download and we couldn’t program the OPN 3. Called Oticon and they said we needed the newest version, and the only way to get it was them physically mailing it to us. I had a good laugh at how ridiculous that was.

That’s interesting. Maybe the latest version of the download had been crippled, restricting its use on the OPN so they can control the SW now? Maybe we have to share older downloaded versions that didn’t have this new restriction?

Possibly, or it might be limited to the OPN 2 and 3. The OPN 1 was out months before they were.

Genie 2 is for Opn, only. Everyting else (aside from Opn) is programmed by Genie.

Plus Genie 2 has an Update feature, Genie Updater.

I don’t have Opn’s yet so I have not yet used Genie 2.

Something doesn’t make sense. Maybe someone got confused? Besides it works okay for @Abarsanti