Noahlink wireless - which HAs can it program?

I’m currently testing phonak marvel, but I might go test few more. However I still want ability to program them with noahlink wireless.

From latest generations of major manufacturers, which HAs are programmable with it?
Oticon OPN S, resound quattro linx are?

Or maybe it’s shorter, beside widex, whose HAs don’t work with noahlink wireless?

What about previous generations and not the latest ones?

I know that no other aid from Phonak can be programmed with NL Wireless apart from the Marvel. (You properly already knew that.)

Zebras, I believe you might be wrong in saying this. I wear Phonak Brio 3 UP from Costco and remember them using the Noahlink wireless to program them.

Hm, for some reason I thought beyond also can…

No the Venture and Belong use the iCube II.

Hm, I found this in some phonak b2b brochure

Audéo B-Direct, Phonak Target 5.2, and Noahlink Wireless team up to provide a completely wireless fitting solution that does not require a body-worn fitting device.

So, B direct is something else?

According to Target, the Belong Direct 50, 70, and 90 all use Noahlink Wireless, whereas all of the other Belong devices use the iCube II.

According to Target, the Belong Direct 50, 70, and 90 all use Noahlink Wireless, whereas all of the other Belong devices use the iCube II.

My word, Phonak make it all confusing.

Yeah it is, but I think the FM and Rodger products you have been discussing on the other posts, is way more confusing, a real mess.
But the product in question is the Audeo B-Direct which was the very first product to use Phonak’s new Sword chip (version 2.0) this is why it needs the Noahlink, just like the Marvel platform.

Oticon; Oticon adopted Noahlink Wireless starting with the Opn model. But wait, some ITE/ITC/CIC (non 2.4 GHz) models are not compatible, so we can’t really say all new Oticon models use Noahlink Wireless. See image below.

Widex; Fuggedaboutit. They did not adopt the Noahlink Wireless standard at all. The newer models beginning with DREAM and also (UNIQUE, BEYOND, EVOKE, MOMENT) use the Widex proprietary wireless programming devices (PRO LINK and USB Link), and even the ridiculous NOAHlink/nEARcom wireless combination.

Phonak adopted Noahlink Wireless but did so in a mid-platform/haphazard style as follows;

Phonak’s next platform B-Belong; Yes, but with a big surprise. Let’s rewind to 1Q-2018 for a look at the details of Phonak Audéo V90/Brio2 <-VS-> Phonak Audéo B90/Brio3. The two Phonak platforms (B-Belong and V-Venture) are almost identical except for one new model, the Audéo B-Direct (which has the new SWORD chip). Other B-Belong models are same as V-Venture models, aside from cosmetic-case-changes, and some Sound-Recover2 improvements over Sound-Recover. So yes, you can use Noahlink Wireless on the B-Belong platform. But only for one model, the Audéo B-Direct. See image below. As an aside the iCube II is not supported on the one new model in the B-Belong platform. That obviously signals the end of support for iCube II.

Phonak next platform M-Marvel; Now finally, you can use Noahlink Wireless for the other models that have now been updated to use the new SWORD chip. See image below. As an aside, the proprietary iCube II wireless programming device is no longer supported. 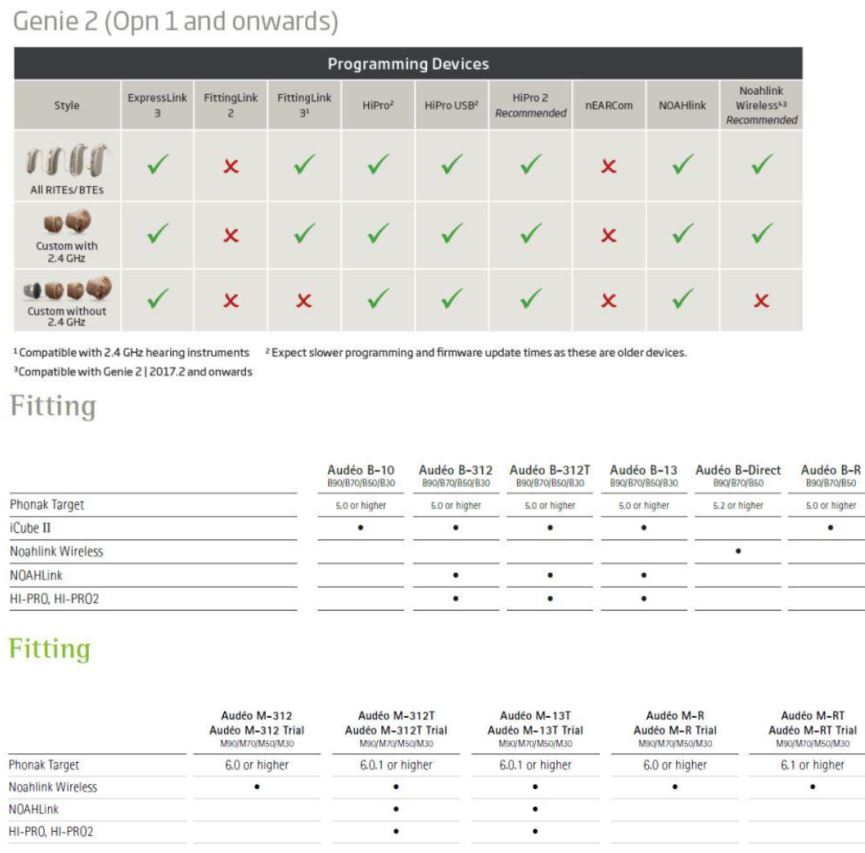 It’s a tuff question the OP has asked, good one but difficult.
People really need to research things before jumping into DIY.

@pvc thanks for detailed explanation. I hope it is gonna help to others to choose aid if they want self program and with that device.

Hopefully in the future they will all shift, including widex

Fun is to see that noahlink can be used for more models than noahlink wireless.

My hopes are the Noahlink Wireless will be as versatile as the HiPro has been.

Am I right in thinking there is no device that allows programming of both bluetooth and non bluetooth hearing aids?