I’ve know about JOIN® for a while and always been interested in their device. After doing some heavier research and speaking directly to them they are infact owned by Resound, and the aid they sell is identical to some Resounds aids (I can’t be sure but I think their version is either the Resound Key or Quattro) JOIN hearing™ devices are small and innovative. Our industry-leading technology offers high performance and low power consumption with a crisp, balanced, distortion-free sound. With excellent abilities to single out speech while capturing the...

They are advertised as no audiologist required and ready to wear meaning they’re aren’t set to a particular degree of loss or your personal audiogram, just the ability to increase and decrease the volume.
To be clear I have a very minimal low frequency hearing loss which I can get by without hearing aids with - but these devices are specifically aimed at the issue of speech clairity which gives me the idea they may benefit me.

Looking at the tech specs on joins site they seem to use the exact same processing as Resounds top line of shering aids.

They’ve so directed me to their iOS and Android apps today (BeMore in app stores) which are identical in operation to the Resound 3d apps for their aids.

So, would you guys think it’s worth ago at £499? They offer 100 day money back guarantee which is good.

As a side note I noticed that the Resounds are programmed by the noalink wireless 2hich I already own - surely if there are Resounds the residue software would allow me to reset them/remove any limitations put on by join? - saying that though, the app actually gives all the same options as the resound app, and seems to have no limitations, but I won’t know I til I purchase and connect them.

What do you guys think?

They are advertised as no audiologist required and ready to wear meaning they’re aren’t set to a particular degree of loss or your personal audiogram,

Really, well they won’t be of much use then.

just the ability to increase and decrease the volume.

What good is this? You need the correct gain in a particular frequency, no good increasing the gain in the lower frequencies if you don’t need it!

If you can’t program them to your personal hearing loss, they are completely pointless.

So, would you guys think it’s worth ago at £499? They offer 100 day money back guarantee which is good.

Well why not trial them in-store “before” you hand over payment?

Well this is the point I’m making, if they are using ReSound Aventa or SmartFit then they are more then “just volume control” but again they could be “locked” so that this can’t be done by anyone else, you need to ask them directly about this before you hand over payment, you need to be absolutely sure about what you are buying, ask the hard questions before committing.

@darrenjames84: Please have several cups of coffee while you read @tenkan’s post over a few times, to let his excellent points sink in.

Agreed! That’s why I asked here as I know others will know better than me.of what to consider.

I do have very minimal loss, and from the site and speaking with them directly it seems they’re set up to accomodate a ‘geneneric’ high frequency loss.

I’m tempted to try them free for 100 days as they offer a zero issue money back guarantee.

What would be great is if they connect to fitting software using my Noah link wireless so they can. E fully programmed, but I would assume they will come locked.

Appreciate all the advice guys.

@darrenjames84: I think from reading your last post that the reality of the JOIN value proposition has been misunderstood: anything that has only a volume control is not a hearing aid - it is a (poor) OTC amplifier. IMO, £499 is a lot for OTC amplifiers.

[Addendum: I sometimes think people with minimal loss who want better speech clarity and buy these devices are like dyslexic people who buy magnifying glasses in the hopes they will improve their reading comprehension.]

I do understand, I should have also mentioned I have mild high frequency loss, which gives me a little confidence that they may help with speech, but what had Intrigued me most is that after asking about their accompanying app, and downloading it, it’s identical to the resound 3d app - with all the same programs and custom settings to ammend. It’s called BeMore and is simply a copy of the official resound app.

I may order them just to see, as I have nothing to lose, as they are returnable. 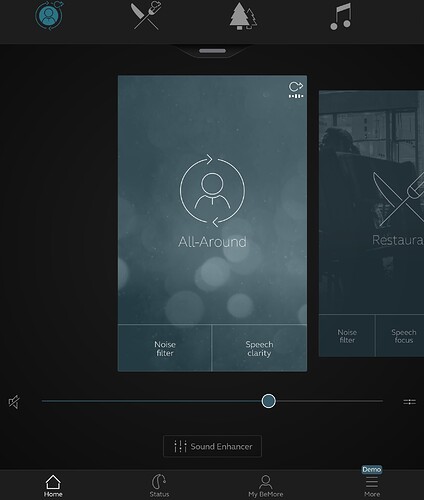 @darrenjames84: Well, you’re clearly rational and much better informed than I, so sincere wishes for your success from me!

I appreciate that thankyou

What you can actually adjust is a function of the hearing aid rather than the app though. 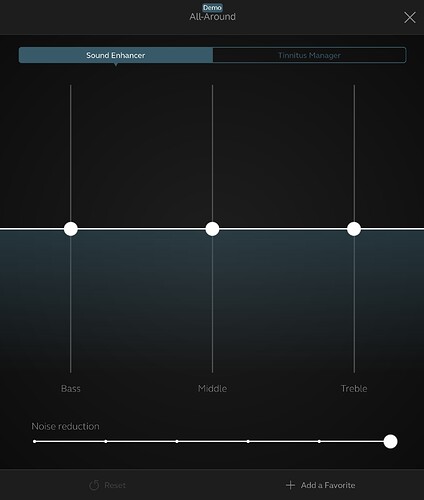 Those are visible in the BeMore app also

@darrenjames84: Aren’t you the same guy that takes hearing aids apart and can’t get them to go back together? Have you given up on them? They are at least “real” hearing aids.

These look like resound quatros hearing aid, avoid at all cost!

Well I wouldn’t say I’m “that guy” considering it happened once…not something I make a habit of.

@darrenjames84: Sorry: I should have said “the same Member”.

I don’t think we know enough about how these work yet. My best guess is there will be an on line or imbedded hearing test as part of the set up. These are marketed as the new hearing aids that are over the counter, not as PSAP devices. Time will tell how they work. I think similar to direct to consumer aids now available.

These are marketed as the new hearing aids that are over the counter, not as PSAP devices

Yes and that’s a big difference, I’m thinking also that’s there more to these then we know at the moment, settings for an audiogram and being able to connect them to Aventa or SmartFit software would be fantastic, as just using the app without anything else just doesn’t make sense.

Ie ordered these as I’m very intrigued. Will return if no good.
I have a noalink wireless and I’ve downloaded the resound software. I’ll report back here once I see if they’re unlocked or not.

As a side note these have been on sale for at least a year as I’ve been going back and forth between their site reading up on these every few months and when my others recently broke (my own fault) I thought I’d check these out.

The p90s these are replacing were obviously better hearing aids, but the only reason I got them in the first place was because I saw them at a bargain price and wanted to learn about potentially programming my own aids in future and because my loss is so slight I’m not too concerned with settling down with a certain device right now, I’m quite happy exploring the options for a while and seeing what’s available via other routes.