Hello All,
I’ve considering buying one, I am aware that professional type units costing many hundreds of dollars or more, and this is beyond what I am looking for and can comfortably afford.

I’d like finding something that works as advertised, has a small enough suction tip nozzle to access very small areas such as Mic Areas of my Phonak Virto V ITC.

Look up Jodi-Vac. Several forum users speak highly of it.

Hi, I have seen these Jodi-Vacs advertised on the web, and were ones I’ve considered for purchase.

I have commonly seen two models, one a consumer version, lower cost, Vacuum Unit is in a Black Housing, and then a “pro” version, with a White Vacuum Housing, and of course more expensive.

Was then wondering for all intended purposes, would the lesser unit be adequate? Would also wonder if the vacuum nozzle tip is of the same similar size?

Reason I ask is the mic holes on the Phonak Virto V are darn near microscopic in size.

I think most forum users use the consumer model. Just do a forum search for Jodi-Vac and you’ll find lots of commentary. Can’t comment on nozzle tip, but most people seem quite satisfied.

Quite a few years ago there was a suction device that was spring operated and did quite a good job on mic. openings. It was called Centrum Tool but they are no longer in business. I have one new/old stock left. They were $25. I can send you a picture if you are interested.

I have no idea how they clean my hearing aids but I send my hearing aids for a ‘clean and check’ test every year and I really notice a different for the better after they are cleaned.

I had a “clean and check” at Costco yesterday. She used a small can of compressed gas, probably air, to blow over the HAs for a second or two. Then she changed the wax guards and click domes.
Oh, and she checked a battery, which was fine. I told her it would be since I changed both batteries two days earlier. I have KS8s.

One of the biggest problems that can be resolved when a thorough cleaning is done is skin oil, moisture and cerumen on the fine mesh screen that is used to protect both the mic and receiver. They can look clean and shinny under microscope but the shine can actually be skin oil and dramatically reduce the high frequency amplification. When I used to present seminars, I had before and after test strips from my Frye box and the difference could easily be 15dB at 2500 hz. That would be very noticeable to the user.

Amazon offers several hearing aid vacs. This one is under $60. I don’t know if it works well: 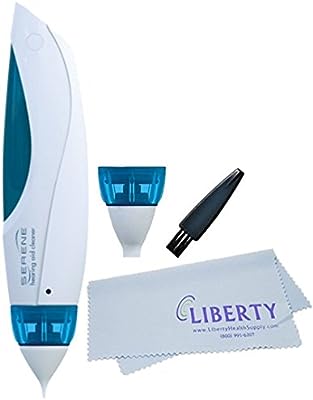 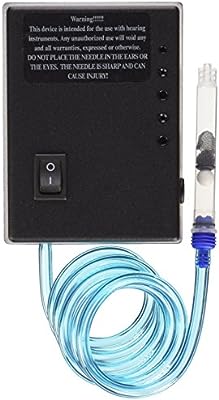 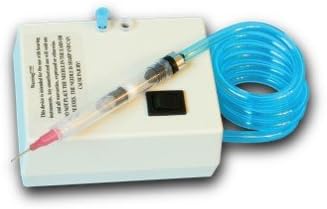 I personally don’t have any experience with these because I put a blower tip on my air compressor and blow out the microphone slots (after snapping each cover off of the back of my hearing aids). 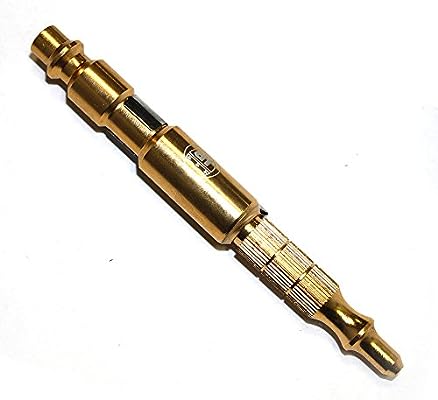 Hope this is helpful.

I have the entry level pro vacuum from Lightning Vac. It was under $200 about 5-7 years ago when I bought it - still is. And it is still going strong after years of use. It came with several needle tips with different diameters. It replaced a consumer version from Jodi that failed on me. 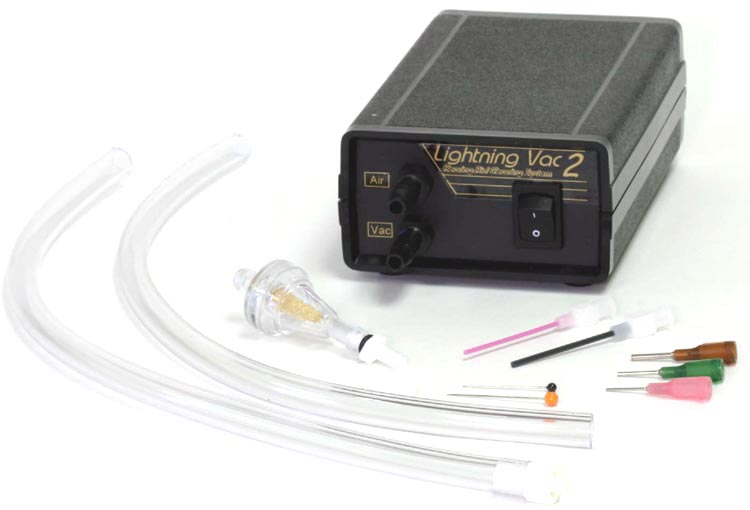 No affiliation with them.

Update on use of Jodi-Vac.

I’ve been a Jod-Vac user for over 2 years now. It’s great for vacuuming lint off microphone openings, cleaning ear wax out of receiver openings and off mold surfaces.

When I got mine in December, 2018, the vac just came with a narrow blunt-ended PINK needle. Now, in addition, other needle sizes are available. A much bigger bore BLACK needle and a much narrower bore BLUE needle.

With the pink needle, I have enough wax on the outside of my molds that the syringe needle would clog at least several times in vacuuming each mold (same when I wore domes). The bore of the black needle is big enough it can suck up all the wax off a mold without clogging once while still having excellent suction. I highly recommend getting the black needle if you haven’t tried it already (someone else has already mentioned the black needle in passing in another thread on cleaning HA’s but I thought I’d second the finding and put the news out front and center in a thread devoted to the Jodi-Vac).

The blue needle is much narrower and could conceivably be inserted into a microphone opening (the pink needle can’t). When buying supplies from Jodi-Vac, I suggested that blue needle might be better than the pink needle if used very carefully to clean microphone openings. Kat read me the riot act. DON’T EVER DO THAT! (or something like that, in all purple caps at a very LARGE font size!). The official use of the blue needle is: “for Thin Tube (Open Ear).”

The descriptions of currently available Jodi-Vac supplies is on the following web page. When I got my Jodi-Vac, the Jodi-Vac itself was cheaper on Amazon than direct from Jodi-Vac but at least some of the supplies have to be ordered directly from the company. Jodi-Vac - Jodi-Consumer - Consumer Hearing Aid Vacuum Product Details The company service is great and very prompt!

I do wonder, since I use my Jodi-Vac every day, whether the modest vibrations transmitted down the vacuum tubing to the needle tip from the device pump might have something to do with the several HA body failures I’ve had. I used to press the needle tip hard against the microphone openings the better to make sure I was sucking air through the microphone openings to clean them out. Kat took a dim view of the vibration hypothesis (I suggested better insulating the tubing from the pump movement). So now I’m skimming the surface of my HA body as lightly as possible with the needle tip. It does seem as the Jodi-Vac wax filter on the pump gets filled up, the pump labors more so maybe I should just be changing out the wax filter on the pump a bit more frequently rather than letting it fill completely up (~1 year between changes for me, heretofore).

I got the Jodi Vac for cleaning HAs , it works great … But I use it for fine cleaning lots of different things now as well. I should have gotten the Pro model. For HAs alone the cheaper one is fine.

Is there an alternative to a Jodi Vac as I just looked on eBay and they are $200 plus.

Well, I get my eyes opened on a regular basis, here on the Forum:

Initially, I thought that the idea of vacuuming HAs on a regular basis, at home, was a little " over the top" … okay I admit it. That was my initial reaction.

Just now, however, I fired up my trusty iPhone SE magnifier to look at my mic ports. Yikes! despite the fact that my ears aren’t very waxy, there were, indeed, flakes of cerumen in those small openings.

I tried to gently brush them away with my handy-dandy Phonak brush (don’t tell the Oticonian Office of Tribal Purity) but the wax adhered stubbornly to whatever the fabric is that screens the mic ports.

So, I’m now convinced that:

Since I don’t want to be troubling my audi every month for a vacuuming, I think that I’ll ask MrsSpud for some sort of device for my upcoming birthday.

Live and learn!/Thank you, members, for taking the time to teach!

trusty iPhone SE magnifier to look at my mic ports.

I’ve got the new SE.

How do I get the magnifier up?

Don’t know what UK availability is

Found a UK site selling the basic one for £93 which is a much better price.

Bring up your control panel and look for the magnifying glass icon.