What is latest firmware version for Oticon Opn? (Not the Opn S)

Wondering what the latest firmware version is for Opticon OPN1 hearing aids? Last update I got was last spring to v6 I believe. I’ve read v8 is out, but it was mentioned for OPN S and not sure if it also applies to OPN 1 (the previous generation to the OPN S)

That depends on the aids. My ITE OPN1 aids 6.1 is the latest. Most with MiniRite aids it is 7.0

I now use OPN S 1 aids as of August 2019 - my older OPN 1 mini-RITE devices were sent to Oticon USA in September 2019 for repair and cleaning and so on.

They were returned to me on 1 October 2019 with different serial numbers. My provider updated the firmware on that date prior to installing the programming. The update was to Software 6.1, Firmware au2cs3fw5.16.1 according to the older ON app that reported that info. I don’t know if there is a further update for my OPN 1 devices as I don’t yet have a programing device to use with the Oticon firmware update program (part of Genie 2). Other members of the forum who have a programming device and software may be able to give you more up-to-date information.

On the same date, the firmware in my OPN S 1 miniRITE devices was updated to Software 8.0, Firmware auroafw7.6.2 according to the older ON app. The current ON app on iOS (2.0.1) reports only 8.0 along with the serial number of the OPN S 1.

It may have newer firmware versions for the OPN S, but for the OPN 1 miniRITE, it is 6.1.

I just did a “check update” on my Genie software install and it says that there’s no new update found.

But for the last several versions of Genie 2, I usually heard about a newer Genie 2 version before the update was made available on the official site, so I had to download the early release version from whatever site they became available early on. The 2019.2 was downloaded from the Oticon UK site. The version before that was from the Oticon Canada site. The Oticon USA site tends to release it later than the other sites from abroad.

My Audi told me on January 6st that the MiniRite aids can go to version 7.0. Now is that all of the mini rite aids I do not know.

Current version of the OPN1 Mini RITE is 6.1 using Genie 2 2019.2. My pair came back from Oticon yesterday (1/10/20) as 6.1 (the same version they were submitted for repair), so I don’t think they have a new version for internal use or repairs either.

I have had the OPN 2 since 2017, last had them programmed in 12/18, but the audi didn’t think there was a reason to upgrade the firmware.at the time to version 5. She said the only difference between version 4 and version 5 was the Hearing Fitness program or unless I bought a Connect Clip. I was thinking about getting one, but never did. So I’m way off on my firmware version by still being on version 4. I’m having them re-programmed tomorrow. I’ll make sure the firmware is updated.

My audiologist confirmed latest firmware for OPN1 is 6.1.

How can I find out which firmware version I have in my Oticon OPNs? Through the Oticon ON app on my iPhone? Where?
Thanks for your help…

Many thanks, @e1405!
I see that I’m at 6.0, which might explain some of the Bluetooth linking problems I’ve been having ever since iOS 13. Time for a visit to my (almost useless) audiologist.

My OPN1 minirite show firmware 6.1 I suspect there’s a newer version, but wonder if it’s worth my while to travel 500km to Bangkok for an update. The hearing aids work ok…they’re my backup pair. But if there’s an update that would make a difference, I wouldn’t mind taking the trip. Thanks

My OPN 1 is also showing 6.1. I’m a DIY so I do my own firmware update. If there’s a newer firmware in Genie 2 for my OPN 1, it would have notified me already. But I haven’t seen anything newer than 6.1. That latest 6.1 firmware seems quite stable and not giving me any problem, so it’s very unlikely that Oticon would try to do another firmware update after 6.1 anymore.

Thank you for that info. I agree, the HA themselves are quite stable.

Have you updated Genie2??
Looks like there is an update, downloading right now.
Download is going slow, probably many downloads going on at the same time.

Yes, I updated it yesterday. It does take a while to download, then another while to install. But I’m sure that yours is probably all done by now.

One interesting thing is that I was curious whether I can access the complete source from the oticon.com/help website like before for Genie 2022.1 or not, and this time it directs you to another site (myoticon.com) that requires filling out a complete and detailed credit application, which I did not do. Luckily, with the already loaded previous version installed, I just ran the updater and it knows where to look and update for me automatically.

Below is the update note somebody posted in another thread for 2022.1. Also note that the new 2-way hands-free phone call features for iOS MFI is not available for the OPN and the OPN S on the Velox and Velox S platforms. It’s only available for the More models that are on the Polaris platform if the More is updated to firmware version 1.3. 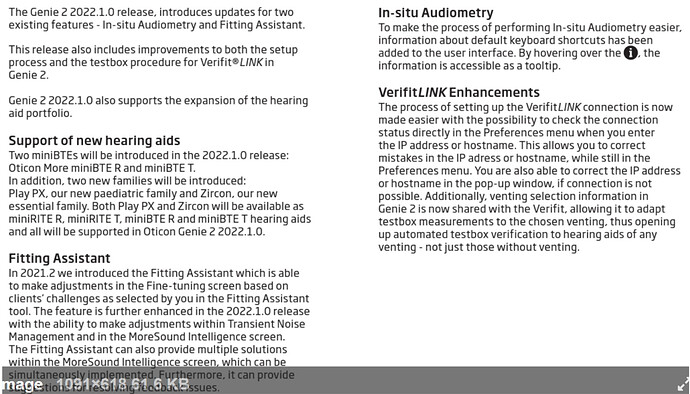 Yes, just updated from the original installation.
No requirement to go to another website.