Question: I currently have Oticon Opn1 aids, they are 3 years old, I have zero issues. We relocated recently and discovered our new medical insurance will pay 80/20 for hearing aids (BCBSTX). I was at the audi today and discovered the caveat…They chose what technology level they will offer at what price and there is NO option for anything else. For example, They will pay 80/20 for the More3 however if I want the More1 I have to pay the full cost ($6500) not the difference between what they would pay and how much they cost; No if’s end’s or but’s. My choices therefore are, keep my Opn1 (which im happy with), pay the full cost of the More1, or use my insurance benefit and get the More3 (which will cost me $650 out of pocket).
Is it worth it to go from the Opn1 to the More 3??
Many Thanks!

If it helps…I’m an RN that works in a busy emergency room as well as on ambulances and helicopters to say my listening environment can get chaotic is an understatement.

Are you in a position to trial the More 3?
See if you like them.
Your Open 1 aids are good aids.

I am afraid you will be disappointed in the More 3 aids they don’t have the same level of options that the level 1 does. But would give them a try to see if they will do what you need and want.

I absolutely thought about that…just wasn’t sure if it would even be worth it?

That is my fear as well. Thank you!

I don’t know if you have any feedback issue with the OPN 1 or not. If you do, then the More 3 has the new feedback prevention technology called OpenSound Optimizer carried over from the OPN S, and is now called MoreSound Optimizer, but still the same thing. This may be helpful for your feedback issue if you have any. This technology is full featured in either the More 1, 2 or 3 (like it is in the OPN S1, S2 or S3), because they can’t really cripple it down like the other stuff.

I understand what your saying here…Yes, I do get to keep the opn1, yes they are out of warranty (unfortunately I realized too late to send in for once over prior to warranty ending), and yes…terrible feedback with the open fit domes, I can minimize that feedback with double vent domes that I widen the vent holes on, but I like the way I hear better with the open fits.
And I guess you’re right 650 for a pair of more 3 is a good deal any way you look at it. I was thinking its probably good to have a back up pair (which I don’t now).
Honestly, I don’t have any programs (except a long press for off/on which I need in order to use my stethoscope quickly), or do anything fancy, just need to be able to hear in noisy chaotic situations.
Perhaps I should at least give em a trial.
Thank you for your input, I truly appreciate it.

Your audiogram shows the 2000 hertz hearing loss in the 40-50 dB range. This rule of thumb can be used to use power domes or even custom ear molds. This in turn will minimize feedback issues if not totally eliminate it.

Looking at the speech banana helps to understand this reasoning. 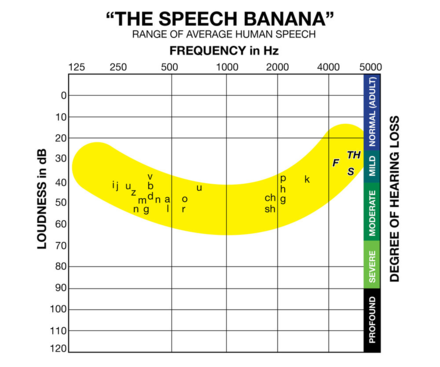 I get a feeling that you’re going to like the More 3 a lot if you prefer the open dome for minimal occlusion. That has been the hallmark of the OPN S’s feedback prevention technology, which is also carried over to the More as a whole without any degradation between the More 1, 2 and 3 line. So much of a hallmark that when they released the S, Oticon touted the ability to wear open domes and not having to worry about feedback as the key breakthrough they had with the S.

Another thing is that I think the handicapping between the More 1, 2 and 3 is probably less severe than that of the OPN 1, 2, 3 or OPN S1, S2, S3. That’s because on the OPN, the most significant handicap is on the Max Noise Reduction value, in which the OPN 1 has 9dB, OPN 2 has 5 dB and OPN 3 has 3 dB. This makes the OPN 3 not have as optimal a performance in noisy environments.

As a result, you can see by the comparison chart below on the MoreSound Intelligence section that most of the differences between the More 1, 2, and 3 are more along the lines of options and configurations, and less along the line of noise reduction. Even the neural noise suppression, which I think is not really noise reduction in the convention sense of SNR, but more like more optimal or less optimal balancing of sounds, the Difficut Neural Noise Suppression of the More 3 for Difficult environment is at 6 dB, the same as in the More 2. The Easy environment for the More 3 is at 0 dB, but it’s less consequential in my opinion because Neural Noise Suppression is probably not really needed for Easy Environment anyway. The Spatial Balancer of the More 3 is the same as that of the More 2, at 60%. So if these 2 crucial parameters in the MoreSound Intelligence (for speech understanding) are almost the same between the More 2 and More 3, then I think the More 3 will probably perform more or less the same as the More 2, except that you have less options and configurations to choose from, that’s all.

The MoreSound Amplifier is another key technology introduced in the More line and not available in the OPN line. But as you can see, it’s not watered down between the More 1, 2 and 3 at all.

I wear an OPN 1 but I had an opportunity to try out the OPN 3 for a couple of weeks and I’ve posted a review of the OPN 3 here on this forum. Overall, I found the OPN 3 still a very respectable hearing aid when compared to the OPN 1, just slightly lagging in a few areas. My hunch is that the More 3 is also going to be almost as respectable in performance compared to the More 1, and if money is a significant consideration for someone, the More 3 may even be a better choice in terms of value for the money. But naturally speaking, I don’t have any experience with either the More 1 or the More 3, so this is all a guess for now of course. 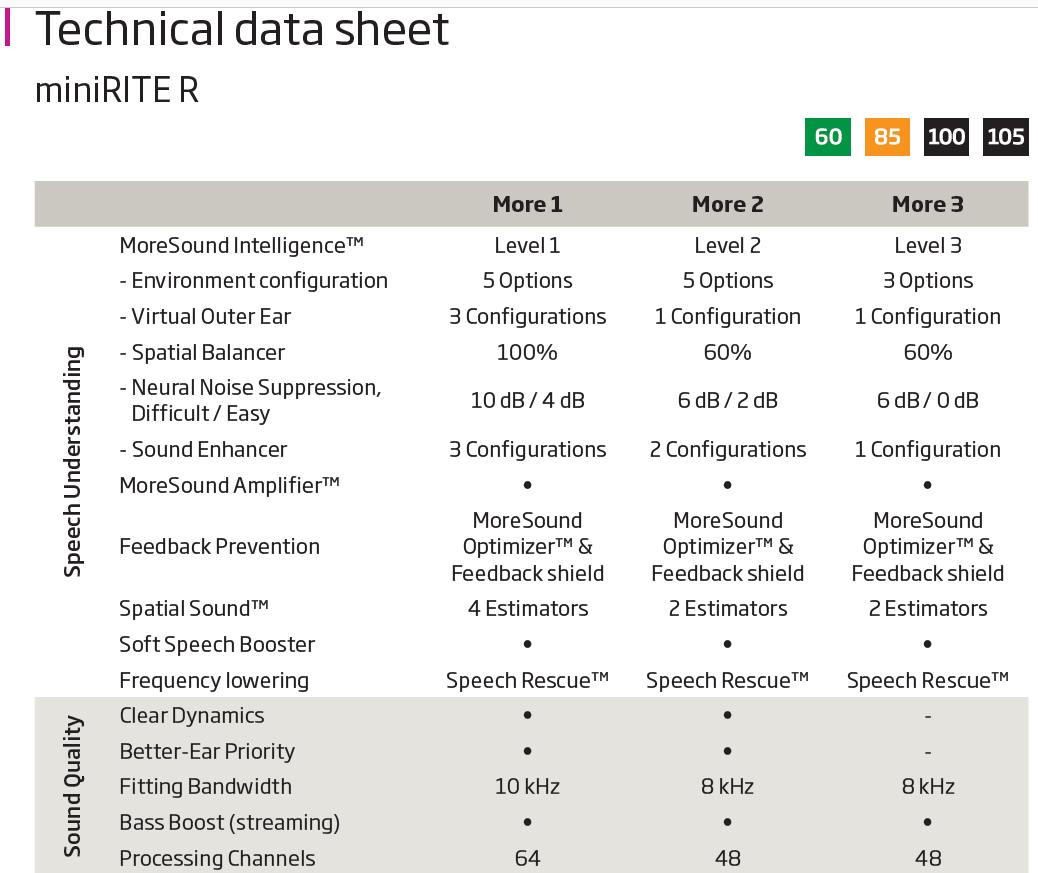 Very Interesting! Thank you for sharing. No one has ever suggested power domes before…The audi yesterday suggested we try Oticons new openbass domes.
The issue is…I use an amplified stethoscope at work, Im able to leave me hearing aids in, turn them off, and put the eartips from my scope in my ears with the hearing aids in place and listen. If I have domes that occlude that, it would be a problem…and no, taking the hearing aids out and putting them in my pocket is not an option…They would get contaminated, destroyed, or I’d lose them.
Although I have noticed lately Im turning my current aids up (which causes more feedback) or leaning in close to my patients to understand what they are saying. Now that I see the speech banana, makes sense.

Volusiano, Thank you for sharing your knowledge. You are always helpful and I can’t thank you enough. I have a difficult time understanding these things.
I just updated my audiogram to the one I had done yesterday. I have no idea what this means, but my speech recognition scores were r 92% L 90% at 7.5 db HL…does that factor in to the neural noise suppression?
And I think I’m understanding…the 2 and 3 are basically the same (for all intents and purposes) one just costs more than the other. And the ‘options’ probably are not as important because I don’t use them anyway, I don’t have any programs on the opn1, I literally never touch them once they’re in my ears other than to adjust volume or turn off/on, but no programs for different environments so I’d probably be perfectly fine with the 3’s. Makes sense.

I just updated my audiogram to the one I had done yesterday. I have no idea what this means, but my speech recognition scores were r 92% L 90% at 7.5 db HL…does that factor in to the neural noise suppression?

Your audiogram and speech recognition scores are not terrible at all. Based on my understanding of the MoreSound Intelligence whitepaper, the neural noise suppression is just Oticon-speak for the deep neural network strategy of balancing out sounds in various environments better to improve the appearance of signal to noise ratio improvement of various sounds in the sound scenes. While it doesn’t have direct correlation to audiogram and speech recognition scores, I would say that the MoreSound Amplifier new technology in the More line should help with give you better amplification compensation you need in your high frequency hearing loss (in the More 3 as opposed to the OPN 1), and the MoreSound Intelligence should give you a better balanced sound scene that should help improve your speech recognition, although 90% is not a bad score at all to begin with.

If you’ve been happy with the OPN 1, I think you should be happy with the More 3, especially for its MoreSound Optimizer feedback prevention technology, which hopefully will let you wear open domes unfettered by feedback issues.

This seems like a contrived crisis. Unless the insurance plan is slated to disappear, then enjoy the Opn 1 hearing aids until your find yourself dissatisfied. The options may have changed by then.

Which one stethoscope do you have? Stethoscope with bluetooth transmission?

Litmann 3200. No bluetooth to aids.
I tried the eko which did bluetooth, terrible, even with volume all the way up I couldn’t hear

You are correct. We are strongly considering moving back ‘home’ in the next few months, not happy with our relocation, and figured I’d take advantage of ins while I can…Ive never had ins that covered aids before. I do have a few months though.

DmQ, how often can you use that insurance benefit? Every year? Every three years? Every 5? I’d say try the More 3 and unless there is a dramatic improvement over your Opn1, then keep the Opn1 until they become not worth repairing. You might get another two or more years out of the Opn1. If you can’t use that insurance benefit again for, say, five more years, you might want to wait rather than use it now on a new aid that would give you only a minimal improvement on your Opn1.

DmQ, you made that last post while I was typing my post that followed. If you’re not going to be covered by that insurance plan in the future then definitely take advantage of that benefit and get the More3.

I’m on the same boat as you, upgrading my Oticon Opn1 to Oticon More 1. If you don’t have any deductible to worry about you can keep your Opn1 for now. Buy the Oticon 3 at a later date. If you do have an option to shop around, try that you may just get the Oticon More 1 for $1000. The oticon More 1 will be just as good or better than the Opn1. It will not be worse than the Opn1.

Thank you! Yes, more than likely not going to be covered much longer…and to answer your question…4 aids in a lifetime it doesn’t say how often.