Hello, first time poster hear. I’m trialing the above as well as the tv streamer.

Into my first week and have had a bit of a bumpy road. Wed my audiologist tried a more closed dome and increased the compression so I could hear higher frequencies. He warned me about the lisp but I didn’t think it was too bad. A day later I was so uncomfortable I took out & went back my old HAs. Today he adjusted prog so no more lisp.

I plan to post back some of my other experiences/observations but that’s it for now.

Wed my audiologist tried a more closed dome and increased the compression so I could hear higher frequencies. He warned me about the lisp but I didn’t think it was too bad.

This sounds like your audiologist increased frequency lowering settings and is trying to improve your lower frequencies too. Sharing your audiogram might explain these changes if you would share it.

Have these changes brought new sounds in? Like birds, crickets, turn signals and house appliance beeps etc. If it has this is good but it might take a while to get used to it or maybe back the settings off a little.

Welcome to the forum! And good luck with your trial

He warned me about the lisp

Hi Blackie, some people put their tongue in a different place in their mouth when speaking.Lisping is when LISP would sound like LITHP. It is a way that they have learned to speak.

A speech pathologist could explain this better than I. You probably have another word for it in German. The word FAST could sound like FATHT. Another example. Thend me thum flowerth. I have never heard of anybody with a lisp as bad as that last example.

When a baby is first learning to talk they pronounce words sometimes in a very interesting way. But as parents speak with them they soon pick up the correct pronunciation of letters.

This may not be Sound Recover. Someone who had severe high frequency loss for some time might perceive some sounds as a lisp. At times, I have done that. But, most likely, it is Sound Recover 2. It takes a while to get used to it. What I noticed was more like sibilance than lisping, though I heard that too. Some people just can’t get used to the artifacts produced by SR2. Hopefully, your audiologist can get the settings so that they help with you high frequencies and you can live with it as well.

Bill , do you have occlusion w/ the closed domes?

Thanks, I’ve never heard about that before.

I’m not German, just living there

Can’t recall if I ever heard about that or people mispronouncing Croatian that way. Only thing that’s common is people who can’t pronounce r. They then learn to compensate with overemphasis and then roll it.

Could be the same thing that happens in LISP case.

We don’t have th sound at all, and I think our alphabet is pronounced like symbols that look closest to the letter itself, when you look at IPA. I don’t know the official name for such speech type, it’s almost like ‘what you see is what you get’

I had to slightly adjust my last two hearing aids. Signia Frequency Shift with NX7 and Phonak Sound Recover 2 with Naida M90. My wife sounded like she was slightly inebreated. Sort of a lisp with “seashells by the seashore”. Anyway, a slight shift of the frequency shift solves the problem.

He made changes and no more lisp. It was causing me severe headaches

My domes are quite a bit larger than I had before with old HAs and much more closed (only two small holes up by tip). Is that what you mean?

Well do you have feeling in your ears like they are plugged.

No, I’ve been lucky with all my fits. Once I put them in I hardly can tell their there.

I wanted to post about my experience with the new tv connector. After having had used the tv link in past I was not too hopeful I would use it. However, it is very good but not great.

I have older AV system so tv not avr or any other device use BT. The audio quality is very good. However, why can’t I mute using the myPhonak app? And the ability to control vol using app is not too great either.

I still have to put it through it’s paces some more but those are my observations so far.

Here is my most recent audiogram 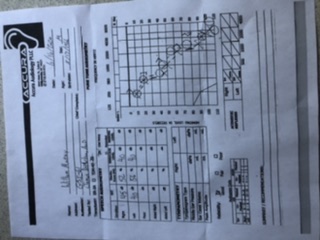