Just to say that we could expect SmartFit 1.15 to be released shortly, as it is required to fit the new Resound Omnia hearing aids which are to launch first in the US in a week or two time.

And indeed SmartFit 1.15 is now available from the usual download site.

There is also an update to Resound Smart 3D for IOS to 1.23.0 which is in the Apple AppStore today. I don’t use Android but I should imagine there will be an update in the Google Play Store too.

Update (as I can’t post again until someone else does (@jim_lewis maybe you could?)

I see today ( Sept 22) that Resound has SmartFit 1.15 update 1 on their download site. When you install and run it, it recommends an update to NoahLink Wireless and there is a NLW updater tool included in the Resound install.

The NLW update took only about two minutes and all worked ok when I then tried 1.15 out, although I didn’t spend any time exploring it.

Good morning, I have been a continuous user of Costco haids, in addition to Brio 5, I also have a Resound Jabra. Could I receive a copy of the Smart Fit? Thanks.

If you look a few posts up this thread, you will see @pvc posted the instructions how to find the link.

Thanks. As soon as I get back home I will install it.

If you need any help getting started, post here!

I will. Until last night late I had time to install both software. Getting into @pvc pages I found a big new world of self-fitting.

Also, my laptop has 8G memory, resound told me I need more, so I am going to put more memory.

Thanks a lot for your support

Also, my laptop has 8G memory, resound told me I need more

8GB is okay and also the recommended size in SmartFit User Guide. 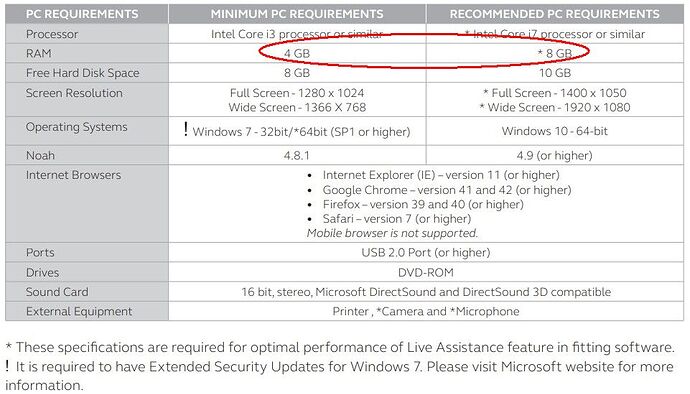 I have just noticed that Resound released SmartFit 1.15 update 2 on 1st December. I don’t know what changes there are incorporated.

My Smart 3D app for the iPhone got updated in the past day or so. ReSound’s update note on the Apple App Store page said the update was for stability improvements and better connectivity. Perhaps the Smart Fit update is related to those 3D app feature improvements? What’s good for the goose is good for the gander?

That’s all Resound ever says about app updates Jim, even when it obviously has added specific new models of hearing aid support.

Anyway I haven’t noticed any change with my Ones with it running on my iPhone 12 Pro under IOS 16.2.