As I didn’t have any batteries, I went to my audiologist. While Oticon literature indeed says that the batteries should be replaced by the audiologist, I was surprised to hear that the audiologist needed to enter the batteries IDs in the system for the HAs to work with the new batteries. Does this make any sense? Can’t the user replace the rechargeable batteries by himself?

@drdigital1: No, the hearing aids have to be “re-zeroed” to the new batteries, as I discovered the hard way last year.

I have seen the hearing tech at the VA clinic change the batteries, giving the battery serial numbers to the audiologist to enter into the Gene2 software, then the aids were put through a diagnostic test then programmed with the saved programs. It took almost 45 minutes

I goggled “re-zero” and I found the screenshot below. It says “fill in new battery serial number” followed by “reset battery statistics”. 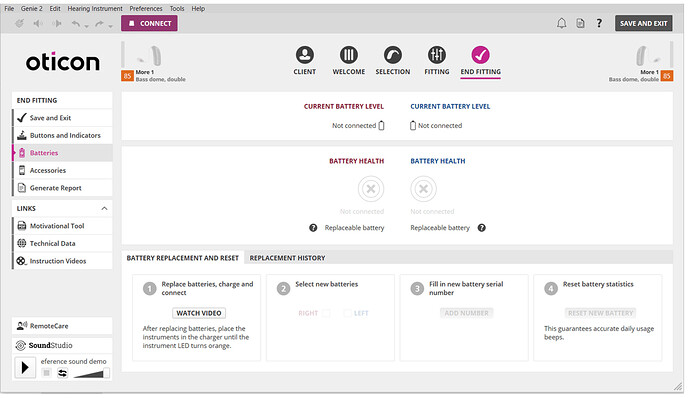 You could enter any number there, even the old battery numbers, I guess it’s just for warranty purposes.

Yeah they could well be, ether way I don’t think the software is gonna lock up and refuse to reset the batteries.

Yeah, it’s unlikely that the software is going to refuse a battery if you don’t use the exact serial number associated with it. I’m guessing that it’s more or less to just uniquely identify the battery so that the usage statistics is assigned to the properly identified battery.

But the statistical data collected on each battery is probably going to affect how it’s going to be charged up by the charger to give you optimum result. So if you don’t do these steps of identifying the new battery and resetting the statistics when you introduce a new battery, you’ll probably get whacky results in either or both the performance as well as the reporting data on remaining charge and what-have-you (like @SpudGunner did because he didn’t know).

What’s not clear to me is that if you enter a serial number of a newly introduced battery into your Genie 2 setup, but this is not a brand new battery, but instead is a used battery from somewhere, whether there’s any smart in Genie 2 to “look up” somehow to collect the historical statistics of the newly introduced battery to your system or not. Or whether there’s a fundamental assumption that “resetting battery statistics” always assumes that a new/unused battery has been introduced.

@Volusiano: Actually, Mr V, that exact question had occurred to me … Exactly!

whether there’s any smart in Genie 2 to “look up” somehow to collect the historical statistics of the newly introduced battery to your system or not.

I wouldn’t think so, as in there’s no “smart” built in to the battery as such for genie to pull information from…well other then it’s voltage.

Or whether there’s a fundamental assumption that “resetting battery statistics” always assumes that a new/unused battery has been introduced.

This is how I would think Genie handles the battery reset, it seems @pvc has done quite a bit of research on these “after market” (gray market?) ones, a few people have been asking him where they can get them, so we should see/hear confirmation on how it’s going to work for those doing DIY.

@drdigital1 , I got my Mores right when they came out, in January 2021. Yours couldn’t be any older than mine. Are you having issues after only 18 months that require replacing the rechargeable batteries? Just recently I have had a couple of instances where my Mores started to beep at me indicating a low battery after maybe 14 hours of wear. That never used to happen. How long are these rechargeable batteries supposed to last before they start to deteriorate noticeably?

Yeah, it’s unlikely that the software is going to refuse a battery if you don’t use the exact serial number associated with it.

A lot of companies are doing things just like this (printer ink/toner, washing soap) to prevent 3rd party batteries from being used. It obviously requires some communication with the battery to do the comparison with, but I wouldn’t put it past Oticon or anyone else. In our favor the form factor is so small that it might not yet be possible to include such a chip in the battery. On the other hand, Apple has a tiny handshaking chip in many of it’s proprietary cables (or at least has done so in the past).

@drdigital1 , I got my Mores right when they came out, in January 2021. Yours couldn’t be any older than mine. Are you having issues after only 18 months that require replacing the rechargeable batteries? Just recently I have had a couple of instances where my Mores started to beep at me indicating a low battery after maybe 14 hours of wear. That never used to happen. How long are these rechargeable batteries supposed to last before they start to deteriorate noticeably?

@ziploc, if I remember correctly, you also trialed for the Whisper system, right? I don’t remember though if you signed up for a lease of the Whisper at the end or not. From the sound of this, you didn’t sign up for the Whisper and continued with your More 1 then?

Sorry for the seemingly off-topic question. But I guess the pertinence of this question to this topic is whether you’ve been using the More 1 exclusively lately until you got the low battery warning after only 14 hours, or whether it’s a sporadic mix of use between the More and the Whisper, if you did sign up for the Whisper.

ziploc, I got my More 1 in March 2021. The rechargeable batteries were supposed to last 3 years but lasted just 13 months. The overnight charge didn’t last through the day even on days with little streaming. The new ones still show 33% after watching 3 hours of TV (Oticon TV adapter).

I got my aids in June of 2021 and I haven’t had any issues with the batteries. Now my right aid uses the battery faster than the left, but that is due to it being the control aid for Bluetooth or seems that way and my right ear is worse so it needs more power for me to hear correctly.
Every time I am at the clinic for checkups, adjustments or updates my aids are ran through the diagnostic test that my audiologist uses.

The subject of Oticon rechargeable batteries has been discussed many times. I read in a couple of places that if the batteries are completely discharged then the life time is drastically reduced. If true, this might be the reason my batteries lasted only 14 months i.e., I experienced a complete discharged quite a few times. And I’ll make sure I don’t let it happen again!

But it seems like the manufacturer has the discretion to build buffer zones around the charging system to allow the battery not to be completely drained nor fully charged, if they want to. Of course the drawback for having these buffer zones is that you don’t get to utilize the full capacity of the battery. In situations where the full capacity is needed and the battery system can’t be over-designed / over-sized to be able to afford having buffer zones, then the users get the short end of the stick.

It seems like you can probably spend 16-hour day on a More battery with plenty of juice to spare, such that Oticon should be able to afford put in buffer zones to prevent complete discharges or full charges if they really want to. Or at least give the users some option to be warned if they pass buffer zones. But apparently Oticon chose not to do any of that and allow the possibility of run-away discharging to occur. That’s shame on Oticon.

Everyone should be remember to require new batteries just before their 3-year warranty is up, then after that, be very mindful to not allow full discharges if they can.

On my normal day my aids discharge down to 30%. I have had only one time I remember that they discharged down to 15%. I have the smart charger for my More1 aids and if I believe they could get too low I care it with me, it only takes 30 minutes to give them an extra 6 hours. The charger can if needed fit in my pants pocket.

remember to require new batteries just before their 3-year warranty is up
My audiologist is pretty good but she charged me for the new batteries (More1 HA purchased in March 2021. No mention of 3 years warranty.