I received my new Phonak Paradise Rechargeables two days ago and made my audiologist perform REM at the first fitting, although he is a strong believer in manufacturer settings. During this first test, he simply ran the software and said that it makes all the changes automatically and we were finished quickly. After wearing the hearing aids for two days, I did not feel they was meeting my needs (saying “what” too often) and just came home from the second REM test and I asked him to make manual adjustments this time to match my targets. This is what my chart looks like now and it still looks off to me. The audiologist told me that being off by 10 is considered a great fit. Are my expectations unreasonable or is this still off my targets and should be fixed. I would appreciate any feedback from providers and people with experience who understand REM, as I am a beginner and just learned about the importance of REM from Dr. Cliff and this forum. Thank you so much for your input! 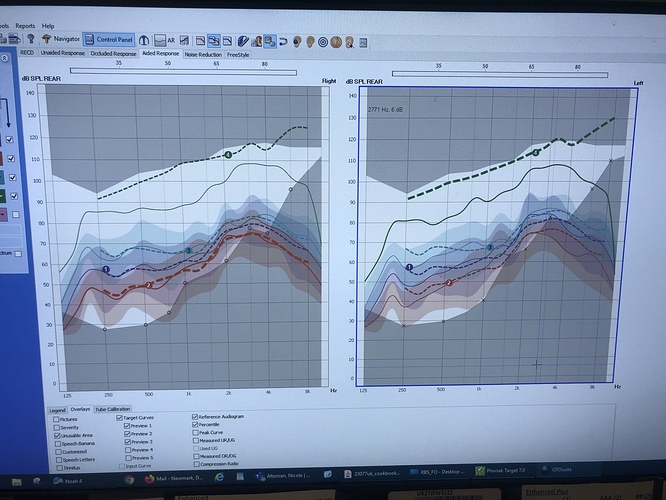 Also here is the summary the audiologist printed for me:) 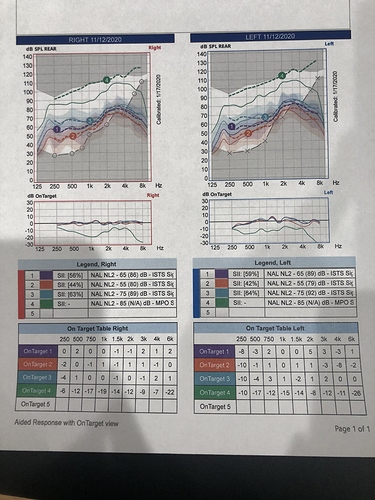 For right ear it looks great.
Left ear is wobbly, I’d probably try once more to align them better, especially if you feel issues. Eg low tones might be problem. But, that’s wild guess.

Better approach:
Try listening with one ear+aid only, same podcast / YouTube video (around same timestamp) and compare what you hear/understand, and what’s missing.

If everything is similar, then ok. If you see noticeable difference, then see which ear is better and then try adjusting other ear to mimic that fitting more.

Oh and line 4 looks like maximum output, eg how loud will be loud sounds and he fitted them towards maximum of the aid (border of white area) and not prescribed target. I don’t think that matters unless you’re sensitive to loud sounds. You’ll know that.

I don’t even have that one fitted.

Others are mostly in ±2 range, which is awesome, and those points where they are 5/8/10 it could be the limitations of the aids.

Since it is not possible to say to the aid ‘send this frequency at 45 gain and the one next to it at 20’ but those are interwoven and changing one affects those around it.

I started with almost perfectly aligned graph, but we tweaked that since it wasn’t the best help for my distortions, so that I can get better results. And results we measured - doing wrs with aids on and words through the speakers. So, don’t fret too much about the lines, they’re just starting point anyway, focus on what your brain can work with better.

Both aids are 15-30dB below target across all frequencies, getting worse in the HF where they are aren’t even meeting your threshold.

Your Audiologist is either talking nonsense or doesn’t understand the results.

Hm, can you explain then where you see that?

The threshold of hearing is shown shaded grey.

The output doesn’t get above this line in the high frequencies at all. You want the output to be sitting in the middle of the available dynamic range all the way across the chart.

This looks like a poor first fit or the experience level is miles out.

The output doesn’t get above this line in the high frequencies at all. You want the output to be sitting in the middle of the available dynamic range all the way across the chart.

But you can’t affect the calculated target lines, or? This sw looks like the same as my fitter has.
It’s using nal-nl2, and shows its targets, full line.

Dashed line is what’s measured that aids send to the ear.

If we assume nal-nl2 knows what this person needs based on audiogram, then fitter did hit those targets. In other words, fitter did proper fitting.

What you are saying, sounds to me, that you say nal-nl2 prescription isn’t right because it doesn’t exceed the threshold in high frequencies.

And that’s something entirely different, no?

Fitter can give more gain to exceed the threshold, but then it isn’t rem fitting to nal-nl2 targets anymore, but further tweaking, since you’re deliberately ignoring the recommendation for the targets given by nal-nl2 prescription.

So, did I understood that you’re saying that fitter should ignore the target lines and nevertheless push to go above threshold?

The NAL target shown is meaningless averaged nonsense here in the context of the ACTUAL dynamic range.

This might just be my reading (and it’s not the software we use) but the whole output looks massively short of where it ought to be - I assume the scaling should be in dB SPL not HL too, but even given this, the proportionality is all wrong.

and it’s not the software we use

Could be this. My fitter uses aurical devices, but I don’t know model or sw name. His screen is totally similar to this above, with difference being labels for lines. Even colors are the same.

Those dashed lines show when speech comes through the speaker, they dance a bit and then settle down when the track ends, but they dance around with each spoken ‘word’ and readjust their position. This wawy shaded area is where speech happens.

So, up to 4k I still think everything is perfectly fine. Aids deliver exactly what’s prescribed.

Does that matter? That part I’m not sure about.

I remember having below threshold at 1khz I think by prescription, and my fitter immediately pushed my dashed lines just above it, but if I remember correctly, either he or I returned that gain down, because my speech comprehension was better when following prescription, despite not reaching the threshold.

We checked how I do by simply doing wrs with aids on and me commenting if some words were harder than others. Such test I recommend doing, that way both sides will know what happened / where lies the difference.

And each ‘letter’ sound dances around the chart, depending on the surrounding letters. Speech banana isn’t exactly correct.
That’s actually why people say that they can’t understand women but men can, even though they’re saying the same words. Or it’s different if sound is at the beginning of the sentence / word if spoken after catching breath, or at the end or at the middle. They don’t have same energy. Plus, they/speech are not ‘pure tones’.

I stumbled once upon an article where they give very very detailed information about each spoken sound. I think someone here actually linked that, @jim_lewis or @MDB or someone else who likes digging deeply.

I’m not disputing what you’re saying, but that output calculation looks wrong by a degree.

If you took my example above and just applied the most basic gain rules, the levels are wrong.
Nominally a 65dB SN loss should yield a gain figure around 21-22dB which would give you an 86-87dB output for a 65dB output. Whereas a in 85dB loss would give you a 26-27dB gain which would push the output nearer 91-92dB (for a 65dB input).

I don’t think the article you mentioned was linked by me (or if it was, I don’t remember it!)

Deleted previously written, short circuit on my side, apologies for the confusion.

Thanks so much for all of this feedback:) After living with the changes for a night I am really disappointed in my ability to understand speech. It sounds distorted and was much better with first fit manufacturer settings (which is what my audiologist prefers to use) when I borrowed a pair to trial and loved them. Background sounds are really loud and take over, while speech sounds mumbled and softer.

I think I will have to pay a different audiologist to program. This one is very nice and patient and wants to make it right, but I just don’t think he has the knowledge to help me. For now I’ll just have him put the manufacturer settings back on as they were the best and he’s already tried two REM fittings.

My wife tried and tried with a pair of very nice $6000 aids earlier this year. The audiologist is very nice and continued to adjust with terrible results. My wife finally returned the aids and ended up going to Costco and buying the KS9 aids. She was overwhelmed with how well they helped her hearing at a much less cost.
It might be worth returning the aids and starting fresh with another fitter.
Good luck.

I still contend that HA fitting is as much an art as science. REM is just a starting point. The curves produced by REM are not necessarily how your brain perceives sound. I have never had good success with REM using several different audiologists. The last one in Manhattan, KS was worthless. She matched all of the curves and said it was perfect. After charging me for the adjustment, she charged me again to put the aids back to the original settings. I have one goto audiologist in the country. I go back to Jacksonville, FL when I need aids or adjustments. I am going to try an audiologist in Houston. I hope that is not a wasted appointment.

Have you considered Costco?
They have locations all over.
The Brio 4 might be a good fit for you.

Since I’m in Jacksonville, who do you like here? Like Julie, may Audi believes the manufacturer settings are better, but tried to provide REM testing after a year of my insisting. She was not experienced with it. I’m sure that true of Julie’s Audi too for the same reason. I’ve since read it takes a lot of experience.

If you asked for the 1-4 KHz to be put up by 10-15dB, you’d have a better chance. As long as it doesn’t start causing problems with the feedback manager.

It is actually Michael Knapp with New Way Hearing in Orange Park. I have been seeing him for a number of years. I travel with the government and end up in many different places. He is the only one I have ever found that can adjust my aids for maximum effectiveness.

JulieMK, you will probably not be able to pay an audi who was not the audi you bought the HAs from to program your HAs. Very few audis will agree to program HAs that they did not sell you. Are you still in your trial period? If so, you might want to consider returning the HAs and starting over again with a different
audi.
Hearing such strong language from Um_bongo is unusual in this forum IMHO. I would take that as a significant red flag about your current audi.