I’ve recently changed audiologist but my previous Audi always put a “loop” around my neck when programing a new hearing aid, or reprograming a used aid. This was done (I believe) after a real ear measurement test was done and passed.

Now fast forward to my new Audi and testing a new power aid. There was no loop placed around my neck to program hearing aid. Instead I had some contraption (large display monitor) placed in front on a table as my Audi sat at her PC, 12 - 15 feet away. Well my new Audi attempted to make a few adjustments with HA and then asked “how do you hear me” - which I answered “not well at all”. End result of limited test was I needed an unvented mold to receive full operation use of new aid.

Before I left my Audi office I asked why she placed a such a large display screen in front of me while making hearing aid adjustments. My Audi replied the “unit” placed next to me was for real ear measurement test. Well this was a news to me and I was a little surprised REM tests can vary so much from one Audi to another. Why such a large display screen placed in front of me (no explanation given) and my Audi was not even looking at it. She was on her own personal display screen a good distance away. And as I mentioned my previous Audi never used such equipment to do a REM test.

Anyone know why such a difference in testing a hearing aid.

Several years ago I had the loop around my neck. Never heard it was REM. I’d be interested in the responses here. Maybe a early version of REM. How long has REM been practiced in audiology?

Modern technology. Now he puts a tiny device on his desk near me. Looks like a tiny speaker

Well with my old Audi I think the loop around my neck was a direct connection to my hearing aids to start aid program processing. I’m not sure if it also involved REM. But Has brings up a good point where certain Audi’s replace old testing equipment with new, while maybe other Audi’s might keep old equipment around for years. Maybe it doesn’t make a difference but I find there’s very little discussion/communication between Audi and hearing aid user - how testing equipment interacts with new aids.

My audi has a ton of different wires hanging on his wall for different manufacturers and different aids. I’ve asked him before about that and obviously nothing is universal. But either way it’s not something that concerns me. I mean it’s his job to know which device is needed to program a pair of aids. I ask my audi a thousand questions. He’s the expert. And if he doesn’t know the answer he calls the manufacturer right then while I sit there. Ask your audi

Real ear measurement is done with tubes inside your ear, with HA in place as well.

Tubes could be attached to something like headphones but without speakers on them or some other contraption, but you definitely need to have additional thing in your ear beside HA.

In front of you is speaker from which some crazy words of made up language gets out. Idea is to be able to use it for variety of languages, so it has elements of english, german, I got a feeling of hungarian, I think french, but you can’t recognise word because there isn’t any. Just bunch of vovels and consonants.

It doesn’t need your input at all, but you definitely will hear a bunch of sounds and if possible, see the graphs on the screen going to the direction of special line (your target)

Loop around the neck or little box on the table (noahlink wireless probably) is for connecting with aids.

HA itself cannot do objective/impartial test, because it’s the same device.

Dr cliff aud on Youtube has a video showing one demo of doing REM on a client. I got the same procedure. I didn’t saw any other type that wouldn’t need additional tubes.

Both REM and older wire-programming use wires “on the patient”, and sometimes boxes. A neck loop takes the weight/pull.

I have an old 1-ear REM machine with no neck loop but I think the later 2-ear machine had a loop?

REM is a mike in the ear(s), a sound source, and other stuff to calibrate. The source is usually speaker(s). Mine is one speaker on a tabletop box with teeny monochrome display, but the latest highly-promoted model is a small “PC” with a full display and speakers in the display border. 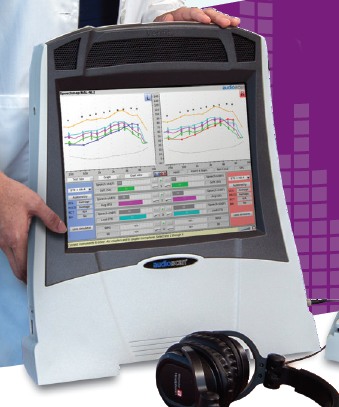 Speakers are above the display, make sounds.

There is a microphone “in” the ear(s). Actually a slim tube because a microphone would block the ear. The ear mike is in the hanging box; also a reference mike to measure the sound around. All this plumbing gets various clips or straps so the patient can’t easily shake it off. 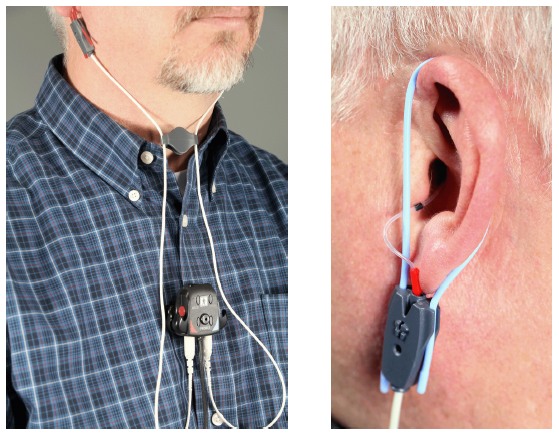 The screen is NOT much use to the client. They say it is, but while I have stared at a lot of audio analysis over the years I could not make sense of it in the few minutes we had my first fitting. My fitter knew what it said and made changes zip-zip. BTW, the display on the REM box can be echoed to the fitter’s PC across the room. Keyboard/mouse can be attached, but usually not for the client. 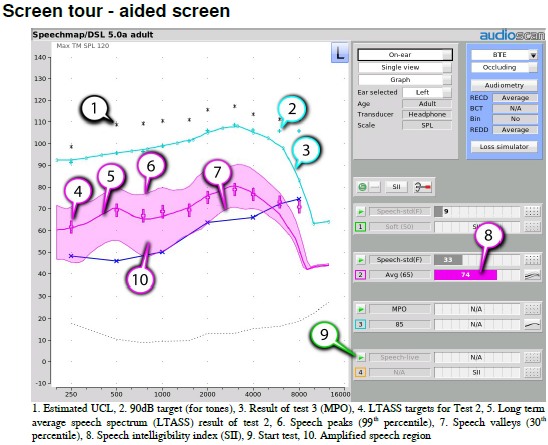 The general goal is to get the in-ear gain response into the pink zone of “normal speech level”.

latest highly-promoted model is a small “PC” with a full display and speakers in the display border.

Great picture attachment PRR. And your first picture (latest highly-promoted model is a small “PC” with a full display and speakers in the display border) sure seems to match what I was sitting in front of when I was testing new aids. Of course there was no explanation given when small PC display was placed in front of me. I’m actually starting to think my new audiologist might have newer programming equipment then my previous Audi, which might or might not make a difference. Thanks for the walk through.

Blackie, I had the REM last week when I got my Resound Preza’s. The language that is used is Dutch. The reason for the Dutch language is because of the tones and so many frequencies. To me it sounded Japanese. I thought it was a pretty language. I am not sure about that REM because there weren’t only two lines. I could see four lines. They were different color and there was also shading between those lines. It didn’t look at all like Cliff Olsons REM.

My phone call with my daughter today was horrible. I had to put the speaker on and that helped a little but most of the time I could not understand her at all. Of course she was also on a cell phone.

I tested the built-in Roger or ‘listen’ program and it worked perfectly. I tested it again last night and it was intermittent. Twice I turned it off but then last night I started getting double sounds and I didn’t know what to do so I looked at my app and it had turned on by itself. Now that has happened twice. But I need to remember that I am still learning and much of this may be my own fault.

I think number of lines shown depends what fitter turns on or off. Basically there’s a bunch of lines possible - you have 3 targets (for soft, normal, loud voice), then you have current output (or 3 if all are turned on), then you might have audiogram (in my case it was gray shade but it wasn’t exactly audiogram but a bit shifted, my fitter and mine guess is that it represents hearable, not barely hearable what audiogram itself is).

I think it’s easier for them to see if they don’t have tons of lines, but some might be well practiced so they don’t mind.

I believe in video it’s shown the least amount, to not confuse us viewers further