Just got a notification through the ReSound Smart 3D app that an important “software” update was available, to remove my LEFT HA and place it near my phone. Turns out to be a firmware update that upgraded the LEFT but not the right HA to 1044.4400 from 1043.4300. The right still remains on .4300. But the Smart 3D app says ALL DONE, success!, put the left HA back in and carry on. Update took about 4 min.

Has anyone gotten this update and had both HA’s updated???

Well I have the app but the aids I’m testing are the Enzo q. Haven’t received any kind of notice. I know this doesn’t help much. Are you noticing any difference between the left and the right aid.?

I haven’t had much of a chance to test the update yet and didn’t want to spend a whole bunch of time figuring out what’s different if both HA’s are really supposed to be updated.

My initial knee-jerk reaction was that’s it’s pretty arrogant of ReSound to offer a self-described important update but not say much about exactly what’s fixed or improved.

The only thing that I’ve noticed so far is that BT connectivity shows up in the Smart 3D app a little faster than it used to but right now I’m not disposed to disconnect and reconnect to see if that’s what’s changed. In another post elsewhere on the forum I complained recently that BT connectivity had deteriorated for me in the last few months, which I ascribed to Samsung security updates for no particularly good reason other than correlation. It would be great if the update improves my BT connectivity but I’m looking forward to hearing from anyone else on whether just one or both their Quattro’s are updated when the firmware rolls out to them.

Is it possible that the aids communicate with each other and the firmware update serves both aids from just the left aid?

More and more I see this generic non-informative update information, from Google, Apple and many others on phones and computers.

Gee, thanks a bunch.

That or the master hearing aid was updated and the slave one is ok with what it has now. (?) Just a WAG.

I ve been having blue tooth and app pairing problems to the point that I would uninstall and reinstall the app. So who knows. Maybe I got the update and didn’t realize it. Pairing does seem to be working better lately after a lot of aggravation. My experience with most aid manufacturers is they pretty much do whatever they feel Ike. They all make these claims that their aids are the best for everyone. But then when you try them each aid for the same hearing loss sounds completely different. The only thing consistent is the thousands of dollars they charge

First it took me through the left aid. Then the message popped up that “left hearing aid is now updated. Ready to install on right hearing aid.” It didn’t tell me to take the right one out, though, it just started installing when I hit “install.” So I took it out and put the right one near the phone. The fastest internet download speed I can get is 25 MBs. It took 3-4 minutes to download for each aid. Then the message came up that it was rebooting the right hearing aid. And then the installation successful message came up. I didn’t have to re-pair the aids to my Iphone.

Our thorough investigation confirmed there are no issues with the battery or the portable charger, but that the charging algorithm in the hearing aids may be prematurely stopping the charging process in those limited instances.

To address the issue, beginning today, a Remote Hearing Aid Update will roll out to ReSound LiNX Quattro rechargeable hearing aid users to optimize the charging algorithm to ensure the batteries are fully charged.

ReSound LiNX Quattro rechargeable hearing aid users will receive a notification in the ReSound Smart 3D app when the update is available to them.

finished updating my quattros a little while ago with no problems

as far as battery life I’ve had no problems… had HA’s for over 1 1/2 years still have about 60% chg. left after wearing them about 15 hrs a day and many days especially with the pandemic I’ve been streaming TV for 10 to 12 hrs a day

by far the best battery life and charging system around

by far the best battery life and charging system around

“That’s might bold talk for a one eyed fat man”

hey… I might be fat and I can’t hear but I have both eyes and can see a fly on a fence post at a 100yds.

BTW do you know of another HA that can do better because I’ve tried other models and no one has come close ??

I was just having some fun. Thought you might get a laugh out of it.

I will think about your question concerning hearing aids.

That’s pretty good.
I have a neighbor who can hear a mouse fart at a hundred yards. I am definitely jealous!

“That’s might bold talk for a one eyed fat man”

I might be one of the few that recognizes where that line comes from! One of my favorite movies of all time. BTW, for anyone who likes Wayne movies, I recommend The Shootist and The Searchers, too. For a guy that was supposedly a reflexive conservative, he made some amazing soul-searching socially conscious movies, particularly some of the themes in The Searchers, where his lead character has possibly had an affair with his brother’s wife and wants to kill his possible daughter from that implied relationship, who was kidnapped as a child and become an Indian squaw.

My favorite line in the movie about the one-eyed fat man, though, is perhaps when Rooster, who had scoffed at La Boeuf (Glenn Campbell) as a Texas Ranger, finally pays tribute to him, “He saved my life twice. Once when he was alive, once when he was dead.” And. after a lot of boozin’, we really see True Grit not only in the meadow but when he races to save Mattie’s life.

Edit_Update: Forgot to include a link to the story of The Greatest American Novelist You Never Heard About: 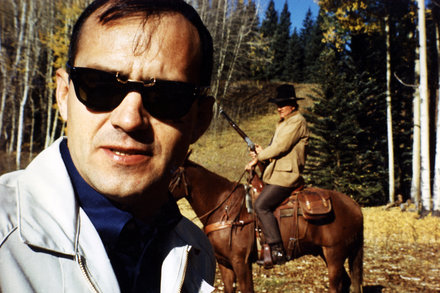 Thanks for all the info from everyone. In the past I’ve had problems with one hearing aid not being duly registered with ReSound for Remote Assist and that caused a firmware update for that HA not to be completed but then, probably with an earlier version of the Smart 3D app, the app would repeatedly try to update the problematic HA but fail shortly after initialization.

It could be in my case with only one ear being updated that there is some hardware/firmware difference between ears. The left HA is a replacement HA from August 2019 or so and it has always had its battery appear to run down faster than the right, which is still my original issue HA from October, 2018. So perhaps as Rasmus points out, if the firmware update addresses battery charging issues, there might be a reason in my case to only update the left as it is only that aid of my pair that I’ve noticed “it doesn’t hold a charge as well as the right.” If I’m having some problem with the right aid being duly registered and recognized by ReSound over the Internet, I doubt that my audi will want to see me now just to fix me up in that regard.

OT: My grandson and I used to enjoy putting some peanut butter or something on a target to attack a fly and then shoot them at 50 yds with a .22. Never tried 100 yds; but we could do it consistently at 50 yds.

So now I have a completely dead “bricked” left hearing aid!!!
Thanks Resound!!!

So with the current “Lockdown” scenario here in Australia how the hell am I supposed to get this resolved?

I have emailed Resound “Support” (Term used with poetic licence) and will wait to hear what they suggest how THEY are going to remedy the problem THEY have created. Sheesh

Hey don’t stress, it won’t be hard bricked, the thing is to always start with a fresh battery.
So what you can try is to uninstall the app from your phone and reinstall it, next put a fresh battery in and try to reconnect to the app.

Also what is the exact model you have?