LE Audio and the Future of Hearing

Perhaps it’s part of Apple just keeping developers locked out of core hardware features. In Android, developers have access to stuff like battery temperature. In iOS they don’t. I’ve requested several battery features for iOS battery manager apps and, IIRC, the usual developer reply is that Apple doesn’t let us access that parameter…

With a Galaxy Note 8 running Android 9, I get the Yes’s in green, the No’s in red. Maybe it’s one of those things that’s affected by Android OEM customization?

@tenkan :You probably just need to reduce the font size in your phone’s general settings for display.
I get this with my Samsung S22: 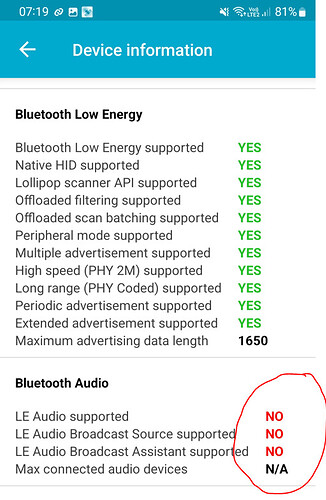 If I change to a larger font in the settings the YES/NO are not visible anymore: 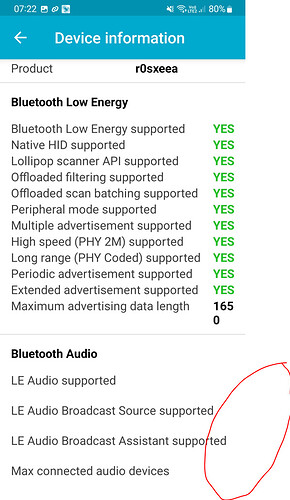 Ok so I couldn’t find any settings that changed the font size in the App, but I just fipped my phone to landscape from portrait and it shows as it should, a red “no”

Yes, the app has no such setting. I did change in the general settings of the phone.
Anyway, the app provides correct info now

I think the way it works is that Apple provides software development kits for upcoming models, under NDA

Doesn’t sound like Oticon got a pre-release iPhone 14 and iOS 16 BETA under NDA with a software development kit:

I have a new service message in Oticon On app. What is those “groundbreaking new innovations” described in this message? P.S. I use a pair of Oticon Xceed 1 SP with iOS 16 beta - without any changes and/or issues. [image]

Doesn’t sound like Oticon got a pre-release iPhone 14 and iOS 16 BETA under NDA with a software development kit:

More fool Oticon then. I suspect their software development team is quite small, or even entirely outsourced.

I am pretty sure that the apps are out sourced, but I have met and talked to a couple of the audiologist/ developers of the firmware for the aids and they are definitely Oticon employees. I have told the Oticon VA rep that the ON app doesn’t live up to the Oticon standards. And she agreed.

Reading the comments in the Mac Rumors article that I linked to above is very interesting.

The commenters ask why Apple is not making a big deal out of BT LE Audio capability in their new AirPods Pro 2 devices.

The answer is (according to the comments) that with an iPhone and the AirPods Pro 2, the Apple AAC codec is superior in audio quality to the LC3 codec in BT LE Audio. One poster says the only benefit to employing the LC3 codec in Apple devices is that it’s better in dealing with “complexity” in the BT stream and better for battery life.

Another poster says that the LC3 codec does bring better audio quality to Android phone users equipping themselves with Apple’s AirPod 2 Pro devices as their earbuds of choice. According to the comments, the reason Apple is not trumpeting BT LE Audio is they don’t want to advertise “Now you can use our earbuds with an Android phone and get GREAT audio!” Apple wants to sell iPhones and iPhones will do fine with the AAC codec until there are more mainstream uses of BT LE Audio.

Me: But what about HA’s??? iPhone to (name your favorite) MFi HA?

Edit_Update: A survey comparing Apple AAC vs. Android AAC vs. LC3Plus (some commenters on the article below say it was unfair to only make the comparison at 144 kbps).

I think the last answer might be the best. Apple is doing just fine as it is. People are falling over themselves to get the Airpod Pro Gen 2. Not even a mention of LE Audio. They’ve probably got the upgrade ready to go for when Marketing says the time is right.

A survey comparing Apple AAC vs. Android AAC vs. LC3Plus

Interesting. Bluetooth SIG have LC3 at about 4.3 on the same scale at a slightly higher bit-rate. Cherry picking samples or something else? I don’t think LC3 was developed as a codec for audiophiles but you’d still want it to be reasonably close to AAC.

I have a galaxy S22 and Oticon More1 aids!
I’m curious what advantages I might gain by installing NRF connect? Hands free phone functionality?

I was looking at the pixel 7 bluetooth spec yesterday and notice that It has 5.3 Le and my phonak paradise nadia UP only have 4.2 dual mode. I take it that the 5.3 Le would not be an improvement for my paradise Ha. Am I right? I also notice that the 5.3 is just a refresh of the 5.0.

No improvement for the Phonak line of things, they seem stuck on 4.2 classic/LE for now, possibly in a new platform coming, otherwise they’ll be left behind in this area.
LE Audio is the new industry standard starting with 5.3 LE, so this is more then just a “refresh” of 5.0.

I’m just back from a trip and kind of fried, but if I understand your question correctly, the only benefit of installing NRF Connect is to check Bluetooth compatibility of your phone (and if you’re a developer have access to a lot of info I don’t understand) There is no advantage for day to day functionality of hearing aids and phone.

Where did you find where it says Pixel 7 suppports BT 5.3 and LE Audio? I would expect it, but the only things I see say 5.2

Yes that is all I’m seeing today is the 5.2 LE audio with most of the Google searches on the pixel 7. Must have been an illusion or a senior moment. But the specs is saying 5.2 LE. Sorry for the misunderstanding. Am I understanding the LE is not on the 5.2?

LE is just low energy bluetooth, which pretty much all bluetooth has back to at least 4.2. LE Audio is different than LE. LE Audio uses the LE signal (which was designed for data, not audio) for good quality audio. Apple has their own flavor of LE that works with audio, as does Android with ASHA. LE Audio offers the hope of universal compatibility, as well as broadcast features present in Auracast. It is very easy to get confused by the terminology.