Fitting comparison for KS9 and Jabra Enhance (Resound One)

I’m an experienced HA user (10 years or so) with flattish (maybe mildly reverse-slope) progressive hearing loss (diagnosis was cochlear Meniere’s disease). I’ve worn KS9s (with power domes) for the past two years and went in three weeks ago for a new audiogram and to check out the KS10s and Jabra Enhance devices. I’ve been trialing the Jabras (with MRIE receivers and power domes) since then and occasionally switching back to the KS9s for comparison purposes. Also, while I was there, the HA fitter updated the programming on the KS9s to reflect the new audiogram. So, even the KS9s seem “louder”
than they did before. The fitter performed REM on the new Jabras and seemed to be doing quite a bit of adjusting of gain. No REM this time on the KS9s; he (same fitter) did that two years ago.

SO - immediate reaction to the Jabras: Voices seem shrill/tinny/harsh, almost to the point of making the speaker’s identity unrecognizable. Same with streaming. Audiobook “reader” was hard to recognize. Music is shrill. What I think of as “impulse” sounds seem startlingly loud (crackling of a candy wrapper; running over an acorn on my bike sounds like a gunshot), but maybe that’s the result of the updated audiogram. Went to a concert and thought “wow, this sound system sucks”. Switched out the Jabras for the KS9s and realized the sound system was fine. At a restaurant, the Jabra Restaurant program amplified the voices, but the harshness was hard to tolerate. On the other hand, noise reduction seems more effective, and they do seem to be better at handling reverberant rooms (which were a real problem for me with the KS9s). With the Jabras, I hear less of the soft ambient sounds (refrigerator running) than I do with the KS9s.

Anyway, I go back to Costco tomorrow for adjustments on the Jabras. I’ve been curious to understand how these two sets of devices, using the same audiogram, could sound so different. I bought a Noahlink off of ebay and (thanks to the generous assistance of forum participants) installed Target and Resound Smart Fit so I could look at the programming of the two sets of devices. It’s been really helpful to be able to be able to compare, rather than just read descriptions of the tools, but I’m very much a newbie in understanding what’s on the screen.

I’d appreciate any comments or suggestions.

First, here’s a screenshot of Target for the KS9s. Fitting formula was apparently NAL-NL2. The gain settings generally follow the contours of the fitting curve (boosted somewhat), except for the high frequencies of the left ear, where it seems (?) that gain is restricted below the fitting curve in order to avoid feedback. Sound in my left ear has always seemed “dull” compared to my right, and this could explain why. Wouldn’t this suggest I should have a mold rather than domes for the left ear? Both ears, actually? 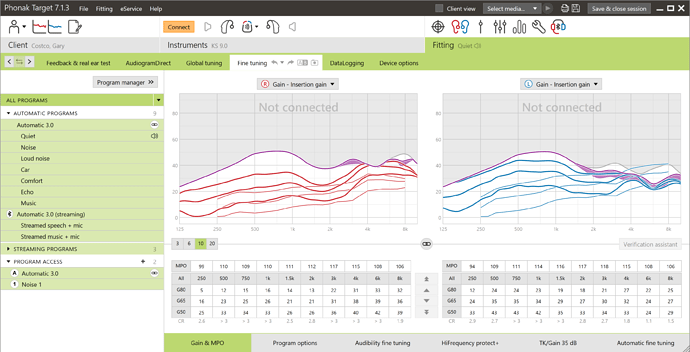 Here’s a screenshot from Target’s Output view. Fitting formula is Audiogram+. Seems like output is fairly flat (right ear) from about 500 to 2500 Hz, and there’s a +10 db bump at 4K Hz. Outputs seem well below MPO for the receivers. 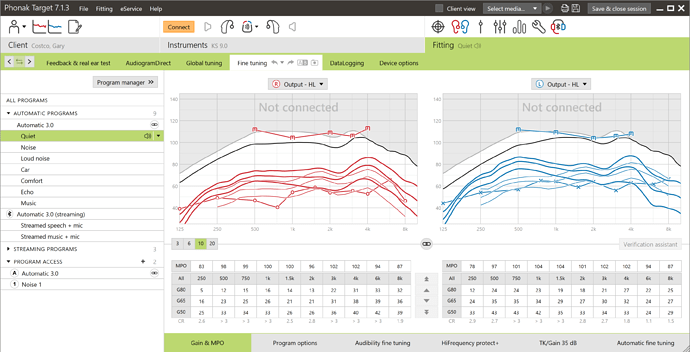 Here’s a screenshot from Smart Fit for the Jabras. One thing I notice is the “bump” of 10-15 db is from 2K to 4K Hz, and then output drops by 11 db at 1.5KHz, and declines further below that. Seems like this might explain why voices sound so different between the two aids. ? Also, the Jabra output gets much closer to MPO than did the KS9s. In the Restaurant program, it gets within 2 db. Could I be getting clipping/distortion in loud environments? 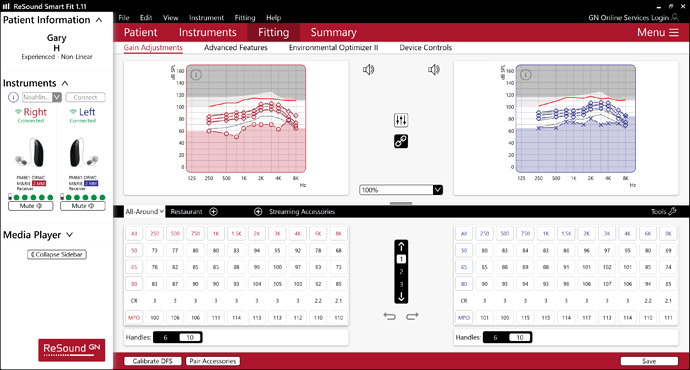 I’m very interested to see what changes the fitter makes based on feedback. I’m also going to demo the KS10s in two weeks.

(interesting observation about the KS9s and Jabras wrt bluetooth. My pixel 4a can pair with both simultaneously! I guess the KS9s use classic bluetooth, and the Jabras use bluetooth LE. Useful for fast switching between devices for a-b testing.)

@garyh to verify, were you able to use Smart Fit and make adjustments to the Costco Jabra hearing aid? I have read that Costco’s were locked from being able to DIY but also ready about the possibility that the Enhance Pros would not be locked.

Yes, I had no problems using Smart Fit to adjust the Costco Jabras (which I have since returned). The Jabras are not listed among all the ReSound devices that Smart Fit shows. However, the Jabras connect successfully using Noahlink, and Smart Fit gives a message saying that they can be programmed. So, as far as I could tell, the full array of features and controls for the ReSound Ones are there for the Jabras.

@garyh I am using Smart Fit 1.11 and when I search it says “No Instruments Discovered.”

Any ideas? This is my first time using SmartFit but I didn’t have any trouble connecting to my other pair of aids. Bluetooth is off and I just now replaced the batteries.

Has anyone else been able or unable to adjust their Costco Jabra’s with Smart Fit?

Can you give more details about how you are trying to connect, can you post some screenshots?

Are you sure you have the HAs in pairing mode so the Noahlink can find them?

You shouldn’t have any issues connecting, something’s not quite right in the procedure that your doing.

@tenkan I have Windows 10, Smart Fit 1.11, and Noahlink Wireless. With both my Resounds and Jabras I have just been wearing them and sitting about 24" from the Noahlink Wireless. Below are the three clicks I make. On the first image I click “connect” in the top right. Which takes me to the next screen/screenshot where there is a little spinny thing in the top right next to the word “Search.” Then after a few seconds, I see the third screen/screenshot with the warning.

I have Bluetooth turned off and the batteries were brand new when I started this morning. 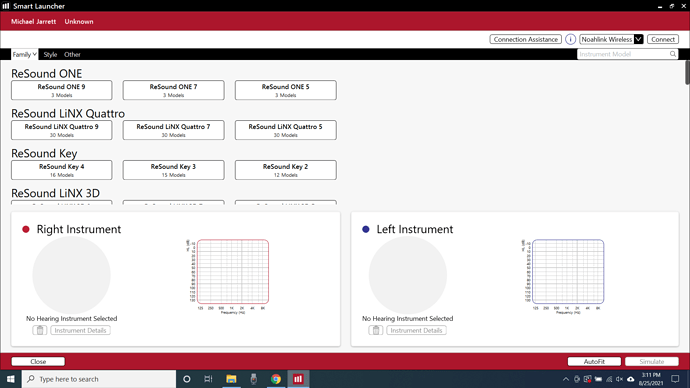 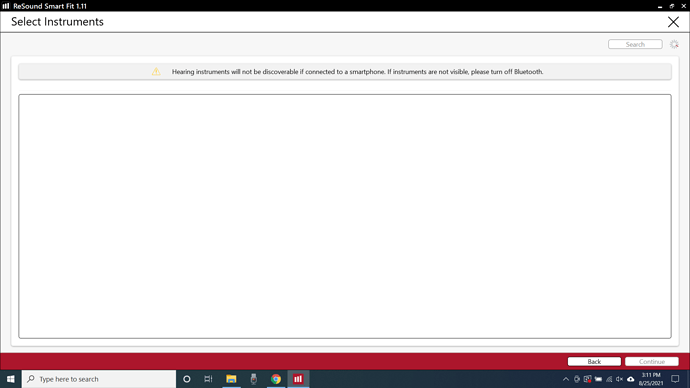 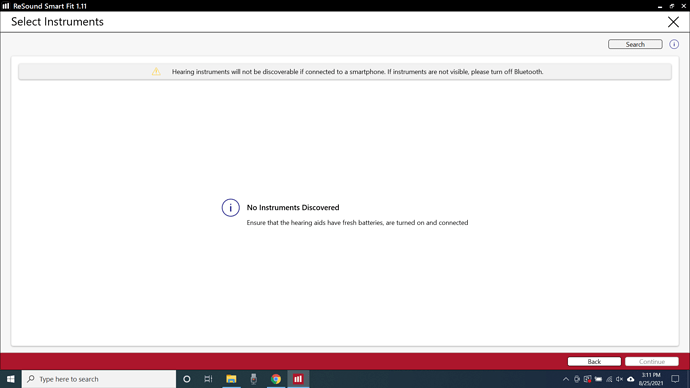 Did you turn the aids off and then back on right before trying to connect? 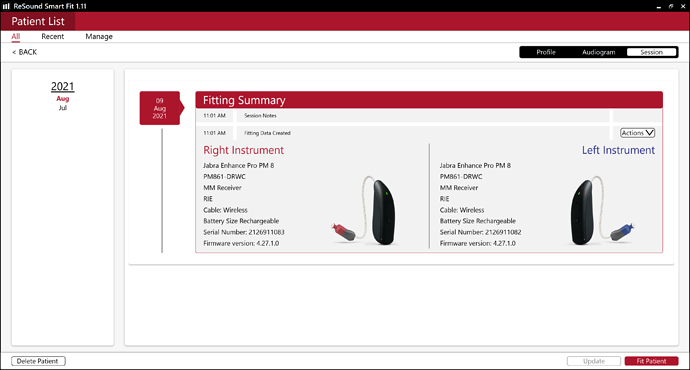 That did it! @garyh. Thank you. @tenkan I guess that is what you meant by “pairing mode.” Thanks for y’alls help getting connected.

I notice that there is no setting for “Wind Guard” as there was on the other aids. Is this just handled as noise now? Or is there something else going on?

Also (sorry for all the “newbie” questions) - if I go to save a change, it asks me to log in and warns that if i skip logging in then I will not be able to do remote fittings. Is this as scary as it seems to a new guy - in other words, once I start, I’m on my own. Costco will wash their hands of ever working with me again?

Yeah, I remember the anxiety that produced in me. As best I can recall, you can save the Costco original settings to one session, and then create a new session where you make your changes, which you can save to the hearing aids and/or the PC. ReSound also has a “save to cloud” option (which requires a login) I ended up assuming that as long as I could restore the Jabras to the fitting that Costco made originally, then all would be OK. I’m now working with the KS10s, and they don’t offer that remote fitting warning. So, remote fitting would involve what Costco has in their database vs whatever I put in the aids themselves. No cloud involved, as far as I know.

As best I can recall, you can save the Costco original settings to one session, and then create a new session where you make your changes, which you can save to the hearing aids and/or the PC. ReSound also has a “save to cloud” option (which requires a login) I ended up assuming that as long as I could restore the Jabras to the fitting that Costco made originally, then all would be OK

Careful with this. I have Resound Quattro’s, with a local Audi and when I save my fitting into the aids I no longer have the ability to use their remote fitting. Even if I restore from their original fitting that I’ve saved. You can tell by the function to request remote assistance no longer shows up in the app.

However, you can go back to Audi/Costco and they can update your aids.

I’m probably getting the Jabra’s soon, and am thinking I may not do my own programming on them, mainly. Due to my Costco being a hour and a half away.

and when I save my fitting into the aids I no longer have the ability to use their remote fitting.

Why not, you must enable this in the fitting for it to work, so you could do this while you are programming them, right?

However, you can go back to Audi/Costco and they can update your aids.

What do they update? Can’t you do this yourself when you have SmartFit.

Maybe I’m not doing something I could be?

What do they update? Can’t you do this yourself when you have SmartFit.

Missed this in my reply above. I believe they can do it because they actually log into the resound / smartfit cloud…. And as a non professional I can’t.

I had the experience above of everything sounding tinny and harsh with Jabra M&RIE on the All Around program but not the Restaurant program. I went back to the audiologist today. She changed a setting in the All Around program from Omnidirectional to M&RIE. I don’t know why this wasn’t the selection in the first place. It made a huge difference. The sound is much improved. Not tinny or harsh.

I’ve updated to smart fit 1.12 yesterday. Not much seems to have changed. I agree with Saber - I changed to m&rie because I wanted to have wind noise blocking in the all around (which the other doesn’t have). There are quite a few features in there I need to spend some time with.

Where do you download the smart fit from and how do I know which version?
I have the Jabra Pros from Costco.
Too new to be tweaking on my own, but would like that option as I get more experience.
Thx !

@texxasguy when you install the software my suggestion is to create two patients. I made one and called it costco copy. I uploaded the config from the HA, saved and exited. Now I have the default. Then I created another to make changes.