Are Roger Pen 1.1 or Roger Pen iN compatible with Audeo P90 RT hearing aids? Perhaps with a My Link?

I’m looking for an external microphone that will connect to my iPhone and computer so that people can hear me better than the built-in microphones on the P90 RTs while on phone calls ans Zoom meetings. The direct Bluetooth connection between my P90 RT and iPhone is not as stable as the Bluetooth on my old Compilot II that I used with my old hearing aids, so I’m basically looking to recreate that experience with my P90 RT hearing aids.

No you can’t use Bluetooth with the Pen 1.1. That is why the Pen iN doesn’t contain Bluetooth.

If you turn Bluetooth on, on the Pen (if you have 1.1) then it makes the Marvel and Paradise aids go crazy and stop working properly.

If you do get the Pen iN, then you won’t need a myLink.

Can Roger Pen iN make phone calls via audio cable as shown here? 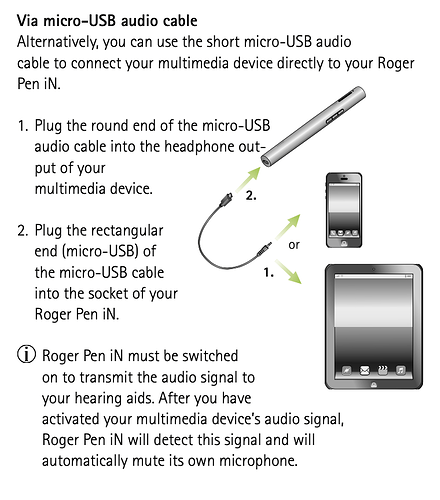 Otherwise maybe a telecoil device is my best bet to improve the sound quality of my voice to others during phone calls (maybe a Roger My Link?). Sounds like there are not going to be be any options to connect the Paradise P90s to a smartphone.

Your picture is talking about the Pen iN so I assume you can make phone calls that way.

If you get the Pen iN then why do you need a myLink? The iN device has Roger licenses installed in to the Pen to transfer to your Paradise aids.

I’m really skeptical of being able to use any microphone other than the hearing aid’s microphone unless you disable bluetooth (and hence disable streaming to your hearing aids) I’d verify that what you propose will work before spending money, or make sure you have a money back guarantee.

Yeah I’m worried the iN isn’t going to be able to make phone calls, too.

All I really want is a ComPilot replacement device:

I can’t tell if any of the Roger products do this for the Paradise P90 RTs!

Looks like @MDB is correct: Roger Pen iN cannot make phone calls. The Phonak Professional support page lists phone calls with an asterisk that then reads “*Not applicable for Roger Pen iN and Roger EasyPen.”

Maybe the Roger Neckloop could be used with a Roger Pen 1.1 connected via bluetooth? I’ve messaged Phonak directly. I’ll experiment with holding the iPhone up closer to hopefully activate the telecoil feature.

Maybe the Roger Neckloop could be used with a Roger Pen 1.1 connected via bluetooth?

You won’t be able to use the Bluetooth on the Pen 1.1. The myLink links to the Pen via the 2.4ghz frequency. It doesn’t link via Bluetooth.

Pretty sure phone could be handled by connecting to phone with hearing aids T-coil and using phone’s microphone.
For laptop, wonder if you could stream to hearing aids just as a headset and use a wired in microphone?
Perhaps work with Apple tech support to see what they think. I don’t think a Roger device really gets you anything for this use case.

I think I was confused because I thought the inductive loop was basically the same as a telecoil. But the above seems ridiculous so I think I’ll pursue a different solution. Thanks!

Great suggestion @MDB. I’ll experiment with t-coil built into the iPhone and see how it goes.

For Zoom, etc. on the computer, that’s exactly what I’ve been doing. The Bluetooth connection isn’t as stable and reliable as I’d like but when it finally connects, I can usually find a way to select a separate mic input and use an external mic.

This wouldn’t work as it’ll make your aids go crazy and stop working properly. There’s no way to use the Bluetooth on the Pen 1.1 with Marvel and Paradise aids. 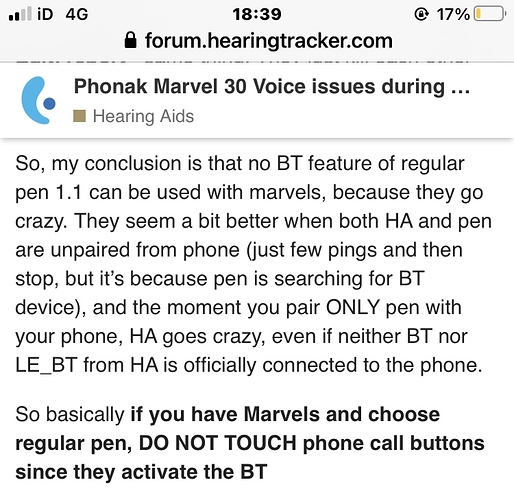