First time posting here, so hello everyone, and I’d be grateful for some help because I’m not getting very far with my audiologists. I have a pair of Widex Dream FS-440 BTE hearing aids, fitted in Canada in 2013. I’m now back in my home country of the UK, the hearing aids are no longer working, but I liked the sound quality and I have some expensive accessories for them so I’d like to repair them if possible. This model has been discontinued, I can’t take them back to the audiologist who originally supplied them because he’s 4,000 miles away and isn’t answering my emails, my UK audiologist isn’t interested either, so if I want to repair them I will have to order the spare parts and do it myself.

There are two problems I need to fix in order to get them working. The ear wire on the left aid is broken. Also, the ear moulds have become more loose fitting, probably because my ear canals have changed shape a bit in the last 7 years, so. So I would like to buy new ear wires and receivers for both the left and right aids, but with flexible domes rather than the rigid moulds which were originally supplied.

I have found a spare parts supplier in the UK (Connevans) but they have flagged up two problems before I order the parts from them. Firstly, they want to know whether I want S, M or P type receivers, they say this specification should be stamped on the side of my existing receivers, but it’s not: what my receivers have stamped on them is 260L and 851R, and they don’t understand what that means. Is this a difference between Canadian and UK terminology and can anyone help me translate?

Secondly, they say the aids may need to be reprogrammed to use domes as they were originally set up to use earmoulds. Does anyone know how important this is really, because it’s unlikely I will be able to find an audiologist willing to do the reprogramming? Will the aids probably work reasonably well if I just swap the earmoulds for the domes?

Thanks for any help/thoughts, and I’m attaching a photo of the aids. 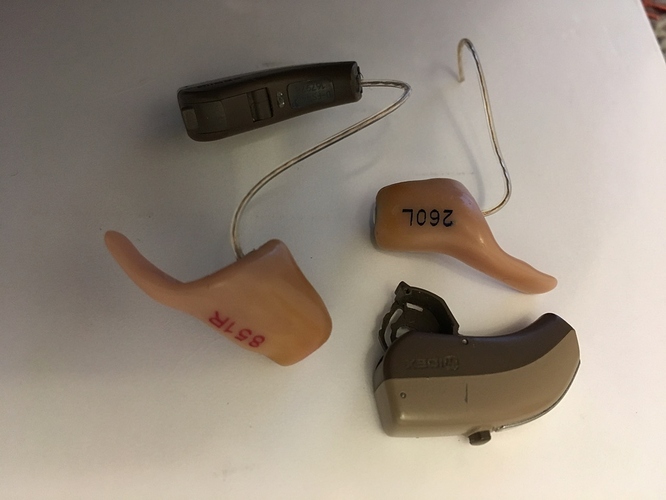 Widex will still repair dreams. I have spare Minds which are 12 years old and they are only just stopping repairs on those. My son has dreams as spares. Do you have a bloom Hearing nearby? Or Amplifon should be able to send them back for repairs, fee should be £100 per aid. Your current audiologist may just have stopped doing Widex, I don’t think they are supplied through Boots or Specsavers at the moment so look for Widex dispenser.

And yes you need to get them reprogrammed with different tips-feedback calibration and sensogram will do this automatically for you, the dispenser can do this easily but make sure you insist on it.

I’ve used these people. They are great!

I’ve also used these people for ear moulds. They make ear moulds from old ear moulds and bulk them out.

what my receivers have stamped on them is 260L and 851R

That’s not the receivers; that’s the ear-molds. Some job-number to keep the molds, invoice, and customer all together.

In these HAs the receiver is INSIDE the ear-mold. Does it come out? I have never handled this type and have no idea. I hope someone here does.

Well-fit ear-molds leak sound a little. Domes leak sound more (usually; at least differently). This affects both bass and the high frequencies. For my loss, the bass is moot but an ear-mold would give a little more gain before feedback above 2kHz (where I need it). You also have 7 years of ear-change, which for me is significant (5-15dB changes in 7 years). So yes you sure do need re-testing and fitting.

Thanks for all those suggestions everyone, that was very helpful. Sounds like the bottom line is, I really will have to find an audiologist to help me with this, so I’ll get working on it. Paul, it looks as though if I pull hard enough on the ear wire attached to the ear mould, the receiver might come out with the wire attached, but as I am a little faint hearted and not wanting to wreck the aids any more than they are already wrecked, I think I’ll resist the urge to try it.

If you can get the receiver out of the one that’s already broken you will learn if it’s replaceable and what it is, power and length. Then you can buy a new one.
Have you figured out how to open the aid casing where the receiver wire hooks up?
As Zebras said, you can get new ear molds made without an audiologist.
No reason you can’t get new molds and receivers the way I see it.

I tried it, got part way there but it looks like you need a special tool to push the receiver all the way out. I will try to make myself a suitable tool and let you know how I get on!

The latest in my hearing aid saga: I have now managed to break down the faulty hearing aid receiver/ear tip assembly as shown in the photo. From left to right: 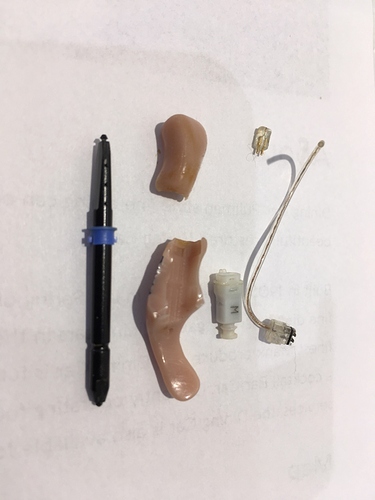 You are doing good.
Are you planning to get ear mold impressions done yourself? This is what I did here in the states with Lloyd’s Hearing Aids. They mailed materials to me to make impressions. I mailed them back with new receivers and they had molds made. A few weeks later the new molds with the receivers arrived. These are soft silicone molds.

Yes, I’ll probably give that a try, but what are the pros and cons of rigid moulds (like the ones I had) vs soft silicone moulds?