I’m trying to work out what the difference is between the first generation Roger Pen and the Roger Pen 1.1?

I’ve tried googling but nothing is coming up.

All those versions got me boggled, too.

I’ve got an Roger Easy Pen, which doesn’t allow for manual switching of microphone mode: The position of the pen determines the mode. And I’ve got a Roger Pen v1.1, which allows for automatic(pen position) and the three manual modes. (Never been able to get the point-the-microphone-to-a-person-20m-away mode working.) Don’t see any more options in Phonak Target Session>Instruments>accesories, too. So Could it be that the Roger v1 is the same as the Roger Easy?

Still, I also have a Roger X(03) and it is not in Phonak Target. When I choose the Roger X(02) and type the serial number into the box, choose device options to jump to another page and push the Warranty button, it can’t find the RogerX(03). It can find all the other devices even though some are out of warranty. No option to choose the less expensive Roger X (03). So Phonak Target isn’t as complete as I would like.

What is clear, though, that there is a question of compatibility. The audio boots that connect directly to the Pen, the Roger 10-19 are only compatible with specific hearing aids. For my Phonak Bolero B90 SP, I can only choose the Roger 18(02).

Have you got the receivers already? Look on eBay if you haven’t. That’s where I bought mine from for $99 each.

I’ve solved my problem I was having with my EasyPen so don’t need to look for another transmitter. I thought for a few days that my EasyPen was broken.

I don’t know whether I am going to need them with my new aids, but I got a prescription for them, so I can get them for free. 99€ Does seem a lot more reasonable than what they’ll be charging the insurance, though!

However, I can connect the Roger Pen v1.1 with the Roger X to the Compilot or to the Roger Mylink. So won’t go bothering them again until it is really needed.

I had a problem with the Roger V1.1 not wanting to charge anymore. After quiet desperation and a few months the thing will charge again. Odd, since the full reset didn’t do anything. Apparently, the whole device had to thoroughly shut down, before it wanted to charge again. Very odd. Problem with the Easy is that I can’t seem to find it

Even more odd, but I have children and they do have a habit of making things appear at odd places.

What was wrong with yours?

I had a problem with the Roger V1.1 not wanting to charge anymore. After quiet desperation and a few months the thing will charge again. Odd, since the full reset didn’t do anything. Apparently, the whole device had to thoroughly shut down, before it wanted to charge again. Very odd. Problem with the Easy is that I can’t seem to find it

Even more odd, but I have children and they do have a habit of making things appear at odd places.

Mine wouldn’t charge either, then I couldn’t turn it off. Got it working, thankfully. Think a firmware update sorted that out.

Can’t seem to get the firmware updated with those Roger Pens. Any idea how I can get the Roger Updater to detect the Roger Pen?

Download the Phonak Roger Upgrader Software and plug your Pen into one of the USB slots on your computer and then you’ll be able to update it.

The software is free from the Phonak webpage.

I have done that. The software won’t recognize the pen. I feel like I am missing something obvious.

Oh how weird. Is your Pen the first generation as I think they don’t read earlier Pens, only the 1.1.

It says Roger Pen 1.1 on the bottom above the serial code.

Give Paul Harris an email. He is a Roger / FM fairy as he’s known here in the UK. He goes round schools issuing the Roger System so he’s very knowledgable. 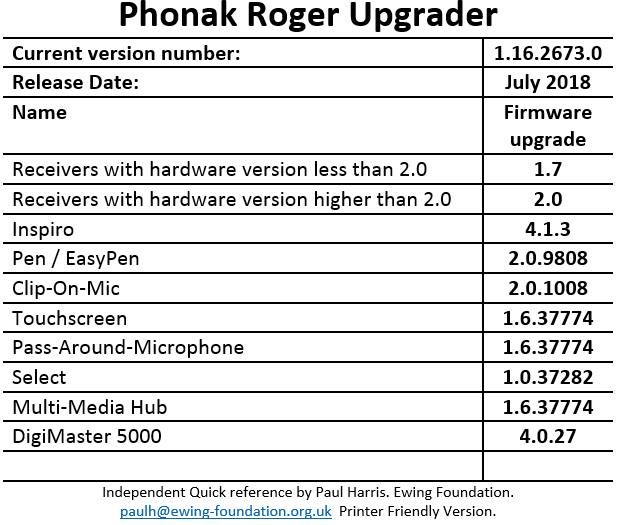 Are you able to read the Pen to see what firmware your Pen already has?

No.
Windows 10 only recognizes the RogerPen. Leaves it at that, too. No info whatsover on the Pen in windows. Everything in Roger Updater 1.16 demands that the Pen is detected first. And that screen seems stuck.

I don’t have Windows 10 and I can use the software.

Doesn’t work in win8 compatibility mode nor with administrator permissions. I think I’ll have to give up on this.

MARKISMUS - Before giving up completely, have you tried using a different data cable? Some Roger Clip-on Mic’s come with a charging cable only
USB A to USB Micro Charging Cable (no data - charging only).
I realize that you’re asking about Roger Pen 1.1, but it might just be that the cable you are using is not allowing data to be transmitted and therefore cannot be read by the software.

ZEBRAS - to respond to the initial question about the difference between the original Roger Pen and Roger Pen 1.1, I recommend calling Phonak Customer Service and asking (US # 800-777-7333 - check the Phonak website for your local number). I called a while ago and asked about the difference between Clip-on mic original vs 1.1 and was told that the microphone technology was the same, but the buttons on the 1.1 were more robust. If anyone knows differently, please post with additional information.

What’s the difference between the Roger Pen and the RemoteMic other than size?

This is a simple question with a complex answer - sorry for the lengthy reply.

Please note that there is a difference between Phonak RemoteMic and Roger Clip-on Mic, which is explained further below.

The short answer to your question is: the difference between Roger Pen, Phonak RemoteMic and Roger Clip-on Mic is the microphone pick-up patterns.

The Phonak RemoteMic uses a bluetooth connection to a ComPilot or other bluetooth receiver connected to hearing aids, and has a non-focused (omni-directional) microphone pick-up pattern. I find this useless in noisy environments like a restaurant because it just amplifies everything. I ended up using it only to set in front of a TV so that I didn’t have to turn the volume up too loud. This cannot be ‘paired’ with additional microphones, so cannot be used to create a multi-talker network array.

The Roger Clip-on Mic can connect to a Roger Receiver and/or be used as part of a microphone array or multi-talker network by connecting to a Roger Pen, Table Mic or other Clip-on Mics. The Clip-on Mic has a similar focused microphone pattern as the Roger Pen in lanyard mode. A very focused pick-up pattern which is better for noisy environments if you are trying to hear one person. The Clip-on mic should be no more than 20cm/8in from the speaker’s mouth. So in use, when I’m having dinner with someone, they clip the Clip-on Mic to their shirt/blouse and I can hear them very well. If having dinner with several people, I use the Roger Pen as the primary device and create a microphone array, some people wear the Roger Pen, others wear Clip-on Mics, and I can hear whomever talks first, until they stop and the next person starts talking. It’s not perfect, but much better (for me) than not using multiple microphones.

If you’re not tired of reading yet, see this link for even more details of the Roger system and uses. Scroll past the pictures of hearing aids to the What is Roger? section for a general explanation and a diagram of Roger Pen’s 3 microphone patterns.
Scroll to the Compatibility between Microphones section for explanations of multi-talker networks. 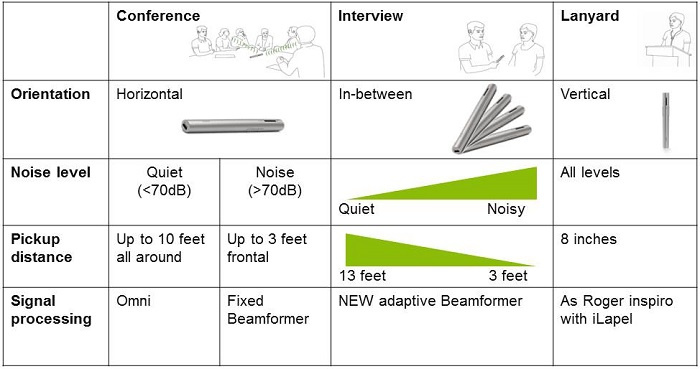 I’m finding this conversation interesting. If you guys can’t work out the difference then I have no hope in hell. I’m about to invest in a Roger pen, as my hearing test has gone down again. Only 5 dB right across the board though, but that 5db makes a difference. I’m also looking at the price of the Roger Pen here in Aus $980.00

. Can I ask where you guys purchased your Roger Pen please? Do you have a link? TIA