I recently bought a Phonak Roger mic 1.1 on eBay.

When it arrived, it was DOA. I contacted the seller and they sent me another one and said not to bother sending back the first one. Second one works great.

I bought it to replace my Phonak Roger Mic 1.0 which works but I wanted an upgrade due to poor bluetooth quality IMHO.

Now you know why I have 3 Roger mics.

Anyhow, I got curious so I took apart the working Roger Mic 1.0 (using a couple of plastic cell phone repair tools), took the battery from it and switched to the DOA Roger mic 1.1. Now DOA Roger Mic 1.1 works!

So I have a Roger mic 1.0, which works but has a dead battery, and I thought maybe I’d try to find a replacement. You know if I asked Phonak to replace it they would want $300 to “repair” it when the “repair” is switching out a $5-$10 battery which takes all of 5 minutes.

I haven’t found a Battery yet that will fit in there but here are the specs:

In the meantime until I found one, I figured I would start this thread for anyone else curious about replacing a battery, or who want to know what the guts of a Roger mic look like. It was relatively easy to take apart with the plastic tool (pictured, blue) by using the tool to separate the top from the bottom and then going down into the mic with the tool facing the direction pictured without damage. 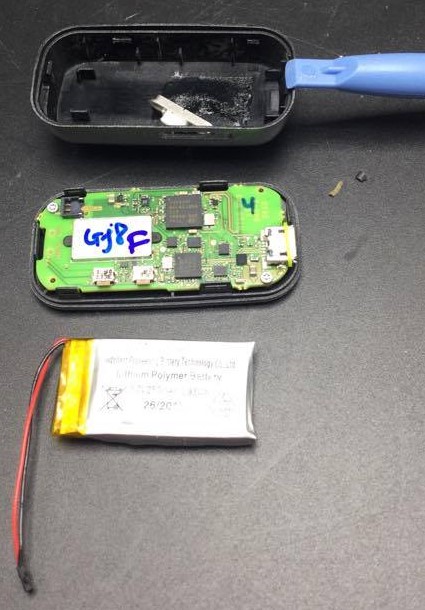 I don’t know where you can get a battery, but I’ll be watching this thread for responses

Did you know that you can get the firmware update application and bring all those up to the latest versions? I bought several off eBay and needed them at the latest version so they would work with the Table Mic. I found this updater on Ponak’s site and it worked great

Since you have it open… can you happen to see where the antenna trace is on it? I would love more range out of them and was thinking that a 1/4 wave antenna for it would be about 31.25mm long. That would be good to use as a lanyard and give a 5db gain which would keep it well within the power limit for the band that it is on

Hi! I’ll check it out tomorrow and give you more info ^.^

I have sent a direct inquiry to Intellect Battery. I used part of your pictur and told them what it’s for. I have one of these with a bad battery. I would very much like to have it working.