A bluetooth dongle might actually be the best idea In this circumstance, because the transmission only has to travel from the viking receiver on my person to the hearing aids in my ears. It’s worth a $30 experiment, I think. The only wrinkle is that normal communication with my smartphone would be lost. If I can make the dongle work at home, I think I will be in good shape assuming the hearing aids can dumb down to being a headset.

Tried pairing my bluetooth tv directly to my Marvels. It paired easily enough but I got a garbled signal instead of audio. I kinda feared this would be the case. Phonak adheres to the bluetooth standard, but that does not prevent them from sending voice data in a different format. So… a dongle will not work. I am buying an external usb battery. About the same size as phonak FM transmitter. I will plug the viking receiver (the thing they hang around your neck) into the phonak FM transmitter. I will power the FM transmitter with the external power pack. If anyone else in the group has Marvels, they can enjoy unencumbered audio. Hopefully, airport security will not think I am carrying a bomb!

Hm, could it be that you tv BT is old version, and marvels might not support old bt?

I mean, marvels do pick up bt from phone and both cases, media and calls. I don’t see why they wouldn’t pick up tv, if tv sends the same type of signal.

My first bt device is marvels so I don’t have many gadgets to play with and test.

About usb battery, just have it in cabin luggage and easy to get out, so together with phone, laptop and so on. Just dump at that box, only one layer of devices and that’s it. So, don’t have all those devices in one closed bag you plan dump into the box because you’ll need to get them out anyway. I bring battery all the time, never problems.

But they’re not allowed to go into the storage, all lithium ion battery powered devices must go in the cabin. Pressure and whatnot.

Thanks for the tip on the battery. I had been considering connecting battery and fm transmitter before leaving. Imagine them seeing multiple little devices with interconnecting wires!

It’s not that hard to plug all that in a few minutes after you get out of the plane, if you immediately need it. 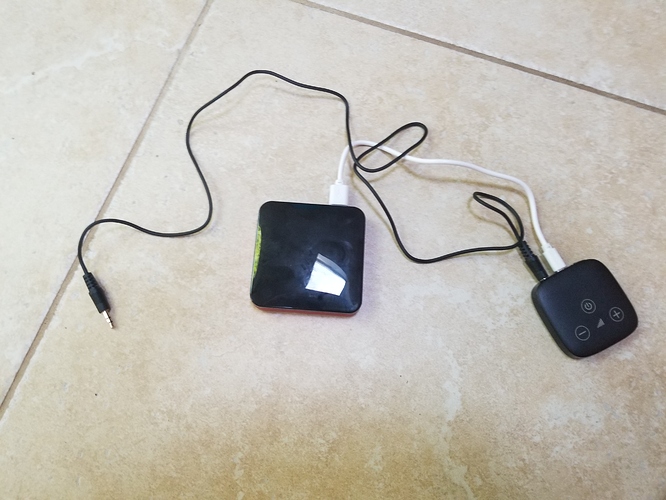 15951880052327162014929540378814032×3024 2.8 MB
Not sure if my picture uploaded, but I will describe it. I purchased an auxiliary USB battery which i used to power my tv connector. The tv connector comes with a Male to Male cord which allows me to connect to any device with a headset connector. The battery came with a short cord which supplies power to two USB connections. The same cord is used to charge up the battery by turning it around to plug the smaller end into the battery, and the USB connector into a power source capable of sourcing 2A at 5V. By happy coincidence, the cord which came with the battery also has the correct plug to supply power to the TV connector.

I can keep the small battery and connected tv connector in a pants pocket, if I want to. The longer connector can easily reach the receiver hanging around my neck, supplied by Viking.

Forgot to mention that I plugged it into my ipad… worked great!