At least two times today I have encountered tones on my 3-year-old OPN S1s that are not described in the manual. It is a 4-tone sound, first at frequency X, second a tad higher in frequency, the last two lower than the first tone. Immediately before these tones, which I hear in both aids, there was a sort of silence but not the silence one gets when the aids are turned off.

I only have 3 programs in the units, and I all the usual sounds operate as designed — i.e. start up and battery warnings and battery failure. Today’s tones were absolutely new to me and the manual tells me nothing.

Anyone have any guidance?

@Volusiano will be able to confirm but from reading other posts on this forum about this issue.

The beeps are saying there’s a Microphone fault and they need to be serviced.

Could be the needs a service tones.

Thanks to both Zebras and Tenkan. This is beginning to make sense. My Bluetooth just dropped offline as well during a call. … And I got the tone again, just before BT reconnected … and then promptly disconnected!

The only 4-tone chime I can think of, if it’s not your program 4 (that would be even tones, though), or battery failure tone (kind of a wind down chime), is the airplane mode chime. You can see the screenshot below and try it out (hold for 7 seconds) to see if its 4-tone chime is consistent with what you heard or not. Based on your description, it seems consistent to me.

Also, in the airplane mode, the wireless functions are turned off. So it’s also consistent with your observation that your Bluetooth connection got messed with.

My best guess is that one of your OPN S1 buttons malfunctions randomly, mimicking a button being stuck in a hold-down mode for a long time (7+ seconds), forcing the OPN S1 into the airplane mode, causing the chime your heard, and also the loss of BT connection. 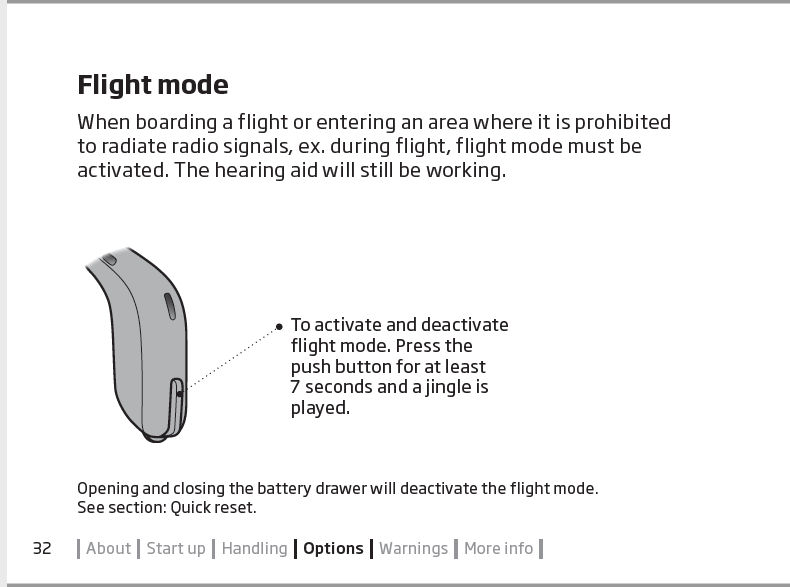 I have a 9 a.m appointment with my audiologist tomorrow. The saga gets more interesting. Today, in addition to turning on the airplane mode (it must have figured out I have a pilot’s license), the aids began jumping from program 1 to program 2 to #3 then back to 2 then back to 1. Most have done it a half dozen times in a row.

I may be within a narrow window of time left on a warranty (can’t find the purchase date but believe it was in August three years ago), so maybe there’s a warranty repair that’s possible.

I’ll report back on her observations. Personally, I think the things need cultural re-education, if any of you are old enough to remember that phrase.

It really sounds like you have a problem with your OPN S1 hard buttons then, if it just does it willy-nilly like that randomly.

If you’re very close to your warranty expiration, this is a good reason to ask for a new replacement for both of your OPN S1 aids under warranty. Even if it were just the buttons on one of the 2 aids that are going bad, I’d still ask for new replacement of both aids, given that if one aid is going bad, the other is liable to go bad soon, too. But if it’s a random thing, it wouldn’t be clear which buttons of the 2 aids are causing it. It’s possible that both aids are doing this, too. It’s just safest to replace the 2 aids.

Don’t know if you have the rechargeable version or not. But if you do, I’d insist on getting new battery replacements as well and not just new aid replacements and keeping the old batteries.

I am embarrassed to say I did not see your note until just now, and I saw the audiology lady this morning. But, because I was still within warranty by about five weeks and the cause could have been within either of them, both aids were sent off for repair. I’m currently using my old Bernaphon something-or-other 9s.

I’m hoping they’ll just swap out the old ones for a couple of off the shelf S1s as its faster and doesn’t consume staff time tearing the old ones down. But, I’m going to call her office since I suspect FedEx hasn’t shown yet and ask whether she could just ask for a straight replacement under warranty. (These use 312 batteries). If not, I’ll probably only keep these until Oticon comes out with its next model, which shouldn’t be forever.

Usually, based on my observation, for random failures like this, they will most likely replace the entire hearing aid for they don’t know where the root cause comes from. It would take them too long to debug and isolate the cause and replace a component, unless it’s very obvious to them where the failure is at, and it’s easy to replace that component. So let’s keep our fingers crossed that you’ll get new replacements instead.

Based on my own experience, when you’re near the end of your warranty, there seems to be a willingness from the HCP to send in the old pair of HAs to the mfg to request a new replacement pair before the warranty expires. There also seems to be a willingness from the mfg to accommodate this request more easily, or else the HCP wouldn’t make this easy to do for their customers.

Thanks. I called the office and asked if they could ask for warranty replacements. the answer was the warranty was for repair, but often the manufacturer would just send replacement units if the repair were too complex. In this case, I have a sense that is what they may do as there are at least 2 separate issues going on, though both are likely switch-related – the random airplane mode and yesterday’s random changing of programs 1-2-3-2-1 1-2-3-2-1 etc.

I’ll unpdate this once I get them back and can check the serial numbers.

An update: The audiologist shipped the units out, I think, Thursday evening of last week. Replacement (either new or rebuilt ones, .though they look quite new) were in their hands Wednesday and I picked them up Thursday. I used some old Oticon/Bernaphon units I had as my last set in the interim. I’m much pleased with the turnaround time and my settings carried forward into the new units. I’ve booked an annual test for later this month with any necessary tweaking to follow that.

Thanks to all for the guidance.