This is a problem that I occasionally have and my Audiologist just provided me with a new pair.
I changed batteries last night before bed and around 4 am the right hearing aid chimed and then shut off waking me up from a deep sleep. The left one remained on. I opened and then closed the battery case for a reset and the hearing aid came back on. The iPhone was off all night so it’s not the phone or any software associated with it. Both battery’s are showing green on the battery tester. If i press and hold the button on the right hearing aid or the left one, both will eventually **chime but they won’t shut off. Problem with the right hearing aid? I use them mainly for Tinnitus masking during sleep. The old batteries that I changed last night were also showing a low green, but I changed them anyway because it was 6 days. After re setting the right hearing aid it worked fine for 8 hours until I decided to changed them both with a fresh pack. I store them in a dry jar during the day when I’m not using them.
Any ideas?

What kind of chime did you hear?

If you hold the button on one of the hearing aids for long enough, they both will eventually chime but they won’t shut off: This is probably the flight mode chime. Holding one of the HAs for 7 seconds will cause both HAs to chime with a jingle to confirm the flight mode. In flight mode, they remain on and working, but they won’t radiate signals that can interfere with the airplane navigation. To deactivate flight mode, you’ll need to reset the HAs by opening and closing the battery door again.

If you hold the button on one of the HAs for a few seconds, both HAs will be muted. But you won’t hear any chime. You may think that the HAs shut off, but they’re just really muted in this situation.

Sometimes a HA may just self restart for certain unknown reason and in this case, you’ll hear the start up chime.

So it’s possible that when you sleep, you lean on the button on your right OPN 1 for long enough (7 seconds) to activate the chime that confirms the airplane flight mode, which waked you up. It’s also possible that the button was pressed further afterward while you were waking up that put it in Mute, making you think that the right HA shut down, but it was really in Mute.

These are just all guesses. I assume that this only happens to you once or maybe just occasionally. As long as they work fine again after you reboot the HAs, then there should be no problem.

Beside the start up chime and the flight mode chime, there are a few other chime such as the low battery chime, and the Service Repair mode chime. They all sound differently. That’s why I asked originally what kind of chime it was, but not sure if you remember it if you were sleeping and it just woke you up.

The chime that I hear could also be described as several descending notes played close together on the right hearing aid followed by the hearing aid going completely dead until it is reset by opening and closing the battery case. The hearing aid will now continue to function normally after the reset. Not the serious of notes played on both hearing aids when they enter flight mode. All tones have been silenced in the settings except for 1. Low battery (Pre-warning 2 beeps) and then its dead (4 descending beeps) and turns off. I could be pressing on on the right hearing aid button while sleeping but why would it affect only one hearing aid? It happen once when I was awake and sitting in a chair, but now I have a new set of Oticons. The previous set did this about 10 times in 2 months so they were sent back to Oticon. Unfortunately the new set is starting to do the same thing. I also have a new set of fresh batteries now but my battery tester still shows the old and the new set “green” so I will see if it helps. I have been using Opn1 hearing aids for about 5 years with no problems until several times in January 2020 when they were again replaced and now this year. Unfortunately when I wake up I will need to take Sonata to get back to sleep. The Tinnitus is very loud during the night hours and is the reason I use the masking setting on the hearing aids and why I don’t need to hear any beeps or chimes. I don’t need to be waken for example for a low battery warning because I’m asleep anyway. I appreciate your suggestions.

Below is the Beeps page on Genie 2 that shows all the chimes and beeps that can be controlled/turned on or off. Perhaps the next time you visit your audi, you can have them play all the tones and chimes for you to see if you recognize any of them as the one you hear that wakes you up or not. And you can also have them turn off any remaining ones you don’t care to have ON to minimize any disturbance to you.

But at any rate, this is all I can think of to recommend to you as above: go through this Beeps page with your audi to see if you can recognize the chime you heard, and disable anything you don’t want to hear.

Also the fact that the HA constantly is generating a tinnitus sound, it can cause a heavier drain on the battery until it reaches the point of temporary battery failure. But after this causes a shutdown, the battery recovers by the time you wake up and test it out so that’s why it still shows a green status on the battery. All of this is only a guess, of course. 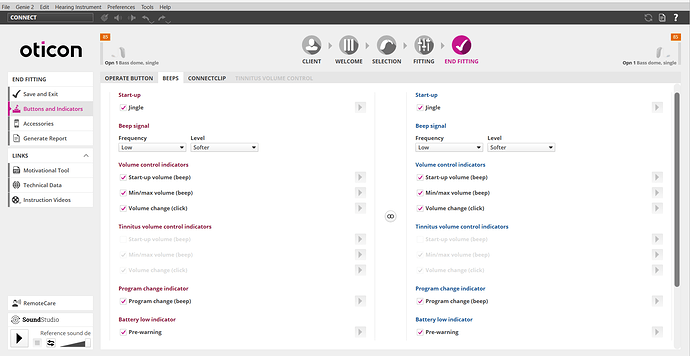 I have a copy which shows my own Oticon beeps page like you have provided. For some reason, as a new user on this forum, I am not allowed to up load and post any images. Basically every box on mine has no check mark in it. My Audiologist also sent me the following email:

"So I called Oticon:

1. Hearing aids were replaced
2. No other beeps I can turn off. These have to be on there

3. Suggests it could be moisture in the battery department

*** 1. Have you re-activated your dry jar lately? If not, follow instructions to re-active jar***

4. There is a mute option on the program button. Would give a beeping sound and then turn the HA off until you press it again to turn on. However it would do that to both if it was activated. We also had the program button turned off and still encountered issue
5. Try new batteries – voltage may be off
6. Did you get a new pillow putting pressure on hearing aids? Or anything new in your bedroom/house that may be chiming?"

I have done everything she has suggested so I’ll have to wait and see what happens. Last night I had no issues.