I’ve been struggling with several issues with my Rexton BiCores as new HA user. I just had a sort of epiphany about one of them. The snap, crackle and pop sounds I hear either with facial motion or some body motion and also sometimes seemingly random. I tried tulip domes for a couple of days and went right back to open domes yesterday. They gave me domes that are 5 mm instead of the 7mm ones I had and the noise issue was much worse. Could my noise be caused by the fit of the dome in my ear not being perfect and causing movement of the dome leading to noise? Or maybe even that the wire from the HA to the dome is too short? Nothing else seems to explain all these noises I’m hearing at times during the day. The only other option that I can see is that the HA, both of them, are bad, very unlikely. Talking to other neighbors that have CostCo HA, none of them have ever had this problem. Maybe I have a strangely shaped ear canal? I doubt the next size up, I think it’s a 10mm will fit my moderately small ear canals comfortably but 5mm is way too loose and will at least get the 7mm ones that I had originally today. The 5mm ones seems louder too for some reason I don’t understand.

I once had a different finish applied to my custom aids and it created a ticking sound whenever the aid moved in my ear or the seal was broken (which was a lot). A different coating on the aid took the noise away and I haven’t had it since. Go with your gut feeling and try the better size. There may be a different finish available and also a hot ear canal may lead to more of a noise caused by fit due to moisture. Hope you get it sorted.

Thanks. The Bicore also have the wire to the dome exiting downward instead of out the front which could make it rub my ear more. Just guessing but this is an all day thing that is driving me batty, lol

I can understand that. Trust your instincts and work with the dispenser, I am sure you can get this sorted.

Looking at of how a bunch of behind the ear HA fit, mine look to be somewhat on the top of the ear more. That downward exit from the HA body is part of the cause pulling the HA more forward on the ear. I can’t generated noise by touching the wire but right at that exit point from the body and the body of the HA (of course) generates a lot of static and crackles. I’m going to stop at another Costco closer to me tonight to ask one of their fitters about this to get a 2nd opinion. 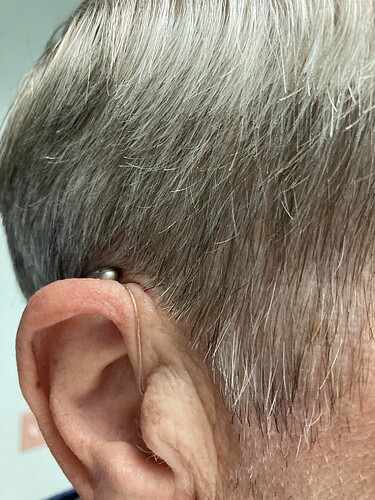 That does look very tight against your ear. The tension may be pulling on the wire causing receiver malfunction, or compromising the fit as you say. I don’t wear RICS but others may beable to advise more on how it should fit. There should be a longer receiver wire available to you.