As I understand it, your hearing loss dictates the dome type. What about the “plugged up” experience, hearing your own voice reverberate, is that simply a byproduct of closed domes and there is nothing to be done about it? I do wonder b/c when I push them in a bit deeper, and they are situated just so, it goes away, my voice is normal and I can hear well. But they quickly slide back out a little, hitting the right angle or whatever inside, and I’m back to the fingers in ears feeling. It really bothers me when I eat so usually take them out then… anyone have any take on this?

I’d say “dictates” is too strong a word. Suggests is more like it. I’m no expert in this, but options that might help you out, in no particular order would be a different sized dome, a dome with more venting, perhaps a longer receiver wire if a shorter wire is making your dome slide out or a custom mold (of which there are multiple options) My take is that you either need more venting or a deeper fit (or perhaps both) A custom mold is likely the most direct way to obtain this, but experimenting with different domes is ok too. Posting your audiogram would allow others to give a more informed opinion.

I’m a provider, and I agree with @MDB on this one. I would like to see your audiogram before I gave any sort of specific input, but the information MDB has given is sound. Sometimes, trial and error is worth the time.

I’ve also understood that more deeper the receiver in your ear canal, the less occlusion effect. E.g. Phonak sells the Lyric as a less occluding device due to the deep position. I wonder why it’s not possible to combine a deep in the ear sitting receiver with an behind the ear HA to be able to reduce the occlusion. Is there any deep sitting custom mold on the market?

@steffner I believe it can be done by making a mold and attaching it to a longer receiver so that the mold can sit more deeply in the ear.

The whole notion of reduced occlusion due to deeper sitting receiver has been really hard for me, personally, to grasp. I haven’t been able to wrap my brain around how that can work. So far, when it’s been necessary, I just do it and accept it.

I’ve been trying to find information as to why the deeper molds lessen occlusion, but have not been successful thus far. I haven’t been trying very hard, mind you, as it’s kind of low on my priority list. Guess I have homework this weekend!

This isn’t really an explanation, but my understanding is that it has something to do with being in a part of the ear canal that is in direct contact with bony structure. I do not understand why that makes a difference.

The out part of the canal is cartilaginous but when you get beyond the second bend of the canal it is just skin on top of the mastoid bone. It is when you are in the bony portion of the canal (like Lyric) that the occlusion effect diminishes. I know it may seem contrary to normal thinking but that is just the way it is.

I’m not an experienced HA user, during the past month I’ve tried just a few of them. From my short experience, all I can say is that I got used to the sound of any HA, from Signia to Oticon and even to unpleasant Phonak. It’s just a question of time. What I never got used to is the occlusion. If a deeper placed earmold can eliminate/reduce occlusion effect why it’s not a general practice? It’s a little bit tricky inserting it, but I’m sure there is a solution to that.
On my first visit by audi I was asking for the Lyric. The audi told me it won’t suite my needs, as my hearing loss is sever in high frequencies. The device is too small to integrate more power. Why is not possible to combine the Lyric (or any other sort of deep sittung receiver) and use an external device for the more power needed and the connecting parts (bluetooth and any other components that do not fit in the Lyric) and connecting them wirelessly to transmit the signal. Like an external microfone. With the modern technology should be no problem. No/minimal occlusion, no ugly wires, maybe no device behind the ear.

It really bothers me when I eat so usually take them out then… anyone have any take on this?

Perhaps it’s a YMMV issue partly dependent on how easily one adapts, just like adjusting to wearing HA’s in the first place. The world sounds different to me with and without HA’s. I wear totally occlusive molds by choice. With time I’ve totally habituated to the way things sound with and without HA’S. Sometimes if you want to let something bug you, you can be sure it will.

Here is my AG. I should clarify I don’t think the wire is too short and pulling the dome out, it’s just a very minute positioning that doesn’t really stay when pushed in very deep. It’s a Phonak Vented Dome 4.0 L. I grabbed some Mediums and they are much smaller, don’t think that is the answer… 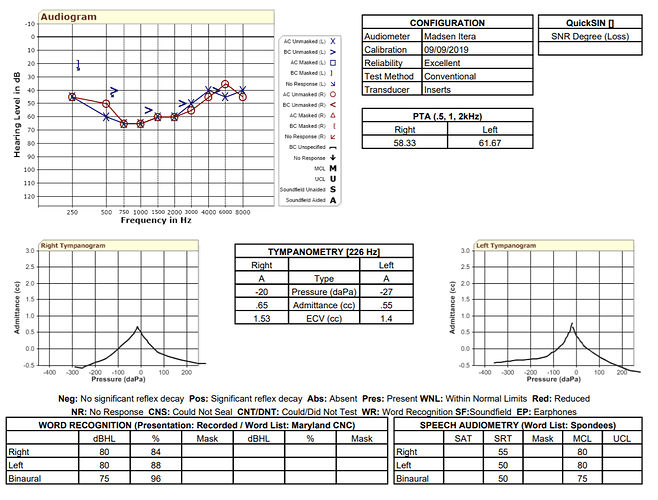 You would probably be fine with some venting.

Ok. Do you mean a slightly larger vent hole in the same style domes? Came across this, not sure if it’s correct information or not 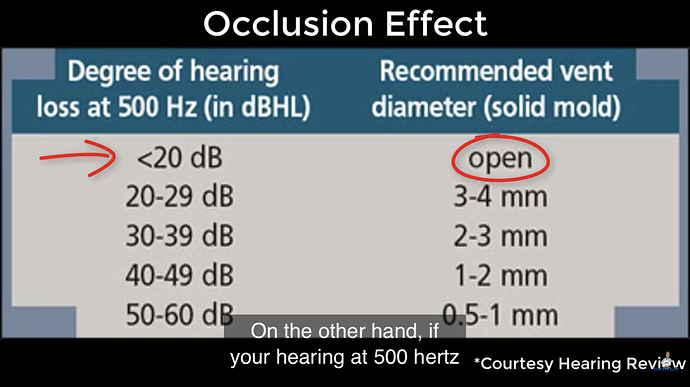 Looking at your audiogram I would think you are in a position to use custom earmolds or power domes. Not absolute but usually hearing loss in the 40-50 dB range and higher need molds.

This could cause occlusion but that is also tunable in the aids.
The better fitting molds will be odd at first but along with that you will hear everything with much better bass.

I’m inclined to agree that custom molds are likely your best shot. It’s going to be hard to get the gain you need to the low frequencies with much venting.

Looking at your audiogram I would tend to concur with @Raudrive and @MDB. I would look at something along the lines of a hollow sleeve mold, if I were fitting you. They can be made to sit nice and deep in the ear canal and can be “redneck engineered” to be more open or closed if necessary. You can get a good tight seal with them.

As I state on here a lot, I am NOT a physician or an audiologist. I’m just a hearing aid dude. That being said, I would be interested in learning more about what may have caused this hearing loss. My first thought is that it could be congenital. But what jumped out at me is the MCL level. It’s not crazy unusual, but it seemed a little higher than I would expect for your hearing loss. As I am often quick to say though, “Every brain is different.”

Your hearing loss at 500 is 50 and 60. Your chart says .5-1.0 mm. That amount of venting may give you more comfort and still not have a feedback problem. Custom mold is a good suggestion and the venting can be controlled better with a custom mold.

Never heard of it. Brain-pain. Starting to make sense.

…a voiced sound, the vibrations within the vocal tract are transmitted by bone conduction through the skull to the ear canal. When talking, the movement …causes minute displacements of the cartilaginous portions of the ear canal …these sources of vibration set into motion air particles within the ear canal… These self-generated acoustic effects are always present when a person vocalizes or talks, regardless of whether the ear canal is open or occluded. In the case of the open canal…the sound is leaked into the environment outside the ear. However, when the ear canal is occluded with an earmold/shell that terminates in the cartilaginous portion, the sound is unable to escape and is trapped. The occluded ear canal becomes a resonant cavity, and the low frequencies, which have been boosted, pass into the cochlea…

Sound in your head (own-voice, chewing) passes through the soft part of the ear canal, then normally out to the world. If blocked to the world, it fills the canal with boom. If the block is pushed way in to the hard part of the canal, very little sound comes through bone (or does not pass well from bone to air).

Or so it seems to say.