My mid-low frequency hearing loss story as a musician

Hello everybody, my name is Martins and I come from Latvia and I want to share my unique story, maybe not so unique in the end. And I have to apologize that my problem is not tinnitus but it is hearing loss. But I couldn’t find another forum.

When I was 2 years old (now being 22) I had meningitis complications after the illness was moderate hearing loss in left ear and little hearing loss in right ear. The damage is mostly in low and middle frequency range (see the attached audiogram).

I still remember first time when I and my parents realised about hearing problem. I was about 4-5 years old and my grandmother was speaking with family member on the phone and she called me over so I can greet my relative, she put the phone to my left ear to which I responded : "Grandma, I don’t hear with this ear! " instead I put phone to my right ear. After conversation was over she was confused and she asked me what do I mean by not hearing with my left ear and I answered to her that it’s normal for me. It was just the way it was for me and I thought that every person hears less with one of their ears.

Couple of years went by and my parents, more precisely my grandfather decided to take me to music school (piano lessons) funnily enough to take your kid with hearing loss to music school. I wish I could ask today my grandad why he chose music out of all the other possibilities. Anyways I didn’t like it (keep in mind that Latvia is post soviet country so the teaching methods and teachers where rooted in USSR kind of approach, where all the problems most of the time are seen just a lack of discipline and lack of practice briefly speaking) in fact I hated it I wanted to quit many, many times but my parents outsmarted me with finding excuses about finishing the year and then we would see, then when year was finished there was excuse, but look how much you have already finished etc. Nevertheless until age of 15-16 I was playing piano and singing in music school, singing being my main subject. Around age of 15 I had to switch from singing to wind instrument and it turned out to be trombone. If you are still reading - the bell of trombone is next to players left ear (its my most damaged ear).

So I started to play trombone and again I didn’t enjoy it like the rest of musical activities I had to do before in music school. But around same time I discovered purely by myself rock music and the sound of drums and guitars and I started to learn to play guitar and became obsessed with it. Although I already have been playing instruments and singing I actually had no any clue about what music really is but through guitar I for the first time in my life I really experienced and understood it.

Time went on, life happened and I studied trombone in highschool instead of guitar I was suffering because I was not able to hear my instrument properly I suspect that was also the reason why I didn’t get attached to the instrument. I was not able to produce pedal tones still I’m not to this day. I’m kind of tone deaf in low register although I have played bass guitar for couple years as well, mostly relying on my eyes instead of ears. It was really difficult for me to do same things on trombone as my fellow classmates. Teachers expected from me the same level as from the rest of the students. I was completely in myself I was not telling anyone about how I felt. I had a difficult time when I had to play together with piano accompanying. I think it’s because I kind of have one ear with which I can hear defined pitch if I close my good ear and listen to music mostly what I hear is drum cymbals or anything else in that frequency range. Nevertheless I survived music highschool I graduated. I went through serious anxiety, stress and panic attacks I was completely depressed. Teachers and my parents didn’t really understood my situation and i also didn’t really know how to properly articulate myself.

I went on to study abroad I auditioned for the music conservatory in Netherlands I got accepted and now I’m in my 3rd year of bachelor in music. I see it as life brought me here, it was not my own conscious decision to come and study here. But luckily I’m in very nice environment here where I can explore myself much more than I would be able to do it in other conservatory’s.
Teachers, parents my girlfriend at that time encouraged me to come here. I have hearing aid from Phonak, high end one, but it’s basically useless when it comes to music.
My biggest issue is to recognize low frequency sound so maybe somebody has similar hearing loss and have suggestions how could I practice it. How to deal with it.

Welcome to the forum.
I really enjoyed your post.
Your attached audiogram is very helpful.
We have many musicians on this forum. They will help you about how to set up your aid or aids for music. Your Phonak aid can have a program tuned special for music. Turning off the whistle block will help.
Good luck.

Thanks for sharing your story. Very interesting.

Welcome to the forum. Being a musician with a hearing loss certainly is a challenge. You say you have Phonak high end aids, but they are not working well. What specific model do you have, what receiver, and what type of fittings are you using? Do you know what kind of prescription is being used? I am of the view that the limitations of a hearing aid is almost never the brand, but much more likely how well they are fitted to the user. Your right ear is quite correctable, and the left more of a challenge. The good news is that bass frequencies are not all that directional and your good right ear should be able to compensate for most bass. The left will need help.

Hi Sierra, thank you for reading and responding. I have Phonak audeo B90-312 and I haven’t seen my doctor for more than one year for updated fitting, but I have appointment with ear doctor in the beginning of January. And to answer all your questions I don’t know what kind of fitting, reciever and prescription I am using.

Welcome @milkins95.
TLDR: Your aids can be programmed better, but you’ll probably have to do it yourself.

Programming
It is a challenge to get the right programming for music. I play the piano and after about five extra visits the hearing aid dispenser gave me his old serial Hi-Pro programmer and the software to figure it out myself.

Marshall Chasin has published a lot about programming for musicians, but his pointers remain clues to programming, not the final solution. The piano is rather loud, so that introduces extra problems. I am able to program the Phonak Bolero SP 90 aids to my satisfaction, nowadays, but issues remain. Sometimes the piano is out of tune, sometimes the aids. Sometimes it’s my hearing that has changed slightly, sometimes it’s the slim tubes that have gone wrong. Anyway, you can’t get a good fit without programming them yourself or going to a specialized musician’s clinic, which we don’t have in the Netherlands, IIRC.

It is hard to get an audiologist to program you aids correctly for music. But you can try and give him a few pointers.
First the crest factor: The difference between the loudest and softest sounds in music is about 18dB in difference, while in human speech it is 12dB. That means that overall the volume of your aids in the music program should be 6dB less. (I prefer 8dB, myself.)
Second the harmonic distortion. To ensure that higher harmonics don’t get distorted by amplifying them differently than the lower frequencies Chasin suggest that a 1 channel amplification would be best: all frequencies amplified the same same. However, I haven’t been able to force my Phonaks even close to test that out. He also suggests to limit the compression ratio to less than 1.3 and equal for all frequency channels. The compression ratio gives a number to the difference in amplification between soft sounds and loud sounds. So if the soft sound is amplified by 30dB and the loud sounds are amplified by 15dB that ratio is higher than if the loud sounds are amplified by 20dB.

This is Phonak Target’s normal Music program for my audiogram: 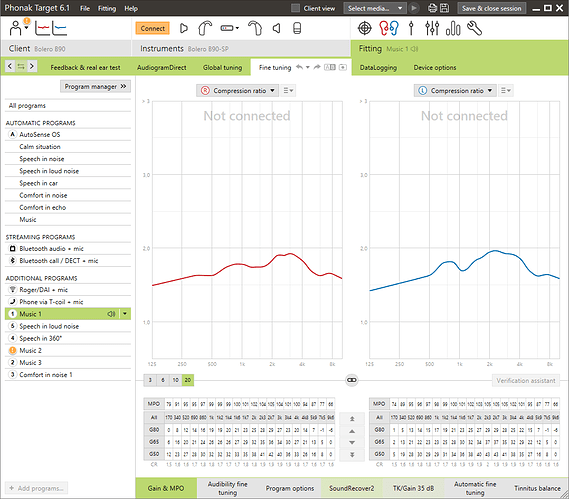 This is my adapted program: 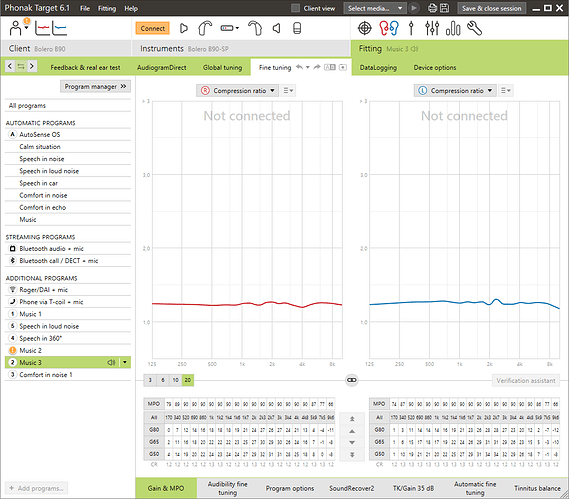 You can see that the softest sounds at G50 are about 8dB softer. The G80 and sometimes the G65 are tuned so that the graph of the Compression ratio is nearly flat under 1.3.

Acoustics
In the first years I had more open domes to allow sounds that I could hear quite well to reach me directly. Those sounds interfered spectacularly with the sound generated by the hearing aids. I remember a post from the cookie bite chronicles that fixed a piece of gum at the back of her open domes to block the direct sounds to improve playing music. So a thick barrier is welcome. Preferably a power dome of a custom mold with a little vent.

Difference between ears
My hearing loss is quite the same with both ears. So, I don’t know whether music will ever sound good if the one ear has that much more loss than the other. My hearing loss increased from -30dB to -55dB and I must honestly say that I can hear the piano much better nowadays as when I had a strong cookie bite dipping in the middle. The differences in hearing loss between the frequencies is now much less than the hearing loss. So there are things that are hard to compensate for.

Microphones
The microphones of the hearing aid have a limited reach of decibels for which the can correctly digitize the sounds. They used to work from 0dB to 100dB. If the music went beyond that range it would get distorted. Chasin’s low tech suggestion was to put cellophane tape over the microphone vents of the hearing aids to add a few dB’s of buffer, effectively shifting the range to 10-110dB or more depending on how much layers of tape one used. It is still a valid method for determining whether the microphone is a source of distortion, though! However, nowadays, the music program of your aids should have a better range for handling music, than they used to.

Audiologists
Looking at the copy of your audiogram, the format looks the same as mine. So if you’re going to the Erasmus MC KNO poli, say hello to your audiologist Allard Knoops from me. I found that the university audiologists are the most willing to spent time and teach you about what you should know (to better inform them how to tune your aids.) However, most audiologists, even the hearing aid dispensers seemed pleased if you read about the technology and asked them questions. There is a huge difference in the quality of tuning between audiologists. So if one can’t answer your questions or won’t or tells you it takes years of study to understand: please switch audiologists until you have a good one.

Thank you very much Markismus for your expanded response. This is all new to me so I will have to read it through more times to understand it.
This audiogram was made during free hearing test we could recieve in university, but in beggining of January I’m gonna have appointment with Dr. Jan de Laat in Leiden.