I am new to this forum. The reason I’m here is that I’m looking for advice in particular from people who have unilateral hearing loss. My baby boy who’s almost 6 months old has severe to profound sensorineural hearing loss in his right ear. We were told by ENT that hearing aid wouldn’t help him. I would like to know if this is accurate. If there is anything that would help and benefit him, we would like to consider it. I would also like to hear from people who have unilateral hearing loss, what is your experience like growing up? Is there any advice you could offer to help raising my baby boy? Thank you a lot in advance!

Hi Annie welcome to the boards. I’m sorry your little boy has got unilateral profound hearing loss. Firstly do you have a copy of a audiogram you can chart into your settings or upload a screen shot. This will help some of the more experienced members give you a more accurate opinion. Did your ENT mention what sort of residual hearing he has in his deaf ear? And his good ear what sort of hearing does he have in that ear?

I myself grew up with unilateral sensinaural loss, it’s only in the latter years that what I consider my good ear took a huge tumble downwards. I had and still have good residual hearing in both ears so I didn’t have a lot of difficulty growing up. Mostly getting people to project their voice towards the person is the problem. If you face your son when talking you won’t have a lot of problems. On the other hand if you turn your back to him and talk you could have a lot of problems. So his teachers at school will need to know about his hearing loss.

Good luck with your wee lad.

Do you have the option of a cochlear implant on that side?

Hello Annie,
I recently heard Dr. Amanda Griffin, Director of Audiology at Boston Children’s Hospital at Waltham talk about Effects of Pediatric Unilateral Hearing Loss on Speech Recognition, Auditory Comprehension, and Quality of Life. You may want to call her office or google her. In a study she did, school age children with unilateral loss were often under supported in school because people think they can get by with one good ear. A hearing aid, preferential seating, and FM showed significant benefit. I know your child is still young and I encourage you to get another professional opinion.

Annie: This resource may or may not be useful to you. Take a look and make your own judgment:
http://www.californiaearinstitute.com/ear-disorders-singled-sided-hearing-loss-children-ear-institute.php
In addition to sufhi’s suggestion, another potential contact (perhaps depending on where you are located) is Dr. Joseph Roberson at the California Ear Institute (which is the source of the link above). I have a high regard for Roberson. He’s a world renown ear physician/surgeon with a lot of pediatric experience. He has authored a book for parents of children with hearing loss: 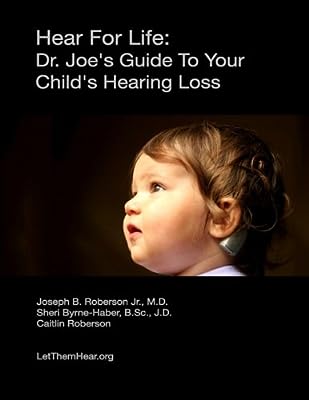 (Black & White Version) If you have picked up this book, it is likely that your child or someone you know was recently diagnosed with hearing loss. Without a doubt, what you face is serious. However, ...

Thank you for your reply. Here is a photo of his ABR results. We were told his hearing in left ear is good. Did you wear any hearing aid growing up?

Thank you once again!

My ENT said that in Canada, we don’t do cochlear implant for unilateral hearing loss. I’m not sure what that means. If it’s not funded through health plan or it’s just not recommended. I should have asked to clarify.

Thank you for your advice!

Thank you! Will definitely get the book.

I think they are currently doing a study at sick kid’s hospital in Toronto that may offer acces to a partially funded CI for unilateral losses. If you are outside of Southern Ontario, that probably doesn’t help you? I have NO idea how referral across provicial borders might or might not work. You might be able to call the ENT you saw and ask whether it is even a possibility. Double check with your family doctor.

If that doesn’t end up being a possibility, your son should be followed by a pediatric audiologist anyway. In Ontario, these services would be covered through the infant hearing program until he is six. Your audiologist will provide you with strategies and help to advocate for services once he’s going into school.

CAnnie I had parents that didn’t believe I couldn’t hear with my left ear when talking on the phone. So no it wasn’t until later in life that I needed to get aids.

I’m currently going through the process for a unilateral CI. I live in Australia but the number of children at the hospital under 12 months who have been fitted with a CI is amazing. Was the ENT Dr associated with the Children’s Hospital? If not I would be seeing if I could get a second opinion from a specialist in a Children’s Hospital that’s closest to you. Or better still the hospital @Neville mentioned. Please don’t just accept just one Dr’s opinion get a second or third opinion even if you feel it’s necessary. Good luck.

You should also be aware of how to teach him to protect the hearing he has as he grows up. This includes not using loud earbuds for music when he starts to listen to that. Take advise from an audiologist about how to protect his good ear. Also remember to tell any medical practitioners that he has only one good ear so they can keep his hearing in mind when prescribing.

Yea, well, I’m no expert that’s for sure but I’d get him a hearing aid for it experts or not. Much is currently being made of people whose brain stops listening without input. Not a lot in support of that scientifically I guess, just logical guesswork. With the child so young and the brain so plastic at that age is there something to loose?

I asked our audiologist to clarify why cochlear implant isn’t done in Canada for unilateral hearing loss. It was easier to ask her as I could reach her any time where as our ENT requires appointment in advance. She said the research in Canada doesn’t support it and that there are many different type of cochlear implant, so even if we do decide to go out of the country to do it, it wouldn’t be supported in Canada. But it sounds like it is done in Ontario… so that contradicts what she’s telling me.

FYI, we live in British Columbia.

I would think so too but we were advised that hearing aid could only amplify sound and with our son’s hearing loss, sound would be just loud but unclear so it could distract with his hearing on the good ear.

Vanderbilt University in Nashville (I know it’s on the other side of the North America to you) they do a huge amount of research into deafness. It could be worthwhile making contact via email to see if they can offer any further insight into your sons issues.

It’s only being done experimentally in Toronto. So there would be a lot of hurdles to try to get into that study. The research is being done to try to determine whether or not children with unilateral hearing loss benefit significantly from CIs. The evidence is still not strong, so your audiologist is correct. As for going to get it done privately in the states if you have a spare $100k, there aren’t THAT many CIs that are being used and as far as I know most of what is being implanted in the states is going to be similar to what it being implanted here. But that being said, once the device is implanted it has to be maintained and re-mapped and I don’t know how you would go about having that done in Canada. Most that stuff is done for our CI users with some help from OHIP and so the CI audiologists work within that structure. As your son’s wouldn’t be covered, you’d have to find someone who could offer it privately. That could be tough to find, and also expensive.

It is probably worth making the point that this is major surgery with significant associated risks for something that we aren’t sure offers significant benefit yet.

A bone-anchored hearing aid would be another surgical option. BAHAs were developed to send sound via skull vibration for people who have a functioning inner ear but a dysfunctional outter/middle ear system. However, because they also effectively send the signal through the skull to the other ear they are an option for single-sided deafness. But again, evidence of strong benefit is still limited. The surgery is less invasive, but still surgery.

A CROS system will be an option, but not until your son is much older.

Many people do fine with one normal-hearing ear. There are certainly accommodations that should be put into place in school. Family members should be aware, and your son should be taught to advocate for himself as he gets old enough. More care should be taken at either end of life: It is common for young children to have a build-up of fluid in the middle ear that effects their hearing and therefore can effect their language development. With only one normal hearing ear, the system is missing some natural redundancy, so you probably want to be alert to times when your son isn’t hearing as well out of his better hearing ear, and see an audiologist and/or speech language pathologist if you are worried just to make sure that language comes along well. (I’d say emphasize reading together, but that is standard advice for all children always.) Once your son is in his 50s (a lifetime from now!), he’ll probably want to be alert to hearing loss in the good ear since he will be more impacted by hearing loss than someone with two normal-hearing ears.