Apple has released IOS14.6 it claims to have fixed issues with Bluetooth connectivity.
Apple’s full release notes for the update are below:

AirTag and Find My

Anyone out there using AirTag? The wife and I always have a problem finding each other in grocery stores, Costco, Walmart, etc. In fact, I got my first cell phone only in 2001, laggard that I am, because the wife and I couldn’t find each other in a Walmart SuperCenter for 30 minutes - she had a cell phone as an MD, I didn’t. But half the time if I call her or text her when we’ve lost each other, she doesn’t hear her phone ringing or binging because it’s buried in her purse.

So the wife doesn’t want to use AirTags with her iPhone. But the idea is that I “AirTag” her and then hopefully when I’ve lost her but I am in somewhat of a proximity to her, I’ll know which way to go, at least based on signal strength. Obviously, I want it to be a private AirTag as I don’t want every other iPhone user in Walmart to be alerted that they just passed by “WIFE.”

The ReSound Multi Mic, when the wife is wearing it, works as a very primitive AirTag, because if I am within 80 to 100 ft of her, I can hear the noise from the mic on her. But because background sound, etc., comes and goes in volume, it’s very hard to tell if I’m getting closer to her or not. Having the sound drop off from her mic is a clear indication that I’m going in the wrong direction but I’d like a signal indicator that’s more incremental and rapidly shows increasing signal strength as I move in the right direction. Compass-like directionality would be even better!

Edit_Update: Yep! AirTag has what I want. Directionality and relative distance to tag! But I’ll need a new iPhone! The Ultra-Wideband technology for precise location is not supported in early versions of the iPhone still able to run under iOS 14.x. Oh, well! Until I get a new iPhone, I’ll tag myself and let the wife try to find me! 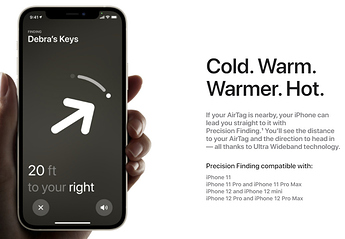 Since an ordinary battery can keep the tag broadcasting for one year or more, perhaps they could put the UWB technology into HA’s so you could find your HA more precisely than with just BT signal strength between your smartphone and your HA’s as some Lost HA applets in smartphone HA apps do now?