I wear a dome in my right ear but I wear an ear mould in my left.

I’ve currently got a soft ear mould and I’m finding my ear gets quite wet.

I’m trying to research if using a hard ear mould is better in terms of the ear becoming wet?

Do any of you wear a hard ear mould, how do you find it?

I have to pay for my ear moulds so don’t want to get a hard ear mould if the same problem exists.

I wear hard ear molds and I have no issue except when I am out doing my exercise. I personally cannot wear the soft ear mold, I seem to be allergic to the material the soft molds are made from. I was not able to use domes for the same reason, my ears would itch then turn red.

The end of the ear mould to the ear drum for me, remains dry. The part that becomes wet is where the ear mould actually touches my ear. I wonder if that’s because my ear doesn’t like soft ear moulds.

I have worn stay dry tubing for a few months to see if that helped but it hasn’t.

Seems it would not matter what type of material the mold is made of. You need the same seal for hearing aid performance. This seal is the lack of air flow which causes the dampness.

I wear soft silicone molds. I have times my ears get wet and most of the time they do not get wet. I suspect it’s me, not the molds.

will I have very small vents now I still have venting. I clean my ears every morning before puting in my aids. and I clean my aids every evening before they go in the dryer
For me I just flat sweat a lot, even in the winter.

I have hard moulds in both ears and find that when I remove the moulds for night, that my ears are often damp. Particularly when I’ve been streaming tv before bed, ie. watching a movie, it seems to be the most prevalent. Especially since I have gotten the new mould for my left ear, which has a ‘tail’ (for lack of a better word) that sits along the bottom of my ear, it is more noticeable for me.

I sweat a lot even in winter as well.

I sweat because of medication so the soft ear moulds that I’ve had all my life, wasn’t an issue before hand.

I’m hoping to one day come off the medication.

Think I’ll have to live with the dampness in my ear.

Some 14 years ago I was fitted with HA after allergic response to something used in a bathroom remodel caused sudden hearing loss. The audiologist did an exceptionally good job in process of programming. Then in a week my ears were crusted, beginning to bleed everywhere the custom molds touched. She said I couldn’t possibly be allergic to the silicone molds. Much later I found an audiologist who would order lucite custom molds. (A suggestion from a member here!)

Now months after successfully wearing my Signia HA I’m developing redness, irritation in my right ear. It has different material over receiver. Uh-oh! Also, it’s the ear I have better hearing. I’ve been mostly now back in ancient Phonaks. (COVID-19 Social Distancing)

I have used both. I get dampness and redness in both - more so in the soft than the dry. It fluctuates in how heavy the wetness is - sometimes itchy, other times not.

I am using soft molds now. The soft molds are better for severe-profound since they make a better seal. Of course, that brings more moisture from less airflow - especially if you have a no vent or a small vent. If you switch to hard mold you might get more feedback.

I’ve always had hard moulds, but never experienced wet ears with them. Maybe it would help to speak to the dispenser/specialist before having the mould made and seek an opinion?

My original cic aids(PHONAK 1997) were miserable because of the trial and error with the imperfectly formed shells. The most aggravating factor was a lengthy period of a sore and runny ear canal, particularly on the left. Eventually, the problem would resolve itself, but would come back after the instruments were returned from servicing. I finally decided that the problem, since it presented on the left, was due to the blue coating. The red coating apparently has a different compound which doesn’t cause an allergic response. Since then, I’ve had PHONAK silicone domes without a problem and, more recently OTICON Opn’s with domes. Then I changed to hard acrylic moulds which are not color coated. The reason for the change: I had to insert the domes so far in order to get maximum benefit that they would become detached and had to to be removed with tweezers, especially after exercise. I tried a number of different sizes, including the grip tips, which were not ideal because they aren’t made for 100db receivers. The moulds have worked out fine with no irritation, condensation, or soreness. The first pair fit properly, with only a mild increase in occlusion.

My friend wears OPNs and has 2 x blue acrylic moulds because she’s allergic to the red. The lab rang her audiologist asking why they wanted 2 x blue ear moulds.

Well I now have a hard ear mould (with no vent) and my word, my ear is so much dryer. I can wear my left HA all day without any issues.

The ear mould is very tight fitting but I do get a lot of feedback, after maybe 10 seconds of the ear mould being in my ear, the feedback stops. I wonder if that’s because the feedback block is kicking in. I don’t get the feedback with the soft mould. The hard ear mould was made from the same impression as my soft ear mould.

(My left ear is 100% conductive so requires more power.)

I have never worn a soft ear mold, but I have been told that they conform better to the ear canal and give a better fit and less feedback. I am doing my research now for new aids being decided on the first of June. I know I want ear molds, but I do sweat extremely bad. I now have ITE hearing aids, I went out for a walk yesterday, the humidity was the lowest we have seen it all spring, and I still sweated buckets. I got home and the first thing I did was put my aids in the dryer, and ran the dry two cycles. I could feel the wetness in my ears to the point I was not longer able to hear before I got home. And my aids have vents, and with the feedback I get sometimes, there has to be leakage other than the vents.

I also sweat buckets due to medication.

I do agree that soft moulds allow a better seal.

I don’t know my friends audiogram but she wears Phonak Naida SP aids and she has had to have hard moulds as her ears don’t like the soft moulds. To get around the feedback issue, she has a long ear canal length past the 2nd bend.

I think that’s what I’m going to ask for and get a re make of my ear mould.

My friend only sent me pictures of her ear moulds today otherwise I’d wouldn’t of known as they are always in her ears.

If you can show the ear mold please do, I am getting new aids this summer. I go the first of June for my hearing test and to make the decision on the aids I will be getting. I know I want ear molds, I also believe I want BTE aids and not the Rite aids. 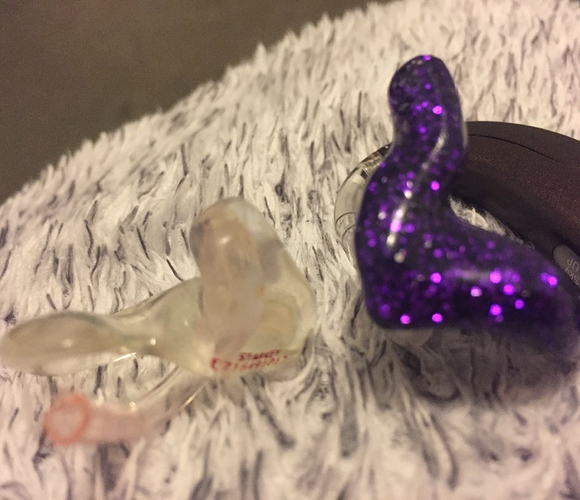 thank you very much, I wonder how hard they are to get in?

I would imagine quite hard, I’ll have to ask.

This is my experience with soft verse hard molds. Every person is different. I have worn HA for 62 years and always had hard molds except once. When they first came out with the soft mold I wanted to try them as I thought they would work better and seal better to stop feedback. I found them harder to insert into my ear as they would grab the inside of my ear where the hard mold would just slide into place, my ears did not like the soft molds. I tried them for 1 mo. and went back to the hard molds. I have worn the same hard mold for the last 7 years and do not even know the are in my ears. I have never found them hard to get in my ears. My molds came from Costco and I also have a long ear canal length mold. Good luck.