Does the Phonak programming software still have settings for compression?

I just got a pair of Phonak’s Marvel Virto-M hearing aids a couple months ago to replace my 5-year-old Virto-B aids. I usually need a while to adjust to the different sound of new aids, but I’m having a harder than usual time this time around. As someone who wore analog hearing aids until about 10 years ago, and as someone who’s also blind and prefers more sound rather than less, I like to have my audiologist turn off as much filtering as possible. But he tells me that Phonak has dumbed down the software quite a bit and doesn’t give him as many options as he used to have.

Chief among these is compression. I like light compression on my hearing aids, especially in my calm situations program that I use most of the time because, as I said, I prefer less filtering of the world around me. My understanding, at least as of a year ago, was that audiologists could choose between prescribed, semi-linear, and linear compression. He tells me that compression settings are no longer something he can change, and I think this is one of the problems I’m having adjusting. Quieter sounds are lacking highs and clarity. Louder sounds are causing the mids and bass to go way down in volume and the highs to sound distorted. And the general background noise around me just feels muffled.

Can anyone tell me if compression settings are still hidden somewhere in the software so I might be able to point my audiologist in the right direction?

Similarly, can anyone tell me if the expanded EQ – I think it was 16 or 24 bands – is still available in the software? EQ wise, we’ve only been using the course-grained lows, mids, and highs.

But he tells me that Phonak has dumbed down the software quite a bit and doesn’t give him as many options as he used to have.

Phonak Target is very adjustable, can be confusing but yes, compression can be totally adjusted in Target.

Thanks, all. I appreciate the quick replies. I do have the 90’s, so there should be lots of flexibility with EQ bands from what you’re saying.

I really like this audiologist and at least want to give him a chance before I try someone else. Can someone at least give me some general guidance that I could pass on to him as to where to find the compression and fine-grained EQ settings in the software these days? He’s been doing this stuff for 20 years, and I got good reviews of him and his practice from others. So, I imagine this is just a case of me possibly needing to point him in the right direction because I have more demanding needs of my hearing aids than many of his other customers.

Fine Tuning: Gain and MPO Options for 3,6,10 or 20 adjustment bands. I’d just tell him you want to try something more linear. If he’s at a loss, ask that he call Phonak for assistance, but that should be a pretty straight forward request. 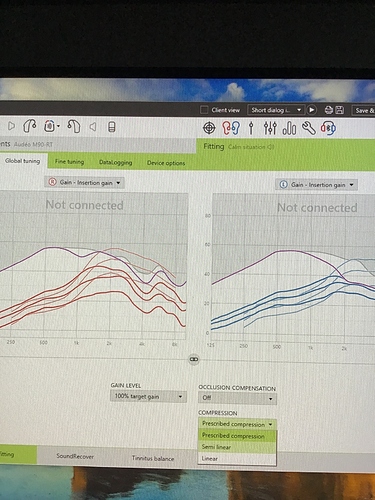 Global Tuning under initial fit.
Look for linear. This is a good start.