A lot, if not all, of the members are of the age to have hearing disabilities, that’s for sure. I watch very, very closely, but have been unable to detect any sign of HAs. Anyone know anything about this?

Anyone of any age can be hard of hearing or D/deaf. People need to get beyond only older folks potentially needing hearing aids. Politics has a lot to do with appearances so I doubt you’ll find anyone boldly/proudly wearing hearing aids. The average age of both current houses of Congress is below typical retirement age in the US.

The United States Senate consists of 100 members, two from each of the 50 states. Below is a list of U.S. senators in the 116th United States Congress. Professional and Financial Regulation Commissioner, ME

List of current members of the United States House of Representatives

I have worked around a bunch of politicians, if they wear hearing aids they are CIC aids.

At least two sitting presidents had HAs fitted (Reagan and Clinton), and one of them ran for reelection using them.

Reagan used his HAs, in fact the president wearing his Starkey was a key moment to public awareness on hearing aids. Clinton also used HAs while sitting as president. I guess George Bush (father) also used them (I don’t know if had them while being president).

When Reagan got the Starkey’s, it was a double edge sword for Starkey. There production went from about 1500/week to 6000/week. Their delivery time went from 1 week to about 6 weeks and their quality control went down the toilet. I was using quite a few Starkey back then and quit using them for a couple of years due to hearing aids arriving dead or quitting after a few days, it was strictly quality control issues.

Anyone of any age can be hard of hearing or D/deaf. People need to get beyond only older folks potentially needing hearing aids.

However, there is a positive correlation with age: 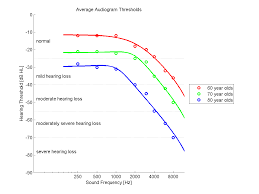 15 Insane Things That Correlate With Each Other

Why do these things correlate? These 15 correlations will blow your mind. (Is this headline sensationalist enough for you to click on it yet?)

Thanks, I needed that.