I just got the Costco Resound Preza and when I’m talking loud or projecting my voice (teacher here) I’m getting clicking noise. I want to be able to fullly utilize the features of the Preza. It honestly is like one of the features is turning on but I don’t know which one it is.
We’re added the music program that has most of the Advanced Features turned off and in Omni mode and I’m not noticing the clicking noise. But, I have no idea which Advance Feature it was.

I get a clicking noise in my right aid when playing music in the car too loudly and in the All Around program. My fitter turned Impulse Noise Reduction to off in that program, and it doesn’t occur as much. You might want to give that a try.

Like you, in the Music program I don’t hear the clicking.

It sounds to me as though you’re both overdriving your receivers and the membranes are slapping the soundbox.

What strength receivers are you wearing?

I have MP receivers. It has to be an advanced feature as it doesn’t happen in Music mode. Now I just have to figure out which feature is causing it.

Could it perhaps be aggressive noise suppression kicking in to limit a peak and creating the impression of a click?

How you hear this depends on how smart the system handles it. If it’s just a flat clipping, it’ll probably sound less natural and more distorted than a smarter compression approach. Whether it sounds like a click or not, I don’t really know. It’s also possible that at this point, the receiver may also gets overdriven as well and starts making a mechanical buzzing noise that signifies an overdriven saturation. Maybe if the duration of the peak is short enough, it may sound like a click. It’s hard to say.

If it’s not issue 2, and there’s nothing you can try to solve this problem by turning off something else on the hearing aid, and you don’t always want to be in Music mode all the times as a workaround, you may want to ask the Costco HIS to look up and see what the input dynamic range spec for the Preza is. Maybe it’s on the lower side (like around 85-90 dB SPL) and that’s just a limitation of that model. Maybe they have some other brands/models that has a higher input dynamic range (like >110 dB SPL) to try out that may solve this problem for you.

But keep in mind that your own voice spoken in a normal tone and not yelling shouldn’t be much louder than the 85-90 dB SPL anyway, unless you have to speak much louder because you’re a teacher in a noisy or big classroom. 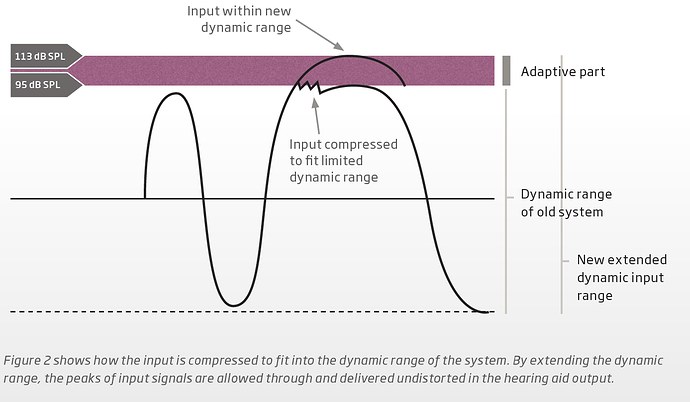 Update: so we’ve turned off the Impulse Noise Reduction. The “clicking” or activation noise/non-noise was still happening. Today, we increased my Uncomfortable Level to try to see if that will work. If it doesn’t, we will start to turn of the advanced features one by one. I want to figure this out as I just ordered the Jabra’s and will return these Peeza’s since I’m in the trial time period.

Did you got rid of the clicking noise? I’m experiencing the same with the Resound ONE. Impulse reduction is turned off and my audi and I are clueless of what the issue can be…

She think is some weird effect caused by the feedback suppression… But I don’t know.

I get the clicking with my own voice sometimes, as well with someone else’s voice. Especially whit sudden intensity changes.

I managed once to get the same clicking with a bell ringing in the distance.

So… Did you solve the issue? how?

I never got rid of the clicking noise. I moved to the Jabra pro (Costco’s One). We started with a brand new fitting, like an initial fitting. No clicking noise.

That said, I’m wondering if it was the fact that we set the noise suppression speed to activate quickly. I honestly don’t remember what the feedback setting was.
My advice is to start from scratch. I’ve actually had no problems since we did that.

Well, that’s sad… I really wanted these hearing aids to work properly… But that clicking noise is so weird and unnatural that it is a deal breaker for me. I hope I can fix it. I’ll keep you guys updated on my thread: They offered me a Phonak P90 or a GN Resound ONE. Is this a good deal?

These clicking noises are almost certainly caused by clipping and I suggest increasing the MPO level (which is a setting in the fitting software). It will be a very transitory increase above your maximum comfortable level and less objectionable than the clicking sound.

MPO is maximum output power by the way.

Well, thank you David for your reply! I did try today several settings with my audiologist, and sadly, increasing the MPO settings did not eliminate the sudden clicking noise.

I wear 100dB receivers and am at 100% of my prescriptive target. I’ve found that if there is the slightest bit of back pressure on the receiver caused by even partially clogged wax cups, I’ll get that clicking sound.

Have you tried fresh wax cups/filters?

I had this issue with Resound Quattros and like the OP it didn’t happen when in Music mode. So it was an advanced feature that was causing the issue. In my case changing Time Constants from syllabic to slow solved the problem. Your mileage may vary as changing this setting may affect how quickly your aids adapt in noisy situations.