Thanks. You just made me look the business card and yes the card mentioned so.

Good luck with your next appointment!

My suggestion would be to send an e-mail to Costco Canada via their “Ask a Question” system. Identify the store, the fitter, and the concerns you had about misinformation. I’m sure Costco would want to know about an employee giving out bad information, and making claims that their premier hearing aid product, the Kirkland Signature 9.0 is not available, and especially being told to buy a hearing aid elsewhere.

I believe the Phonak branded product they offer is the Brio 3. I wonder if you were given one of those that happened to be in a M70 box?

With respect to power, typically all brands come in 4 power levels from standard to ultra power. This includes the Rexton and KS9. When I look at your loss in the Rexton software the M receiver is a bit under powered, but should have lots of power with a P receiver. Here is what the gains look like with a Rexton P receiver, and NAL-NL2 prescription formula, and closed click sleeves. 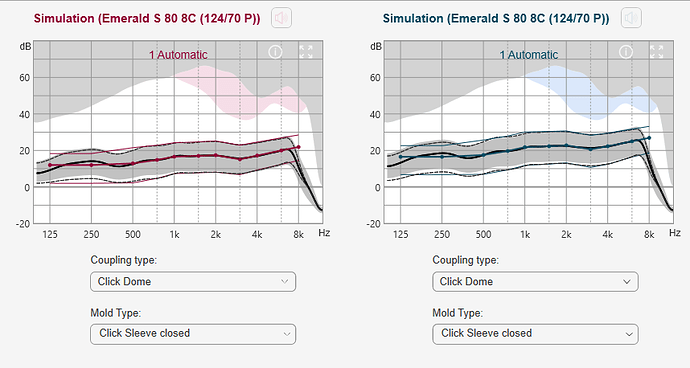 Your right ear should be OK with respect to feedback, but the left ear may be a bit of an issue as you only have about a 5 dB margin between the soft sound gain and the blue shaded feedback potential area. If you decide to go ahead with an aid, I would try it first with a closed sleeve, and if it does not work out for you, then have them order a custom mold for the left ear. You can get your money back for the mold if it is not to your liking. They will remake it also based on how it works for you.

I would tell them ahead of time that you want to try an aid with the REM done, and if it is a Rexton with the own voice processing turned on. It really does not take that much time, and you are correct that if they do not do it, you will not know how the hearing aid is going to sound to you. Now if you want to try multiple aids, then the time will start to become an issue. You may need to do it in a couple of appointments.

Oh, and in general, lower level, and lower priced hearing aids do not cut back on power. They most often just have fewer bells and whistles.

Hope that helps some.

Thanks Sierra. Actually, both box and target software showed Phonak M70. Also, she mentioned the same “Costco stopped selling aids marked with Kirkland and now selling Phonak the medium level, Rexton, Philips).
My appointment with other Costco branch changed to be Tuesday.
Re the power, yes am sure you’re right. I had the Oticon OPN with P and was good (except then feedback). Am on trial (which will end soon )with Marvel M90 and have 3M for both ears. I think these are the power for the Marvel!. I hope this appointment goes well

For what it’s worth (if this helps anyone), learned after 28 years of purchasing hearing aids, I MUST HAVE EAR MOLD (NOT SPEAKER) IN EACH EAR attached to quality behind-the-ear hearing aids.

Wax in ear seems to plug up speakers. Easy to keep ear mold from getting wax; HARD TO KEEP WAX FROM GETTING INTO SPEAKER…if speaker in ear.

I also had a very unpleasant experience with a Costco Hearing Centre in Ontario recently. Which Costco store (location) did you visit?
BTW, what’s the Costco price for a pair of Phonak Marvel M70 HAs?

I understand price point may be the reason people would seek Cost Co for hearing aids. However for something so vital, isn’t it worth a few bucks more to visit a true professional? I had a bad experience when I received my first hearing aid in 2015 at one of those strip mall - chain store hearing aid retailers. Never again.

The thing is that it depends more on the person than the license or the certification. There are hearing aid specialists that are more proficient than some audiologists and vice versa.

However for something so vital, isn’t it worth a few bucks more to visit a true professional?

Consumer Reports did a survey of about 17,000 members a couple of years ago and with the results of the survey did a rating on the various larger hearing aid retailers. They came out in this order from best to worst:

However for something so vital, isn’t it worth a few bucks more to visit a true professional?

I thought that when I first started looking into hearing aids and avoided Costco. (My mother drummed “You get what you pay for” into my head for years.) Then my first exploratory adventure at a private audiologist resulted in a trial of aids that did nothing for me and were priced at $7,000, which was double what I could pay. When I mentioned my hearing problems to my regular doctor, he told me to go Costco. He said of his patients who wear aids and are satisfied with them, almost all are Costco customers.

So that’s where I went and had satisfactory aids for 4 years and am now trialing their KS9s.

tribalrose - I visited a CostCo today. I stood at the counter for 20 minutes before I was even recognized or acknowledged. I didn’t have an appt, didn’t see any other customers in the area and all the audio test booths were empty.

I was told the Phonak Audeo Marvel 90s were not available but introduced me to Kirkland Signature 9.0 Premium. I was told these are made by Phonak.

I would be curious to hear your feedback your new devices.

tribalrose - I visited a CostCo today. I stood at the counter for 20 minutes before I was even recognized or acknowledged. I didn’t have an appt, didn’t see any other customers in the area and all the audio test booths were empty.

Hi orgullodemexico - Does your screen name mean you’re in Mexico? I ask because any experience I have is in Colorado, and since it seems things are different in UK and Canada, I assume they may also be in Mexico. Also I’ve never gone to the hearing department except with an appointment, and I have had to wait as much as 15-20 minutes past my appointment time once or twice. The audiologist at my Costco is very deliberate and I doubt if anything short of a fire would make her hurry, so if the person ahead of me needs extra time, they get it, which of course means the same for me.

I hope nothing I posted made you think Costco has the Phonak Marvels. The references in some threads that make it sound as if the KS9s are some kind of Marvels are unnecessarily confusing IMO. Both are made by Phonak and are similar, based on the same Phonak technology, but they are different aids and the Marvels have a lot of features that justify their higher price. The KS9s are a great aid for the price. Only you know if you can pay the premium for the Marvels and if those extra features are worth it to you.

Anyway, I’m sorry you got ignored for 20 minutes and hope that’s not a sign that the particular Costco you went to has a less than sterling hearing aid department. It does seem, not just with Costco, but with all hearing aid sellers, the big thing is a knowledgeable and caring fitter.

As to my aids - I’m so delighted with the phone thing (Android phone) it probably shades my opinion of everything about the KS9s. Some posters here say the person on the other end of the line doesn’t hear your voice well, but I’ve asked and asked people I’ve called or who have called me, and every one says they hear me fine.

My previous (and first) aids required a necklace with medallion for Bluetooth for phone calls and to connect via the tv device, and I came to dislike the thing more and more as time passed. Clumsy, ugly, finicky to connect, which means I REALLY love the way the KS9s do phone calls.

Other than that, I’m hearing better, not a lot, but noticeably. I do a lot of dog training and competition and those kind of events are always held in venues that aren’t great for aids. Big, high-ceilinged places that echo and have noisy fans and heating. Instructors and judges are always a distance away. The first week I had the KS9s, an instructor remarked to me that I seemed to be hearing better - I was acknowledging her when she spoke to me the first time, not the third.

The KS9s feel very light and “not there” compared to my previous aids, and that means I’m wearing them longer hours, far more inclined to put them on when I first get up rather than waiting until I need to go somewhere. I always know when I have the Trax on, but I’ve fallen asleep with the KS9s several times and when I woke not realized right away.

I’ve had a chronic problem with the aids backing out of my ear. I often wouldn’t notice until I realized I wasn’t hearing well and pushed them back in place. Custom molds helped that problem but didn’t eliminate it. The KS9s stay in place wonderfully with the small power domes I have now. The audiologist thinks it’s because the receivers have a sight curve to them. Whatever it is, they’re eliminating that small aggravation.

I can’t pretend it’s magic. If you look at my audiogram, you’ll see I have a flat loss. My big problem was with low, grumbly kind of voices and still is. Whether that’s better or not I can’t say. It’s not just fixed.

There is a thread here on the KS9 that is well over 1000 posts long.

I’m not in Mexico - Chicago.

I hope my experience isn’t an indication of Costco in general - but you know what they say about first impressions.

Thanks for all the feedback about your device. I haven’t made my mind up as to what direction I will go.

My wife and I have gone to the Costco in San Antonio. My one time with an appointment was a no wait at all visit. My wife has similar results.
We have had nothing but admiration for the service with this Costco hearing department. Hands down the best service I have had concerning hearing aids.

I was so unlucky and cancelled my appointment .Tuesday morning I had a sudden unbearable pain which resulted to be hospitalized and a surgery to remove my gallbladder and just went home . Will start cycle of appointment again

@orgullodemexico, I had a similar experience at Costco. I stood at the counter to try to get info about their appointment process, and I was ignored. It didn’t leave me with a very good impression, so I took my business elsewhere–to an audiologist in private practice, even though it costs more. However, there are many on this Forum who will not buy hearing aids anywhere but Costco. It just goes to show that we all have different opinions on what is excellent “patient/customer service,” and what we’re willing to pay for it. Good luck with your hearing aid purchase.

Tuesday morning I had a sudden unbearable pain which resulted to be hospitalized and a surgery to remove my gallbladder and just went home .

Ouch! An appointment wait will at least give you some time to recover…

Sorry to hear that. Obviously you have a new priority on hand. I wish you a speedy recovery.