Will hearing aids help me much?

I have high frequency loss but feel like I hear pretty good. My wife might say otherwise though, and I guess I do say what a lot. Has anyone with this type of loss tried hearing aids and could you tell much of a difference? I appreciate any input.

So looking at your loss I’d say you have pretty significant loss in the upper range and yes there are many aids that will help.

That’s exactly what I told my wife.
She insisted I try them.
Like always she was right.

Once you get accustomed to wearing them, you will find you can’t do without them. If I have to take my HAs out in the middle of the day, I feel broken. Give them a shot.

My loss was similar to yours until recently when the my left ear worsened. I have worn hearing aids for 20 years now and can’t enjoy my day without them.

I always felt my loss was not too bad because my speech recognition scores were high. The recognition test is given in a sound proof booth, but once I’m in a public venue or even an intimate family setting my ability to understand speech declines exponentially.

Why not try Costco for a 6 month trial of a pair of their hearing aids…Good Luck.

Yes absolutely they will help, you should be using HAs, you have mild to severe loss in the higher frequencys, a typical ski slope loss.
HAs will help you tremendously.
See the speech banana to see what your missing.
Costco is a good start if you have one near by. 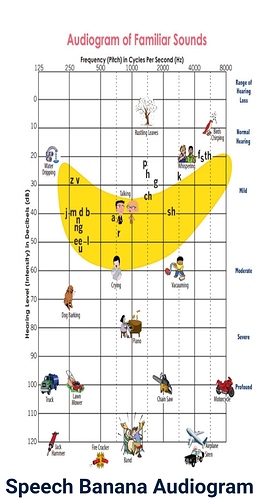 @MTSU, yours is a classic case where a spouse or close co-worker notices a hearing loss before you do. Postponing getting hearing aids risks your brain shutting down its ability to hear sounds in the lost frequency range. Please try out hearing aids and if you don’t like the way they sound return to the audiologist for adjustments or try different HAs. All of us here have gone through this process. It’s worth the effort. Good luck.

We all think we hear pretty good until people start making comments. The person with the loss is usually the last to know

I appreciate everyone’s comments. I told the audiologist to order the hearing aids for me to try. She did tell me I might have to come back a few to times early on for adjustments so I’m hopeful I can get accustomed to them. They are Phonak Paradise 70. She indicated they have a feature that will help with some of the tinnitus which I have.

The tinnitus feature on my p90s hasn’t been “amazing” but a light help when tinnitus isn’t raging and I’m in a quiet place. When it rages, I use some form of sound from either an app on my phone or one of several devices that have recordings in them of various sounds which help. I posted in the tinnitus section of the forums here a workbook from a course I took which might help you. It has a resources guide, I think, in the back where you can get ideas.

FYI - as has been noted, if you have a costco nearby the ks10 model is the same as the phonak p90 for about a quarter the price…

The tinnitus feature on my p90s hasn’t been “amazing”

Yeah I noticed this, in fact Phonak haven’t put much work into it, if compared to Signia, Widex Zen or, ReSound tinnitus controllers they are light years away, the options available/offered are far superior.

You hear “pretty well” in quiet environment, with a good lip reading technique. The problem is a large group of people. Correct? The biggest challenge is to navigate through the noise. You have loss in high frequency, that means you lose most of the consonants. You hear vowels (low frequency), but without consonants speech has no sense. You hear people talk but you can not understand. I would suggest Resound or Starkey because they have the best feedback management which is important for your steeply sloping SNHL.

Costco Hearing Aids have less features to reduce the client-service time. Now Phonak is not happy how Costco distributes Phonak hearing aids and unblocked it. Today every single private clinic can adjust Phonak Hearing aids. Hearing loss is overly complex, and it requires time and effort working with a practitioner to get the right fit, the right program, the right wearing schedule and learning curve to overcome years of auditory, linguistic and cognitive withdrawal. Your success depends on the treatment and rehabilitation process, not on the hearing aids themselves

Can you name them, as far as I can tell only the tinnitus features they won’t do, they do pretty much the rest.

Your source for this comment? I think Phonak would be very happy with the volume of sales going through Costco.

But hasn’t that always been the case, or are you referring to the rebranded models?

Which is why at Costco you can have as many appointments as you want. The aids are exactly the same as their partner high end brands with only one exception - they will not program the tinnitus features, however those features are still available on those hearing aids.

I would imagine that if phonak was not happy they wouldn’t sell them their top of the line model to be branded as their kirkland hearing aids. No one forces them to do that. Phonak has provided their aids for the ks9 and ks10. Jabra and resound one are the same - both owned by gn. Philips is the same company as oticon but not the same aid - it’s specific for costco.

When I went to a private audi I got the same line - ‘costco aids are older, fewer features, etc…’ And I walked away from them not due to that (although it was wrong) but lack of effective service.

If you are going to make blanket statements about a company it makes sense to also post verifiable evidence. Just sayin…

Your comments make me think you don’t want to wear hearing aids, for whatever reason. So there may be more to this. Being hard i
If hearing is not hearing is nothing to be ashamed of. But if you don’t try them and give them time for you to adjust then it’s going to be a failure and you’re going to go around for the rest of your life saying I tried them and they suck. The person closest to you the person who cares about you the most has commented about the fact you are struggling. Which is usually how it works. It’s always the eventual wearer who questions whether you need them or not. That’s because you have adapted to your loss and now assume that that’s normal hearing. You admit yourself you say what a lot. But if you don’t try different aids with a positive attitude then you’re setting yourself up for failure. If you won’t do it for yourself do it for your wife. She’s probably getting frustrated talking to a wall

Like others have said. You have a significant loss, not just high frequency. It’s time to face reality and go into this with a more positive attitude. I think the average person goes 5 to 7 years before getting their first pair of hearing aids and admitting they have a loss. But every one around that person knows you can’t hear. Hearing aids are not just for old people. By not getting aids you are lowering your quality of life and the quality of life of those around you. I strongly recommend you take a positive step in the right direction with the right attitude. Otherwise you’re just wasting your time.

The main purpose of hearing aids is to help people with hearing loss to manage the environment noise. Less features = less ability to help. However, all that features become useless with poor fitted hearing aids and no REM verifications