Will Costco upgrade my KS9 to KS9 Telecoil?

Found at Costco or online? Assuming Costco can get one, I would think Costco would be much easier to deal with if you had any problems. It’s my understanding that PartnerMic should work directly with your HA. Might need something set up in Target. Don’t know.

The Part about it having a dedicated Phoack Ferquency …is the part that makes me think it wont work with HS9S…valid concern or not ?

I’ve had the PartnerMic for a month and I like it a lot, enough to buy a second one since the battery charge lasts only about six hours. The things I don’t like are (1) its range which is 1-2 rooms in a building and 25 yards in open space, and (2) it generates a chime every time the wearer goes in or out of range which can be annoyingly frequent if the wearer is on the edge of the range. It uses a dedicated Phonak frequency, not Bluetooth so it doesn’t take up one of the HA’s two allowable Bt pairings. It has to have its own program, which, optionally, can also get limited input from the acoustical mic if you want it - I find it somewhat useful in group situations but the PM definitely works best for the wearer’s voice. Its program(s) must be set up by your hearing aid vendor; once set up your HAs automatically switch to it when the PM is powered on - a nice feature. Write if you have more questions. see less

The Part about it having a dedicated Phoack Ferquency …is the part that makes me think it wont work with HS9S…valid concern or not ?

Your HAs got recently firmware update which enables this phonak roger hardware and why I keep saying you also need receivers / license / key, call it as you wish.

About pen 1.1 range, just tested for you. Me 2m apart from person talking (that’s 6+ feet) with fan between us directing towards that person, sound comes to my ear loud and clear. Closer, evem better.
In ‘interview’ mode.

But for further away I think this fan killed the target sound from person speaking.

Laid down mode wasn’t that good. For mode when it hangs around the neck, it had to be really close, so that could be 6 inches.

This is from the Brio4 info, but it supports that Costco should sell PartnerMic (look under Accessories) Costco Phonak Brio 4 (Product Information)

The PartnerMic from Amazon should work but I personally would much rather deal with Costco. They may need some nudging but you should be able to get one, and if you don’t like it, you just take it back. Regarding the “dedicated Phonak Frequency,” that’s just their proprietary system. KS9 with recent firmware update should work fine. 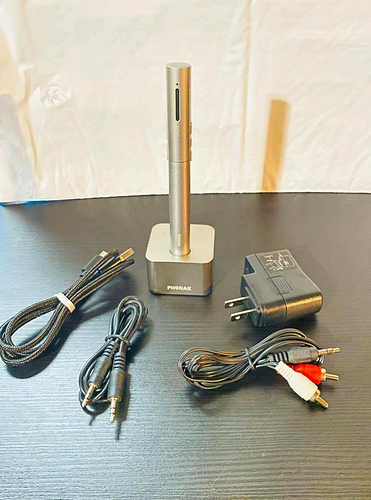 For that price I’ll try the pen first

I canceled the purchase

They will connect directly to the hearing aids, but you either need a Roger iN device (pen or select) Those come with the “receivers” built in and you transfer them to the hearing aids or you need Roger X receivers and those get transferred electronically to hearing aids. The PartnerMic does not need this (nor is as advanced as Roger devices) 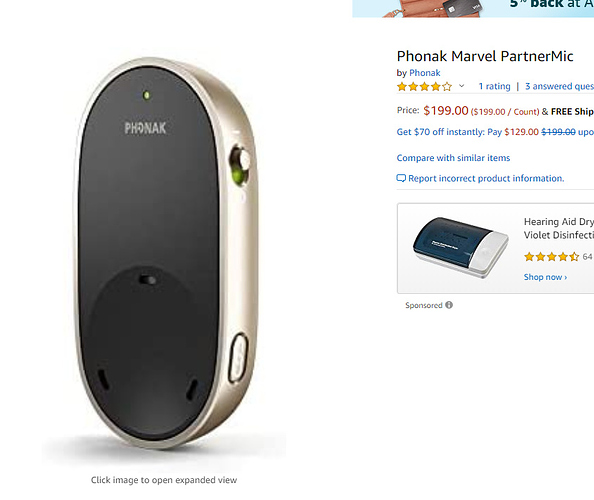 I have a feeling you will really like the PartnerMic in your Uber vehicle.
Please share your thoughts on it later.

BTW…this is the barrier I made …

Curious how you know that Costco’s price would be so high? They’re TV Connect is only $100 I believe.

It’s “okay” 3 out 5 stars if you will. I have it a foot from the passengers in the rear of the car .If they are speaking directly towards it then voices come through well but tinny … like AM VS FM radio.

For $200 I was expecting far better. It is coming in handy but audio pick up quality is lacking.

I will keep looking for Bluetooth mics but until I find something better this will work.

It’s “okay” 3 out 5 stars if you will. I have it a foot from the passengers in the rear of the car .If they are speaking directly towards it then voices come through well but tinny … like AM VS FM radio.

This may be adjusted in the Target software.
Are you getting outside noise or just the person speaking?
The tinny can be adjusted.

Voices have a hallow sound if that makes sense …

Software for the Mic? or Hearing aids?

The changes would be in the hearing aids Bluetooth+mic program in Target I believe.

BT are for streaming (2x automatically) plus bt for calls.

@Danny_Mac
But, partnermic is supposed to be worn as lapel mic, so below the mouth on the shirt.
Test it like that and then judge. I’d be interested to hear the verdict, since I don’t have that device.

I’m not surprised that it doesn’t work out for you as you wanted since it’s not what it was designed for.

I think it uses directional mics, to be used as described. I’m not sure about that.
What I am sure is that it makes no financial sense for phonak to give for 200 what it sells for 1000+

I am surprised that even in different usage it picks up something that you can work with.

However I feel for you, those gadgets are expensive and it definitely makes sense to try with least expensive one. If you don’t see the benefit, maybe return it?

If you’re in the USA, go to ebay, pick the seller with 100% good feedback, buy pen and 2x roger x receiver (unless you find pen iN version, I haven’t), go to your fitter to transfer the ‘licences’ from the x receivers to your HAs, pair HAs with pen and test that.