Which country are hearing aids manufactured in?

I would love to see a brand by brand breakdown of where hearing aids are manufactured. If anyone has any knowledge on this, please share. My assumption is that most are manf’d in China and elsewhere in Asia.

As in cars, this may be only Final Assembly.

I suspect this may be a futile study. Unlike ships or cars, an aid factory is small and lightweight. Assembly operations are often sub-contracted, so may move when contracts expire; or when the contractor gets another job and wants to re-allocate his several operations. You might even find that all the Big Six end up being made in the same various subcontractors.

Receivers and mikes were historically Knowles in IndXXXX Illinois. They have asian operations, and I have found at least two other companies supplying very similar components, Denmark and Aisian?

The “chip” is a key brand-part but I can’t imagine all the Big Six together can fill six wafers a year. And it is not leading-edge Silicon technology- core speed is set by power consumption which is a thousand times smaller than a slow cell-phone brain. I could picture a fab from 1999 with a stepper from 2005 doing this work, and that again is commodity manufacturing.

There are shell-shops all over but most RIC/BTE and ITE Faceplate production is in Asia near Knowles and other transducer facilities. Significantly in Souzho China, but there are a few significant other factories elsewhere in SE Asia like Malaysia (Oticon?) There was also a Starkey facility in Mexico.

Knowles is based in Itasca Illinois and the surrounding area. Most of the original centres had production facilities associated with them; originally for manufacture, then pre-production R+D lines. Any volume product would quickly get migrated to a SE Asia assembly line. Though they might be prototyping out there now too.

And it is not leading-edge Silicon technology- core speed is set by power consumption which is a thousand times smaller than a slow cell-phone brain. I could picture a fab from 1999 with a stepper from 2005 doing this work, and that again is commodity manufacturing.

I visited Phonak’s plant in Switzerland where they manufacture the first-run and refine the process before moving to Asia. It seemed ridiculously modern to me, but I am not at all familiar with the state of the art in processor manufacturing. I know a few people down the road in Austin that know all about it though.

My Sound World Solution Companion hearing aids are made in Korea.
I have been waiting 4-5 years for something better.

I think GN is manf’s RICs/BTEs / ITE boards in China and customs in MN. With the exception of VA products which have a US-manf mandate.

I guess this proves that the Phonak Audeo M-xxR housings are made in Vietnam. 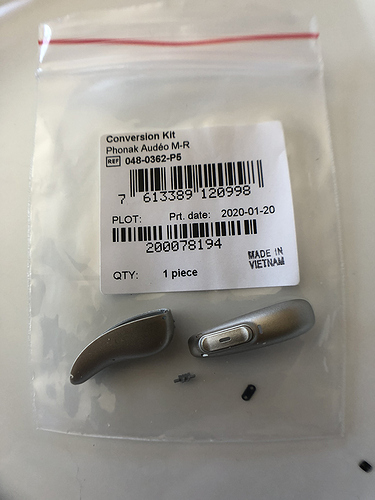