One of my pet peeves about business travel is the very high noise in restaurants. Good article on why these establishments are so noisy. They should add Starbucks to the list as well. At least with HA’s I can turn the volume down.

Here is the article without having to go to the link:

Pass the Salt … and a Megaphone

La Mar Cebicheria Peruana, a 16-month-old restaurant in San Francisco, hits every fashionable trend in restaurant design. The 300-seater occupies an 11,000 square-foot loft space in a historic converted ferry building. The floors are hardwood, the ceiling beams exposed, and the wood tables bare. It has an open kitchen and a large bar. A wall of windows overlooks the bay.
The result: It is the ultimate noise trap.
Many of the most cutting-edge, design conscious restaurants are introducing a new level of noise to today’s already voluble restaurant scene. The new noisemakers: Restaurants housed in cavernous spaces with wood floors, linen-free tables, high ceilings and lots of windows—all of which cause sound to ricochet around what are essentially hard-surfaced echo chambers.
Dining-Room Clatter

Upscale restaurants have done away with carpeting, heavy curtains, tablecloths, and plush banquettes gradually over the decade, and then at a faster pace during the recession, saying such touches telegraph a fine-dining message out of sync with today’s cost-conscious, informal diner. Those features, though, were also sound absorbing.
Even as restaurants are ditching style elements that squelch sound, they are bringing in more sources of noise: Open kitchens, lively bar scenes and disc jockeys and iPods programmed with the latest rock music. Loud music can make diners talk louder—which ups the volume even more.
Before designing L20 in Chicago in 2008, a restaurant where the least expensive meal is a $110 four-course menu, architect Dirk Denison knew noise would be an issue because the space was “a big square box—the worst scenario,” Mr. Denison says. Parallel walls cause noise to ping back and forth. Then chef Laurent Gras insisted upon no tablecloths and several members on the restaurant team resisted the idea of carpeting. Mr. Gras also wanted his friend, a New York disc jockey, to program the restaurant’s iPod with electronic music.
How Loud Is It?

Mr. Denison, who had never designed a restaurant before, set to work. He laid down carpeting—and convinced Mr. Gras and others to accept it—and put a porous, acoustical plaster on some parts of the ceiling. The disc jockey music stayed, but it was carefully designed to exclude lyrics, which can interfere with conversation, and all tracks contain fewer than 100 beats per minute, so it isn’t too energetic. The restaurant now feels lively but not noisy, Mr. Denison says.
The best way to absorb reverberant noise is to cover at least two perpendicular surfaces with sound-absorbing material. If, for example, both the ceiling and one wall are treated with acoustical tiling, sound waves cannot bounce back and forth both horizontally and vertically.
A good acoustical engineer aims to create a sound level that allows people to hear each other, but doesn’t make it so quiet that parties at other tables can overhear. That said, many restaurateurs often fail to consult with acoustical experts during the design process because of the cost, because the right look is paramount to them or because they believe that their customers actually enjoy the noise.
Dinner Without Yelling 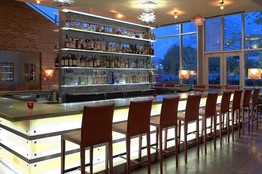 <cite>Eric Laignel</cite> Glass walls and hardwood floors contribute to the noisiness at the Grove restaurant in Houston. 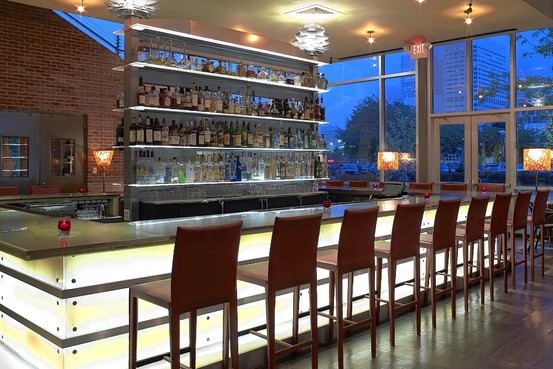 Tony May ran San Domenico, a formal, high-end Italian restaurant in New York City for 20 years before closing it in 2008. Last year, he opened a new version, SD26 in a new location. He did away with the acoustical tile in the ceiling that he had used at his old place, and left the new 22-foot, gold-leaf adorned ceiling untreated. The restaurant is louder, Mr. May says.
“I don’t think of it as noise. It’s excitement. The new consumer is looking for energy, a good vibe,” Mr. May says.
David Myers, the chef and owner of Comme Ça in Los Angeles, recently hired a company to install acoustical panels on the ceiling to quiet a restaurant that was so noisy that “I had friends who didn’t want to come back because it was so loud,” Mr. Myers says.
When the restaurant was designed in 2007, Mr. Myers didn’t have a budget for hidden acoustical treatments. He also didn’t want carpet—“it depicts a fine-dining experience, and this is a brasserie,” he says.
Restaurateurs often say the only complaints they get about noise are from older clientele. As people age—and particularly when they are 65 or older—they often lose acuity in hearing high-frequency sounds, making it harder to understand speech, says Mark Ross, a professor emeritus of audiology at the University of Connecticut.
Low-frequency sounds, which include background hubbub and the thumping sound of a loud bass playing on a stereo, tend to be deeply annoying, says Chicago-based audiologist and acoustical engineer Tom Thunder. The evolutionary explanation is that many of primitive man’s biggest worries—a lion’s roar, thundershowers, or the rumbling of a volcano—transmit low-frequency sounds, Mr. Thunder says.
But even some younger diners are irked. Danielle Stillman, 23, says she spent $70 on a graduation dinner for a friend at The Grove in Houston about six months ago. The goal of the meal was to catch up after not seeing each other for a while, but Ms. Stillman could barely hear her friend speak, she says.
“I want to have a conversation without having to scream ‘what?’ at the top of my lungs,” says Ms. Stillman, an energy analyst.
The Grove, in a new building with glass walls and hardwood floors, has acoustical bunting layered behind boards in the wood ceiling, says partner Robert Del Grande. There is also a quieter room with carpeting. Nevertheless, when the restaurant is full, it can get loud, he says.
View Full Image 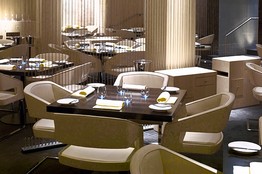 <cite>Shimon and Tammar</cite> L20 in Chicago added carpeting and incorporated acoustical plaster in the ceiling to combat sounds. 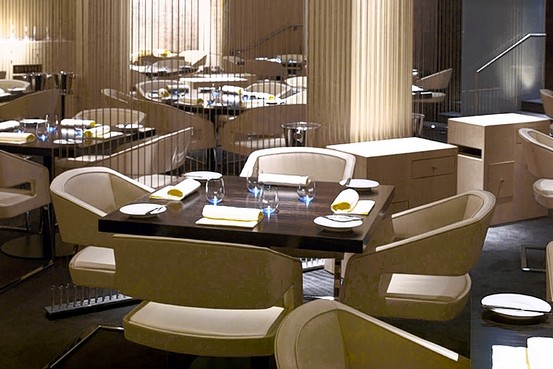 In recent years, rock music—even loud rock music—has made inroads into upscale restaurants. Celebrity chef Mario Batali famously blares Radiohead and Guns N’ Roses at his flagship Babbo in New York City. Wolfgang Puck, the celebrity chef behind Spago in Beverly Hills, ditched light jazz and began playing Led Zeppelin, Pink Floyd and the Who at several of his fine dining restaurants in the last couple of years.
Familiar rock music “relaxes people,” says Top Kaplan, senior managing partner of Wolfgang Puck Fine Dining Group. “They get nervous going to a higher end restaurant, but they know they can relate” to familiar tunes, Mr. Kaplan says.
Diners worried they will end up in a noisy restaurant may want to play defense with a few strategies. Googling pictures of the restaurant can be helpful: Walls of windows, high ceilings, boxy dimensions, a surfeit of hard lines and a dearth of soft materials should raise red flags. Call the restaurant and ask if it has acoustical paneling or other sound-reducing materials. Take note: If they say they have carpeting, that’s often not enough, says Marshall Long, an acoustical engineer in Sherman Oaks, Calif. Restaurants rarely lay down carpet more than one-inch thick, the minimum for effective noise control, he says.
Once in a noisy restaurant, seek out tables in alcoves or side rooms, which can barricade or at least deflect noise, Mr. Thunder says. Convincing management to turn down the music is a double boon: The music itself gets softer, and then other diners lower their voices because they are no longer competing with the music.
The staff of La Mar in San Francisco realized noise was a problem immediately after opening, says general manager Andrew Generalao. It was a “low priority,” Mr. Generalao says, until a local reviewer printed that the decibel level was 80—just under the level audiologists consider damaging to hearing after long-term exposure.
In March, La Mar spent $20,000 tiling the ceiling with acoustical tile, which effectively dulled the roar, Mr. Generalao says.
Write to Katy McLaughlin at katy.mclaughlin@wsj.com

I don’t wear hearing aids and don’t have loss. I will never go in a Cheddars again. It was so loud I ate as quickly as possible and left. good Riddance. I feel sorry for folks with H.A. as no Hearing aid in the world could have helped in there. It is best described as literally nauseatingly loud.