I have Costco Hearing Aids Kirkland Signature 7.0. I’ve had them adjusted multiple times in the 5 months I’ve had them. Is there anything that can be done about the high frequency noise I pickup from some TV’s, electronic organs etc. If the sound on the TV is turned off, the squeaking noise goes away. It is not all TV’s and all TV’s don’t have the same interlacing. Are all hearing aids going to do this when around (I’m guessing) older TV’s! It drives me nutz!

Whenever you experience something uncomfortable with hearing aids in most cases there are things that can be adjusted. With that said there are multiple things that could be causing what you are experiencing. Would you describe the high frequency noise as a static sound, a “shhhhhhhh” sound, or a feedback squeal? Also, what type of loss do you have (high frequency) and what type of ear piece are you using (dome/mold, etc…)?

Dome/no mold. The sound is a chirping sound not feedback squeal or a static sound and it goes away when you turn the sound off the TV. This seems to happen with older TV’s - maybe the interlacing frequency? I do have high frequency hearing loss.

I get the occasional momentary flash of feedback when listening to TV. I think it is linked to certain frequencies or sound effects. After reading the forums, I have come to the understanding that they can do a feedback test to find the causing frequency and tweek your HAs from there.

I have not done this with my current aids since I am planning on getting new ones.

Alot of times we categorize “chirping” as feedback. The reason it’s different from the squealing that we normally attribute to feedback is because modern feedback suppression cancels most of the sustained sound resulting in a “chirp”. Running a feedback test would help identify if this is the case. It’s also possible that you might need a dome modification. In all cases your hearing health professional can help you determine what exactly is going on.

I am currently using 4 mm open domes. I’ve tried 8 open in one, closed in the other, and 6 open in one and closed in the other. (this was because one ear is much worse than the other.) The larger domes would not stay in. I was forever pushing them back in. I’m told I have very small ear canals. The 4 mm does stay in but is only available in open. (They say that isn’t a problem???) I will request a feedback test. I am assuming it is something other than holding a hand over your ear. When that happens I do get the squealing - even if it is not tight over my ear. I am wondering what happens when it is necessary to wear something over my ears because I do live in Minnesota! The hearing tech has adjusted down the high frequencies already (more than once). Do you mean something other than a different dome size by dome modification?

You should share your audiogram on your profile so it’s easier to understand how bad your loss is on each ear and may give better clues on what kind of problem you’re having. You only said you have high frequency loss and that one ear is worse than the other with giving any more details at all. So it’s really hard for folks to give good inputs if they don’t even know what kind of loss you’re dealing with.

If I had to guess and take your word that it’s not feedback, I would guess that what you call “chirping” on old TV sound is most likely high frequency overdrive to the point of saturation/distortion from your receiver. This is more likely if your high frequency loss is severe (again no audiogram means no good clue given so the guess is only as good as the clue which is simply HF loss), and you have a receiver not able to amplify the HF enough for your loss, so it’s over-amplified and driven to its limit, resulting in the saturation/distortion.clipped sound.

This is at least my own personal experience where I have pretty severe HF loss in my right ear (in the 85dB loss and up), and when I had 85dB receivers, I hear saturation/distortion sound from my Bose Sound Dock 10 which is not an old TV speaker, but Bose speakers tend to over emphasize HF sounds. I had to have the audi reduce the HF amplification by a bit in the 4KHz-8KHz range (by 4 to 5 dB) before the saturation sound is gone. I’m guessing this is what you heard and call “chirping” yourself. Later I upgraded to 105dB receivers and I didn’t have to reduce the HF amplification and I no longer hear this saturation issue, because the 105dB receivers are not driven to its limit like my old 85dB receivers were.

You said you already had your Costco HIS adjust down the HF amplification more than once already, but still no luck. But maybe they didn’t adjust it far down enough to prevent the overdrive. Again, without knowing the details like your level of loss, what size receiver you wear, and how much amplification was reduced at which frequencies, it’d be all a guess. And for this adjustment to work, the HIS would have to make the right guess at how much to decrease at which resonant frequencies where this happens to eliminate it -> many different rounds of adjustment trials and errors.

It doesn’t happen on all TVs because maybe some TVs don’t over smplify the HFs and other TVs and your electronic organs do. It’s hard to say.

4-5mm closed domes are available on the Sonova range. Oticon do a 6mm dome.

It sounds like a very basic feedback issue which ought to have been resolved.

Thanks for all your answers.
Here is the latest audiogram. Hope it is clear enough to see. I looked on my information I received from Costco, and other than the brand and model, I do not know what receivers I am using. 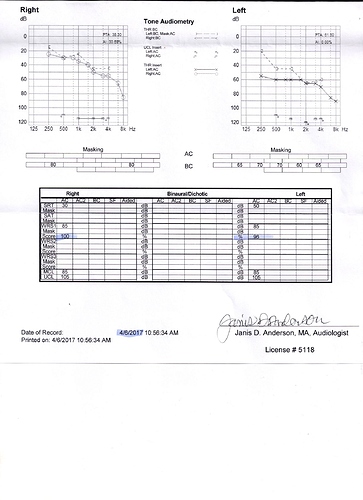