Target thinks my vent is odd

Trying to fit my custom molds on my Phonak Audéo M90’s, I ran into a small snag: It won’t estimate the vent for the left side. 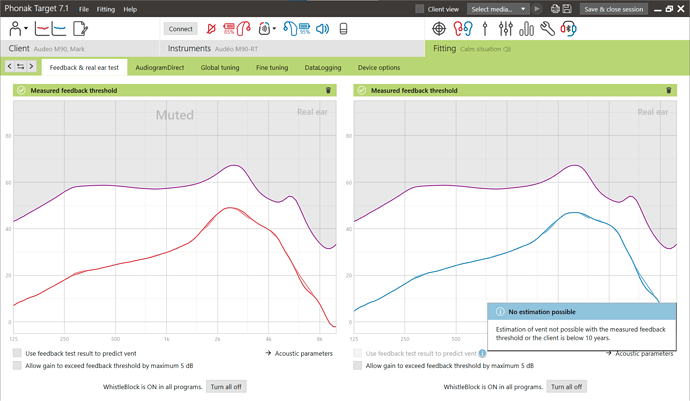 I’ve tried decoupling the HA’s within Acoustic Parameters, changed from SlimTip to Cshell, but nothing so far. Does anyone what this odd response depends on? How to get rid of it? Other than setting it back to power dome where it functioned.

Is there a better choice for custom molds? I’ve always taken the Acoustic Code field as optional. Has that changed?

How have you set the aids up?
It appears gain is being pushed where Target doesn’t like it.

Nothing sophisticated while starting.
I have specified my audiogram.
I had specified the acoustics with small power domes and 2P receivers, did a feedback check to get the vent estimate and then an AudiogramDirect. Everything went as it should.
Then I switched the power domes out for the custom molds and specified occluded SlimTips. Now the feedback check couldn’t estimate a vent. Tried occluded cShells: No vent estimation. Tried specifying a small vent (0.9-1.2): No vent estimation.
That’s when I posted. Because it’s odd. I never ran into this before. I skipped it for now and just went ahead with the AudiogramDirect while specifiying an occluded earpiece, but it isn’t ideal.

Occluded would = no vent.

Okay, but changing it to 0.9-1.2 still gave the same error. And as the image shows: The right side has no trouble using an estimated vent, while the left does.

Also, even when the dome is occluded, there could occur some venting. That’s why I rather use the estimated vent: So the leakage of sound of the custom molds is taken into consideration. Ideally, the estimated vent would still be zero.

It’s easy to work around. But I would like to know why sometimes Phonak can’t to use its estimate for fitting. It’s odd.

I would be okay with it, if it turns out that it means that the estimated vent and the given vent can’t be discriminated because of the results: The lines fit too closely.

Comparing it to the feedback threshold results from my Bolero B90’s, I see that the thresholds are quite a bit higher. Around 8kHz it was 23dB for the Bolero’s and is now 30-something for the Marvel Audéo’s. So the idea that I just made a few bad custom molds is not that convincing: 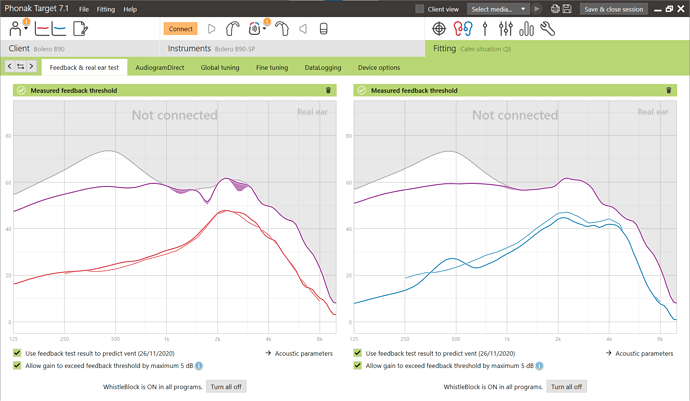 The feedback test in 26/11/2020 is checked at the bottom of the page.
I believe that is incorrect. You need to be using a recent feedback/real ear test.

That is the session for my Bolero’s. Haven’t made new custom molds since end of November, apparently. The image from the first post is from a session for the Audéo’s.

Yes, of course. I used the same workflow every time.

Have you ran feedback manager since putting the molds on the receivers?

Exactly I was thinking this, something about that first screen shot, near perfect fitting moulds with 0 leakage.
@Markismus try a little experiment, enter your audiogram exactly the same for both sides and rerun feedback manager with the same acoustics.
Just one other question,have you actually noticed any difference in the how the left sounds,say compared to using different acoustics, you should of course,as changes in the vent size will obviously change the low end gain, but I’m curious about it if target can’t estimate any vent size at all.

Might try using the help icon at the top of the page.
“No estimation possible”
Might be a quick answer or solution.

A quick look at Phonakpro brings up adults and then mentions vents can not be estimated for children.
Is the left aid possibly set up for a child?
I know these are terrible suggestions, just asking.

This same issue happened to me. Not sure why but going into another room (that I guess is more quiet) allowed the feedback test to be ran better and the estimated vent could be measured better.

Thanks for the replies. I just double-checked: With the same setup the power domes work like they should and the custom molds don’t. I guess that the only sensible thing is to make other molds and hope that it won’t repeat. 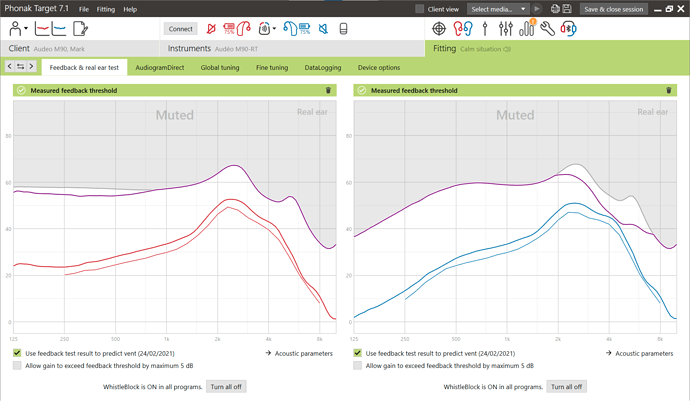 image1858×1080 184 KB
( I expect the high values for the right ear lower frequencies are a measurement error. Haven’t seen such high values before and I am not seeing them with medium power domes.)

Still, the low values for the low frequecies do seem to imply that both the custom molds and the left power dome leak too much low frequency sound. And that is something that I also saw repeated in the AudiogramDirect: Hearing treshold was lower for the lowest frequency.

After I changed the left ear power dome to medium, the lower frequecies raised their values. The line at the higher frequencies was raised, too. Now it doesn’t come close to the G50 anymore. 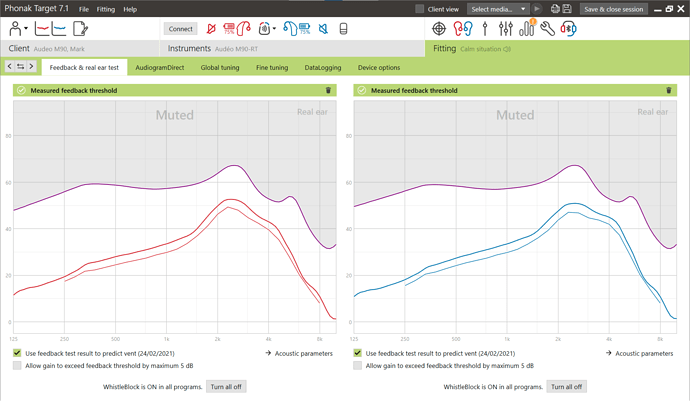 Too bad, I won’t last for half an hour with medium power domes, though. They are already quite uncomfortable. Itching will probably start quick.

Still, the low values for the low frequecies do seem to imply that both the custom molds and the left power dome leak too much low frequency sound.