You see all kinds of questions about brands of hearing aids (Is Widex better than Phonak, etc…), and the bells and whistles each of them have, and how much “improved” they are from their last model, but you see very little on the prescription formula used by each of the hearing aids. My thoughts are that the prescription formula is the single most important factor in how a hearing aid sounds, regardless of brand. And, associated with that, the fact that a Real Ear Measurement (REM) is done and the gains adjusted based on the REM. I thought I would try to illustrate how different formulas can be for exactly the same loss. Here is a generic ski slope loss that I used as example. 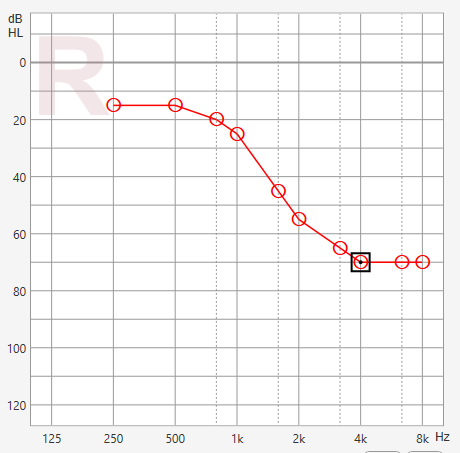 Following is the DSL v5 correction for this loss. I used closed sleeves for a fitting and a M receiver. What I think is noteworthy is that it actually attenuates the lows, and the soft sound gain (upper lighter curve) is almost on top of the middle heavier normal sound level curve. This means there is virtually no compression of soft sounds. There is still some compression of loud sounds, the lower lighter trace, as they are not given as much gain as the normal sounds. And last there is a high emphasis on recovering the highs, although whether or not one can do that, may be limited by feedback (the red shaded zone), and the fitting used. 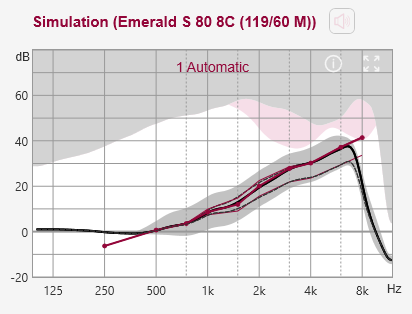 Next is the commonly used NAL-NL2. The noteworthy features are that it does not attempt to recover as much of the highs, is flat at low frequencies, and uses lots of compression for both soft sounds and loud sounds. Overall very different than DSL v5. 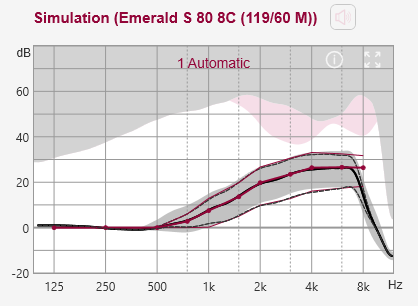 Rexton offers a proprietary fitting formula called SmartFit, which I expect is identical to the Signia Nx Fit formula. This is very similar to NAL-NL2, but rolls off the highs a bit and has perhaps even more compression in the midrange, with a little bit of gain in the low frequency. I would suggest it is insignificantly different than NAL-NL2. In fact I tried these two side by side and although I picked the SmartFit, I could hardly hear the difference. 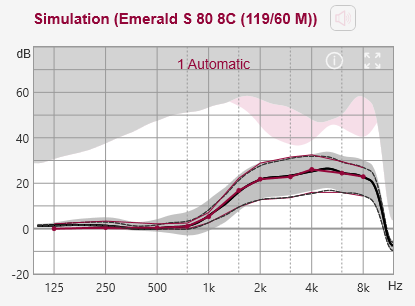 Last is the Adaptive Phonak Digital prescription for the same loss, an M receiver, but with a power dome fitting. This one is less similar to NAL-NL2, but has a fair amount of compression, and rolls off the highs more. 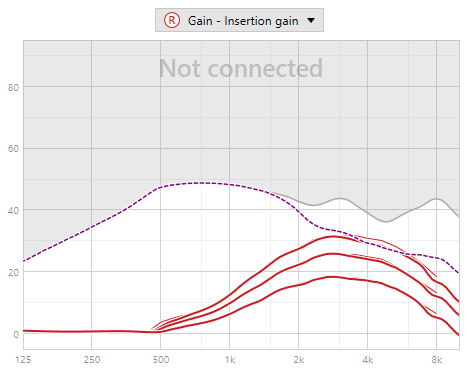 I guess my point is that the prescription formula can have a significant impact on the way a hearing aid sounds, but we are more likely to think of buying a new hearing aid when perhaps a new prescription formula is all that is needed. I did not do the NAL-NL1, and some of the other options. But most aids give you a number to choose from. Something to discuss with your fitter if you are not satisfied with the sound you are getting, or think it could be improved.

Here’s what I got with your test audiogram for the Adaptive Phonic Digital Contrast formula with Marvel M90, Power Dome, experienced user, my sex and age. (For the last three variables -NAL2, at least, may be affected by a small amount.) More highs roll-off! 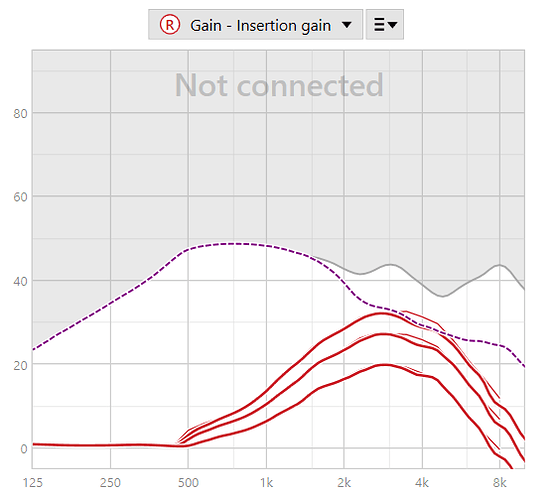 I started trying APDC in my V90s this morning; they’ve heretofore always been on APD. Too soon for a judgment.

My understanding of compression, which is limited, is that the Contrast formula uses slower attack and release times. They have been found in some studies to be more suitable for those with higher losses and lower cognitive abilities – probably older people with significant hearing loss. Generally younger people with less of a loss like fast attack and release times. At least that is what I gathered after reading a number of studies on compression. The attack times do not show up in the insertion gain curves. The Contrast one does roll off the highs more. Perhaps that is part of the theory that the highs are not necessary for speech recognition and perhaps a distraction for older people. Here is what I found that Phonak says:

" For whom should APD Contrast be considered?

For clients who do not cope well with compression, or for clients with poor auditory resolution abilities, such as those with speech discrimination poorer than expected for the audiogram configuration APD Contrast must be considered."

[Phonak:] those with higher losses and lower cognitive abilities

Hey Mrs. Phonak, higher and lower than what? My latest 'gram reached 95 dB HL on one side for the first time. And I’m pretty sure that my cognitive abilities are lower – than they were 60 years ago.

[Phonak:] speech discrimination poorer than expected for the audiogram

How much, if any, is my speech discrim. poorer than expected from my 'gram? Anybody got a table where I can look that up?

Anyway, I’m just trying APDC on. After I have some experience with it, I’ll move on to DSL and the NALs.

One thing to listen for with slow compression release is a bit of a pumping or hiss sound after speech or musical notes. If the compression of soft sounds is slow to release the gain will be turned up higher than it should be after the sound stops. It can elevate background noise that you don’t hear during speech, but do hear after the speed stops and the gain is still high. This is kind of like the pumping sound you may have heard on the very early Dolby noise reductions systems used with high noise cassette tapes.

How much, if any, is my speech discrim. poorer than expected from my 'gram? Anybody got a table where I can look that up?

It turns out that there is such a table, along with much other information about fitting for speech recognition, in the Phoneme Perception Test 3.0 Desktop Fitting Guide. The associated software looks to be useful as well. Both are accessible from the Phoneme Perception test Overview page. Thank you, Phonak!

Interesting. Thank you for the info. Is this available to the public? If so, is there a charge?

It’s available to the public free of charge though the links in my message to which you replied.