Well, I bought a fancy new TV with Bluetooth to hook up to my Resound aids.
I now understand that you can’t go direct Bluetooth. So I got the Resound Streamer.
It requires RCA input. My fancy new TV only has Optical Audio out / or you can connect a Bluetooth speaker.
I’m trying not to be bitter that the old TV had RCA audio outs. New picture IS better AND bigger.
So as I see it I now have 2 choices;

OR
2. An Optical Audio digital to analog converter like this to hook to optical audio on TV and then RCA to Resound Streamer.
Digital to Analog Audio Converter-192kHz Techole Aluminum Optical to RCA with Optical &Coaxial Cable. Digital SPDIF TOSLINK to Stereo L/R and 3.5mm Jack DAC Converter for PS4 Xbox HDTV DVD Headphone: Amazon.com: Electronics

Am I on the right track? I don’t want to buy a bunch of stuff that won’t work. I’d also like to avoid delayed sound as much as possible.
Help!
David

i think you have to buy it or borrow it from someone to try it out. It may not be as planned, and there may be more signal delays as a result.

You said the TV is new, is there a possibility to return it to the store or replace it with a model that has what you need?

What model are your Resound hearing aids?

It doesn’t really matter as long as they have the correct TV streaming unit for them?

Just press the button on the device within the first two minutes of a reboot of the aids and they should find the streamer.

The TV unit has an optical input In the back, not just RCA.

Yes, that’s what I didn’t understand.

Not sure if Um_bongo is referring to the ReSound TV Streamer 2 as “the TV unit” but the ReSound streamer accepts digital audio input from a TV. That’s the way my TV Streamer 2 gets its audio output from my TV. My Yamaha amplifier also wants digital optical for best sound reproduction so I got a POWERED digital optical splitter on Amazon and it works great. You have to be careful not to coil or kink digital optical cable too tightly or you can run into problem there, too. Lots of discussion in the following thread (there are other related threads as well):

Does It Make Much Difference What Type of Audio Output Is Used for TV Streaming? - Analog vs. Coaxial vs. TOSLINK S/PDIF? Assistive Listening Devices

Wondering whether there is any real perceptible difference between RCA output, digital coaxial, or Toslink S/PDIF output to a TV streamer? It would seem that the main reason for using the S/PDIF output is that being optical, it is not susceptible to electromagnetic interference from a busy environment such as we have in our house. I thought the analog RCA output to my ReSound TV Streamer 2 sounded pretty good but essentially for what we view the most (Netflix DVD’s), my TV is converting digita…

That’s not what the OP needs; both the professionals are struggling to understand why they aren’t hooking up the TV streamer 2 (Tv unit) with an optical cable you can get from Poundland.

I use this Optical Audio digital to analog converter:

So I got the Resound Streamer.
It requires RCA input. My fancy new TV only has Optical Audio out / or you can connect a Bluetooth speaker.

That’s not what the OP needs;

Maybe I read more carefully than anyone else? The OP incorrectly states that he needs an RCA cable to connect to the ReSound TV Streamer 2 and that his TV, amongst other choices, has a digital audio output. So, by my reading, he/she doesn’t realize that his TV could be directly connected to his TV Streamer 2 by a single direct TOSLINK cable. My reference to a powered TOSLINK splinter is simply how to deal with a need, such as I had, to also connect the digital audio output to something else. The OP also asks about BT connections but that’s something else (his option #1). I am providing an option that I know WORKS first hand for his option #2, which is incorrectly posited because he doesn’t need an optical to RCA converter. He just needs a simple inexpensive cable, unless he has another need or two for his TV optical audio output. And I venture the TOSLINK output is superior to others unless there is something about stereo or surround sound that I’m not bothering to look up right now.

Also, whether a powered TOSLINK amp device is needed or not may depend on where he/she wants to put his TV Streamer 2. I seem to recall reading older forum posts when I was deciding what to get that some folks found that for a significant run of even just a simple direct TOSLINK cable, having an amplifier in the circuit was helpful to improve signal quality (the recommended length one can go without amplification might be discussed in one of the links I gave in my original post in this thread - otherwise, it can be found in discussion in older threads on the forum).

If you watch the setup video on the Resound site it clearly shows a TOSLink cable being used.

Well…
I screwed up and bought the Resound 1 Streamer.
I have no problem starting over and getting a 2…IF - that would be better than just adding the digital to analog converter.
Any comments appreciated. 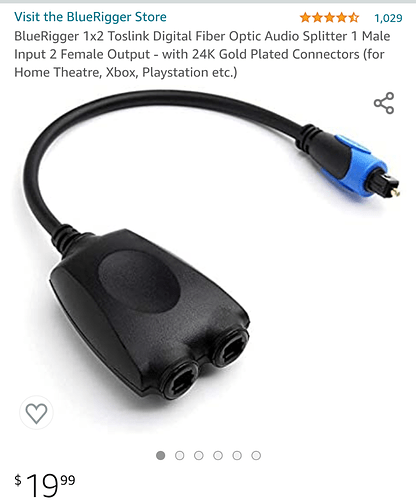