Does anyone have experience with replacing the rechargeable battery in a Resound Phone Clip?
After an all night charge it only lasts 4 or 5 hours. When new would go 12-15 hours.
The folks at my Costco, where I bought it, didn’t know anything about it and seemed disinterested. There is a small torx screw at the lower rear which I removed but the case doesn’t just pop open. I think it must be pried off much like on a laptop but I’m afraid of breaking it.

I am replying to this just to provide information about the battery. I am interested for a different reason. It makes a difference in a device on how much to keep it charged depending on whether a battery is Li-ion (or Li-polymer) vs. NiMH. Li-ion batteries survive storage better at 40% to 50% charged. NiMH are best kept fully charged. Unlike Li-ion, they degrade faster if they sit around at a low % charged. NiMH batteries are also somewhat less susceptible than Li-ion/Li-polymer to elevated temperatures, AFAIK.

Also, I wanted to know the capacity in mAh of the Phone Clip+ battery. The Phone Clip+ device has no battery % charge indicator but if one knows the capacity of the battery, using a USB digital multimeter when one charges it, one can record how many mAh one input in charging and get an approximate idea of how much it’s been charged up-useful if nothing else for partial quick charges.

The following is the main page of the FCC review materials: https://fccid.io/X26BTB-2

In my screen capture, the first red arrow points to the battery clip plug, the second red arrow to the apparent battery type ID: 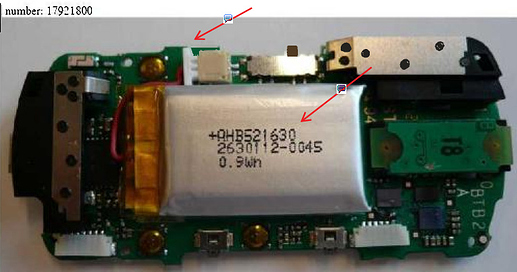 Unlike the Phone Clip+, where the FCC documents show the battery cleanly removed from the device and connected via an apparent plug, the similar-sized Li-ion battery in the Multi Mic (FCC ID X26SM-2P) appears to be soldered to the circuit board and not as easily replaceable: https://fccid.io/X26SM-2P/Internal-Photos/Internal-Photos-2881763. Amusingly, ReSound refers to the device in the documents submitted to the FCC as “spouse mic” - see label just above 1st photo on left in link given.

Interesting if you compare the FCC internal photos of each device with the battery removed (the 2nd photo in sequence for each device’s internal photos), you can see from the residue on the circuit board that the Phone Clip+ was apparently glued in place whereas the Multi Mic battery might be resting right next to board components and held in place only by a tight fit into the outer case???

A search on the apparent Multi Mic battery ID of AHB451730 turns up nothing on the Internet.

Edit_Update: Er, … I was using Bing Search. When I switch to Google Search, I found the following Taiwanese Company that details the specs on quite a few “AHB…” battery types. Advanced Hybrid Batteries(AHB)®

If one searches down the page, one can find detailed specs on the AHB451730 battery type: