The tinnitus controller needs to be set up precisely, just turning it on doesn’t match your tinnitus requirements, actually I find that Phonak has a very limited controller built in, ReSound, Signia, Widex have really good controllers with a lot of features, in fact I would say ReSound have the best I have seen.

Anyone use the Phonak Tinnitus Balance on their Phonak Nathos Auto

Yes I do, I have the same aids as you.
It was never really set up for me, it was just turned on. It’s part of my calm situation program. It’s quite noticeable, I find it a bit too loud.

Mine is set to my hearing loss according to the audiologist. I saw 83 dB on my left ear. I can’t even tell it’s on. Not sure what my right is set at.

As mentioned, they need to be set up precisely for your tinnitus, just having it turned on for your loss just isn’t going to work for most people.
What exactly are you expecting to hear? What you need to do is mask for tinnitus, so what kind of “noise” at what frequencies is your tinnitus? White noise,pink,blue or running water, or ringing, screeching?
Honestly your audiologist needs to be very experienced to get these set correctly but since you do your own programming you can adjust them to where you think they should be.

I agree with @tenkan. When I worked with Signia’s version, I would often cycle through the different types of sound (white, pink, brownian, etc.) until the patient said, “Wow!” I wasn’t really given much training on this (“training” being a 4-letter word in my previous company), so I had to play around with it. I’ve seen the masking have instant, dramatic results, and I’ve seen it have zero results. One thing I did learn is that the masking should be set so that it is barely audible. In the beginning, you’re “supposed” to hear both the tinnitus and the masking at the same time. Your brain is supposed to start ignoring the tinnitus. From what I understand, it’s more retraining your brain than instant result.

That being said, I have seen it have an instant effect.

I’m finding it more beneficial then having it set as pink noise since it’s been adjusted. Having it set to my hearing loss is a lot better.

I’ll have to uninstall my Target software and type in the unlock code so I can look at the settings of the Nathos Auto.

The NHS are very good at just setting the hearing aids and that’s it. As adults we don’t get any automatic follow up appointments.

Before I started to self program in 2011, the NHS weren’t even sure how to link a Phonak remote control.

Just come back from the hospital. The noise generator control had to be enabled in my programs. I can now hear it. It’s helping loads.

Since this thread I’ve started noticing my tinnitus again.

I think living with it without expecting it to improve, might have worked for me, too.

However, since my mother can’t sleep because of the noise, it might me nice to put some work into this feature. 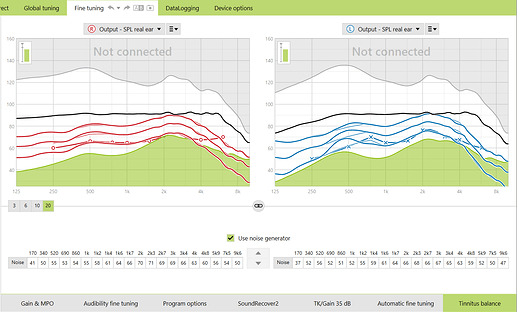 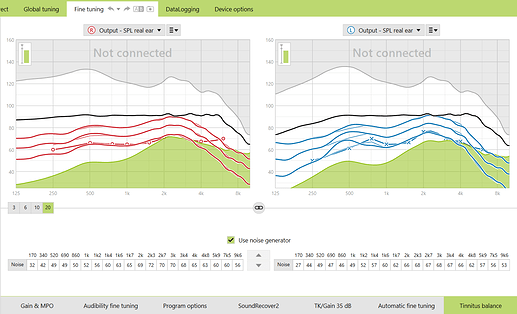 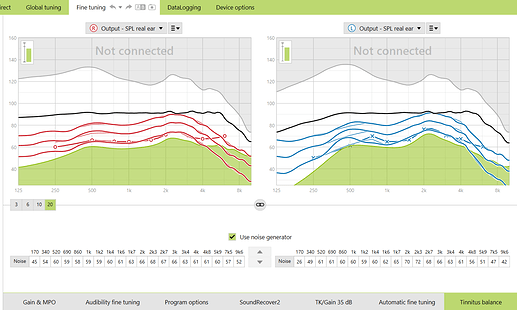 I find I can’t hear the noise if it’s set for my hearing loss. As my loss is conductive, I don’t think it takes into account that you need more power to push through the damaged middle ear.

Yes, I had to push the volume up a bit, too, when it’s set to my hearing loss. Rather tiring, though! Feel like taking a powernap! Some high frequency tinnitus still dominates, though, until it is set at the max.

Why did you change from hearing loss to pink noise?

I find pink noise more relaxing and by the end of the day, I don’t notice my tinnitus or pink noise sounding.

Some time ago I tried all three pink, white and audiogram. I also had to push gains up in all three to hear the tinnitus generator.

What I remember was a constant noise at a constant frequency. My tinnitus is a bunch of different frequencies so the tinnitus generator did not help much. I did try it for a few days at gains loud enough to hear. What I noticed was it hurt my speech recognition so I turned it off.

I should try it again some time. I read it should be a very subtle sound almost not heard that takes time to get results. I did not do that.

@Raudrive If you’re willing to sacrifice volume control, you can let it control the noise level. Works quite nicely. You could also skew the profile to more highs or lows if you find that there are still tinnitus frequencies that are not masked. If that doesn’t work, you can try to pinpoint the frequency of your most annoying sound and manually input it into your AudioDirect page. However, I don’t see the possibility to put more than one into it.

My first day results are:

Does any of this sound familiar? What are your experiences?

The Tinnitus Handicap Inventory can be entered, but is not used in the pre-calculation. Is there a secondary calculation in which it is used?

Looking at the THI_Questionnaire.pdf (60.2 KB) and especially the way the index is calculated at the bottom, I think they would be hard pressed to make adjustments based on this inventory.

I read through the tinnitus attachment.
At the end the results got a smile out of me. I didn’t need to do the questionnaire to get the results. The results spoke for themselves.

Been thinking about this, wasn’t sure how to reply.

The tinnitus generator affected you differently than me.
My thoughts on it was it didn’t help me, period. I did not notice tinnitus to be worse from using it. The generator did lessen word understanding. It was just more noise that confused my ability to understand words.

Experience so far
After a few days with white noise, I feel that the most that has happened is that I am more aware of tinnitus and that I have more tinnitus while the hearing aids are off (in bed).

Most Troublesome Tinnitus (MMT)
I’ve tried to match the tinnitus to a frequency using online tools. I found this page helpful.

I found it quite impossible to assess the frequency based on a comparison. Around 5880 the generated sound seemed to dip in loudness. That seemed a nice criterion to choose that frequency. Also the noise is at my hearing threshold, so I choose 55dB as the loudness.

For those that felt that they didn’t hear the sound generator with choosing ‘hearing loss’: It is a lot louder with MTT enabled in the audiogram page in Target. 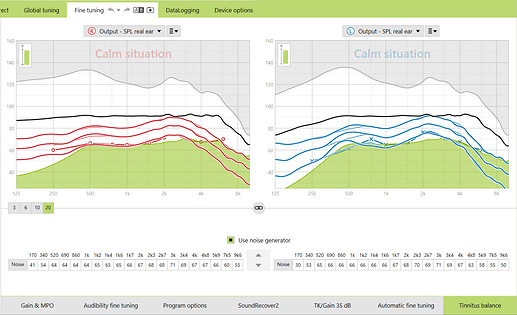 I had thought about trying it again but now realize probably won’t. After 45 years of it why bother.

At least it is true to its name. Otherwise they would have called it tinnitus masking or sound therapy.

The impact is not that heavy and it was said in advance that it would require tinkering. So I’ll look at it for another few days with the hearing loss profile and switch it to pink noise after that. I like a complete set of results, I guess.

As I am experiencing rather strong tinnitus at the moment it seems that my criterion was off: At 7700 Hz pure tone it sounds the same as my tinnitus. If I make it rather loud, the tinnitus keeps quiet for about ten seconds before it starts again. I can even repeat these results. Quite interesting!

I like a complete set of results, I guess.

The true side of a DIY type person.