Kate and I were brand new to HA’s a year ago. We chose the Phonak Audeo Marvel M90-R because of Dr. Cliff Olson’s enthusiastic YouTube video introducing them. Dr. Cliff is an Android phone user as we are. When Dr. Cliff said that the Marvels were the only HA that would connect directly with Android phones and Microsoft Windows 10 computers, actually any device that used Bluetooth Classic, that sealed the deal! Kate and I were both fitted with our Marvel M90-R’s on the same day, December 26, 2018.

At first the connectivity between different devices was cumbersome but doable. If you only want to be connected to your phone, there was no problem at all. Kate had no problem as that is all she wanted to do. I, however, wanted to connect to my various Windows 10 computers as well as my phone. For me the connectivity changes were cumbersome at best. Then we got the Marvel 2.0 firmware update and the problem was resolved. I could now change devices just as I was always used to doing with other Bluetooth Classic devices. Streaming audio quality with the Marvels is superb.

We approached this Friday’s audiology appointment with much trepidation as we would now have a new audiologist. Our old and trusted audiologist had decided to move back to Ohio. Since we had a new audiologist and we were at the one-year point, she wanted to do new audiograms and REM. There was no need to be apprehensive as our new audiologist is very experienced and is more than knowledgeable and capable. We like her a lot.

I’ve posted my new audiogram on Hearing Tracker as it has changed a bit. I think perhaps more so as I listened much more carefully and pressed the button just as soon as I heard a sound. This was interesting as there was only one point on my audiogram where I was down 70 db. Previously I was on the 70 db line for the last 3 readings. The new audiologist spent more than two hours with the two of us.

She said that she was a firm believer in REM and based on the results she made setting changes for both of us. She said that based on REM she was increasing the low end bass response quite a bit for both of us. She said this would result in a noticeably fuller sound. She was correct. The changes were instantly noticeable. Even though the total volume hadn’t changed, it was very interesting that it seemed that it had decreased. Any previous shrillness had evaporated. She explained that this was because of the additional low end added and she showed me the REM line on her computer of where I was previously and where she aligned the new changes with where they should be. After living with the changes for a few days I have to say that the changes have made a dramatic difference. As good as I felt the Marvels were before, they are that much better now! There is no question that she knows what she is doing.

One of the most interesting things that happened at the appointment was the audiologist’s recommending that we both get custom molds. When she explained that there would be a big difference in how I heard my piano, especially at the low end, there was no question that we would get them. I’ve read much on the forum in the past year about the advantages of custom molds. We had the impressions made and the molds ordered. On January 6th we have an appointment to go back and get them. She explained that with the new molds we would require new REM to be done. This should be exciting! I’ll be posting about the results!

Edit: Be sure to click on the link in blue in the first paragraph above to watch Dr. Cliff’s video!

Excellent review Gary. I too got the M-90RT’s because of Dr Cliff’s video. I’ve always been Android guy. These HA’s are perfect for me.

I got mine because of Dr. Cliff as well. I happened to see the video on the morning I was going in for new aids. I also am working with a new provider–a hearing instrument specialist. Historically I’ve only used audiologists, but I’ll give her a chance. I don’t know why Dr. Wahl isn’t there anymore; pity.

I also got mine because of the reviews and doing lots of research. I probably could have gotten by with M70s or 50s or KS9s or some others but I didn’t want to be sorry I didn’t get the 90s.

These are my 4th set of aids and by far the best. I also got all the extra goodies, select, pen, small charging case, Noah link, TV and BT connectors, and lots of extra wax things and assorted domes. Very happy with my purchase. I am hearing better than I have for a long long time. Love the streaming and iPhone connection.

What were you in before? Closed (“vented”) domes?

I’ll be interested to see how things go with the custom molds for you.

I wish you well with molds. They certainly look good on paper (or more realistically on the computer), but they did not work out for me. I think it is kind of a personal thing. I just did not like the way they fit in my ear canal (even after three sets of molds), and they moved around causing noise in the ear canal (even when the aids were turned off). I attribute that to simply the fit and my relatively good low frequency hearing.

On the computer with your current audiogram, you are somewhat marginal for feedback with a Rexton, while using NAL-NL2 and double domes. This is what I see. 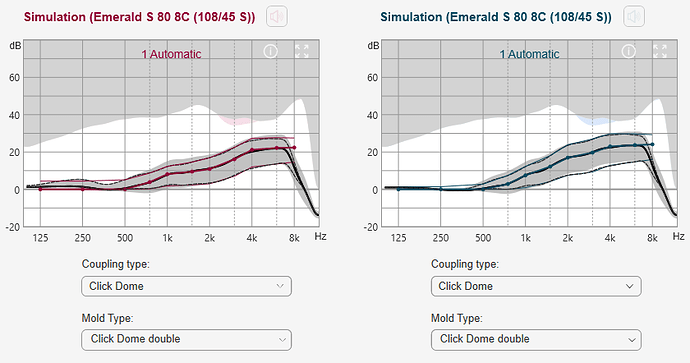 With custom molds the software recommends 2.5 mm vents, which are not that small. The feedback risk does go away. 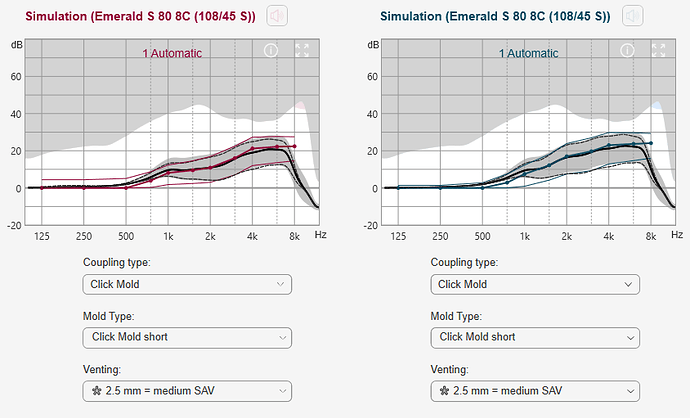 Despite my failure with molds, I see many reports here of people loving them. I hope that is the case for you.

Excellent review, thanks for sharing.
I was reluctant to use ear molds for a long time. Almost a year ago I finally got the molds. It was a very good decision that has worked out well. Music is probably the one biggest change to the better. I suspect you will be amazed with your piano once you have the ear molds. Another benefit is the ear molds do not move around like domes do, at least for me.

Thanks again for your review.

For me, double power domes seal better and I hear better. At first I found molds more comfortable and easier to put in and out but no improvement in sound. Now I find the domes more comfortable. Obviously, we are all different.

Here are my current domes… 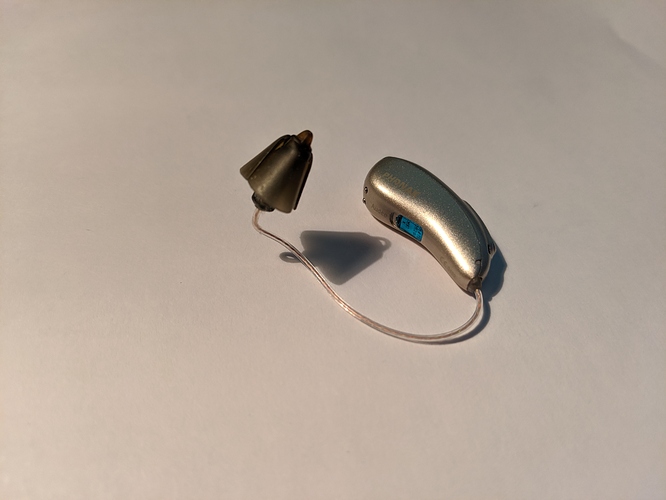 Thanks! I still work on my piano several hours every day and I’m very much looking forward to hearing what molds do.

I am not immediately sure of what a change to a mold would do for your hearing aid gain response if you were getting the full REM gain with your current fittings. However, if the gain had been compromised (as mine is) to avoid feedback, then the molds should allow restoration of the full prescription gain.

TraderGary,
You will be very happy with your new molds. I’ve had mine for the past 5 months and the difference is quite striking! Yes, let us know how you do with them.

Hi TraderGary,
did you and Kate have your Phonak hearing aids completely fitted on December 26, 2018 the day in which you received the aids or you had more adjustments later?
Abe

Hi Abe,
We first came in for hearing tests and ordered our Marvels about two weeks before Dec 26th. December 26th was the day we came in to actually have them fitted and that was the first day we actually went home with our new Marvels.

It should be pointed out that our audiologist was new to the Marvels and this was her first Marvel fitting.

It was finally determined that in order for my piano to sound right and not have a cringing warbling effect that WhistleStop had to be turned OFF for the Music Program. Once that was done I was happy playing my piano using the Music Program.

We both had our audiograms and REM done again recently at the one year point. We are both quite pleased with how our Marvel M90-R’s are working. Now we’re looking forward to even better results with new molds. I’ll be reporting that after Jan 6th.

Thanks for sharing your review. I was fitted with the same aids a few months after you and your sharing your experience has been very helpful. I have found the TV connector and the ability to stream bluetooth a huge benefit. Being able to understand what is being said on the TV or when listening to the radio…I simply did not appreciate how much dialog I simply was not hearing. My wife loves that she can now lower the volume on the TV to reasonable levels when we watch together although now she has learned that she needs to “pause” the TV if she wants to speak to me while something is on. My current pair is out for repairs as one of the LED’s had failed. My audiologist (Dr. Olson) set me up with a pair of loaners programmed to my loss before they were sent in since I’m a remote patient. My understanding is that there is a second firmware upgrade that needs to be done before they will be returned to me. My only complaint would be that the firmware upgrade (to my knowledge) can’t be done remotely and the somewhat high cost of the TV connector. It works so well I’d like to out them on multiple devices.

I have had my M90-R since April with Domes at first, then got custom molds in October. This is my 3 set of HA’s, being now 9 year total with all domes, at 48 years old now, and boy the molded are night and day. If you are able, try molds.

the somewhat high cost of the TV connector.

The TV Connector is $99.99 at my local Costco’s hearing aids department.

After Kate and I both get our custom molds on the 6th, I’ll be doing an in-depth analysis and description. From what everyone says, we’re really looking forward to the experience!