I’m approaching the end of my trial with More RIC aids and would love to get some input. Still struggling with speech (what else is new?), though we’re still tweaking settings (again, what else is new?!).

After the original testing (attached), the audi noted that I might want to at least start thinking about CI’s—as my WRS had dropped precipitously: 28% right; 32% left (which now that I think about it, is a little confusing because my left ear has long been worse than the right).

Anyway… as I mentioned, speech is still an issue with the More’s. Unfortunately, I’m unable to get a full picture of how much they’re helping me, because with the pandemic, I’m working from home exclusively now. And I also have very little opportunity to test speech in noise.

Any thoughts about my WRS, in terms of either the More fitting or the possibility of CI’s? The audi’s CI suggestion stunned me… I wasn’t “ready” to hear that my word recognition had deteriorated so badly.

I assume that your audi has enabled Speech Rescue for you? Not sure if it’d help much with the left ear, but it should help “somewhat” with the right ear if the lowest 2.4 configuration is selected. Even if it’s not as helpful with the left ear, you might as well enable it for both and configure both the same way to at least get some symmetrical correction.

Are you being fitted with the 105 dB receiver for both ears?

To test speech in noise at home, you can play 2 sources of YouTube video, maybe one that simulates a noisy restaurant (preferably with a stereo set of speakers that are spread apart behind you) and one where somebody is speaking in front. I’m copying @ziploc here because he has the More and he’s trialing the Whisper and he’s doing some speech in noise in this fashion. So maybe he can help give you some tip for the set up.

You can trial the Whisper if interested. Some folks on this forum has tried it with some degree of success, specifically for speech in noise. Check out the various Whisper threads on this forum if you’re interested. But if you can’t find noisy places to try it out, then it’d be hard to know what works well for you in the first place. Also, with your kind of loss, it’s not even speech in noise you’d have to worry about. It’s more like if you can understand speech well enough or not, even in simpler environments. So any HA brand/model that can be helpful to you is good.

Short of considering the CI route, perhaps you can also wait for the BTE PP version of the More to come out, or other existing power versions from Oticon or other brands.

What are you wearing right now?

Thanks for responding. Yes, my audi enabled Speech Rescue a few weeks back… pretty sure it’s both ears, but I will confirm when I see her again this week.

Interestingly, I have 85 dB receivers. We discussed this at length when I last saw her. Her reasoning made sense to me, but I’m terrible at “regurgitating” these technical things. The big picture that I came away with is that because my lows/mids are pretty good, she feels the 100 or 105 would introduce other issues/problems. She then conferred with her Oticon rep, who agreed.

I’m currently wearing Signia Pure NX RIC’s. And custom molds on both these and the More’s.

I’ll definitely pursue the YouTube videos, and also look into the Whisper threads. Your info is super helpful… thank you!

Two and a half years ago, my audiologist said that CIs were probably in my future and I should have a CI evaluation just to see where I was at. Neither of us expected anything to come if it at that point. Today I have bilateral CIs and believe it was definitely worth it

Part of the test is speech recognition with your hearing aids both in quite and in noise, using sentences rather then just random words. So you get a good idea of how much the aids are really helping you.

So it might at least be worth getting the evaluation, you aren’t committing to anything at that point, just finding out where you stand.

Yes, I’m thinking more and more so that it would be worthwhile to get evaluated for CI, pathurley.

Thanks much for responding!

Thanks for responding. Yes, my audi enabled Speech Rescue a few weeks back… pretty sure it’s both ears, but I will confirm when I see her again this week.

Interestingly, I have 85 dB receivers. We discussed this at length when I last saw her. Her reasoning made sense to me, but I’m terrible at “regurgitating” these technical things. The big picture that I came away with is that because my lows/mids are pretty good, she feels the 100 or 105 would introduce other issues/problems. She then conferred with her Oticon rep, who agreed.

When you check with your audi, confirm that she has it set at the lowest 2.4 configuration. This puts your destination for the lowered sounds between 1.6 - 2.4 kHz. Your right hearing is moderate to moderate-severe in this range, and your left ear is closer to severe to profound in this range. So the 85 dB receivers may be (barely) acceptable for your right ear, but it’s not really adequate for your left ear.

And I wouldn’t characterize that your lows and mids are pretty good like your audi did. Below are a couple of screenshots showing what the low and mid ranges are, and what levels are considered good/mild/moderate/severe/profound. This would put your lows (up to 500 Hz) as good, but your mids (500-2kHz) as mild to moderate on your right ear, and moderate to severe to profound on your left ear. Your highs are profound on both ears.

You can leave the High Frequency bands setting to ON, but it’s probably not going to be helpful ON anyway with your kind of loss and using the 85 dB receivers only. You might as well set it to OFF to avoid driving those 85 dB receivers too hard, potentially oversaturating them into distortion, not to mention causing feedbacks that you cannot even know because of the profound loss in that region already. 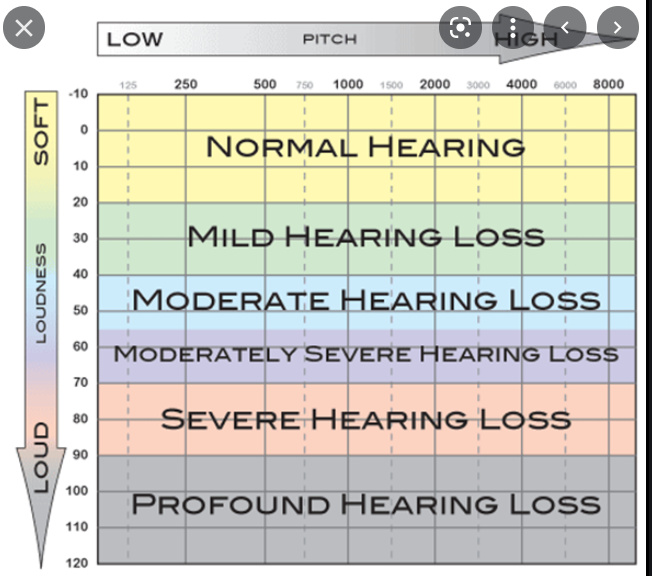 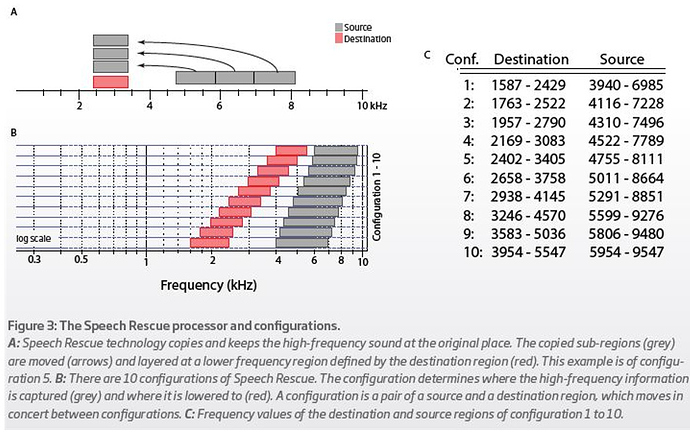 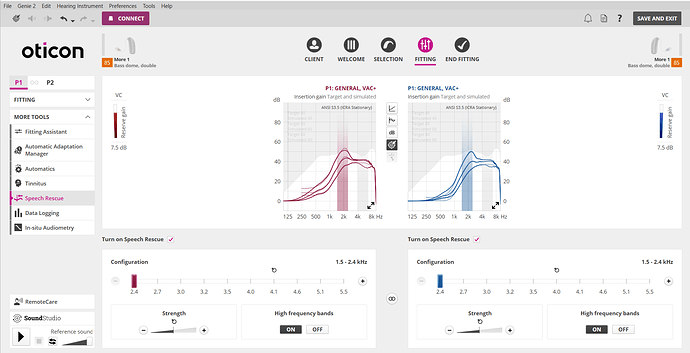 Wow, Volusiano, this is beyond helpful! I will be taking it with me to discuss at my Thursday Audi appointment.

And I’ll definitely let you know where we end up.

Just want to let you know about my latest audi visit. I’m feeling pretty darned excited about it, and very relieved.

I had a list of questions/issues that would best be described as a “tome” (including your posts) and we addressed all of them. Love my new audi, who I see as a great balance between the old (wisdom/experience re: all things hearing loss) and the new, ever-changing technology.

Anyway, at my suggestion, we ended up doing some testing. I’d been feeling frustrated over the fact that I’m working at home and not going to restaurants or shopping, per COVID. So I’ve had very little opportunity to test the More’s, other than watching TV, tuning into household noises (including husband and parrot;), and doing some online tests.

Lo and behold, my miserable word recognition scores of 28%–32% were at least 70% for SIN and much higher for “regular” speech. The audi was herself blown away. I was thrilled. She said that there’s no reason for me to consider CI’s at this point, which is great news.

More good news: I stayed true to myself—in knowing that I need to be certain I’ve chosen the best aids for my particular loss—by asking to try one more, Signia AX. She is very willing to work with me. And after years of feeling like I’d “settled” for aids that were less than I needed (both in terms of fit and fitting), I know I’ll finally be able to relax with it… be it More or Signia.

I won’t be surprised if I end up keeping the More’s. While I can’t say that I’m a true fan of Signia (I’ve been wearing the Signia Pure Nx for the last three–four years), I am intrigued by the AX. And my audi confirmed that Signia seems to have upped its game since Sivantos merged with Widex.

Anyway, just wanted to update you, which I’ll continue to do. And thanks once more for your input… it’s helped greatly. :))

Glad to hear that you had a productive session with your audi. I don’t see anything wrong with trying out the Signia AX as long as you and your audi are game for it. If you find you like the Signia better, it’s all good. If you decide you like the More better, then it should make you feel better, too, that there’s another data point to validate your decision, whatever that is.

So basically your audi was able to facilitate and help set up some kind of SIN simulation in her office for you so you can test for yourself how it works out in the sim? I assume you’ll do the same test using the same setup for the Signia AX as well. It’s not the real thing but at least it’s something. I’d still encourage you to try to create some opportunity to test it out in the real world, if not possible in a noisy restaurant, then at least at a noisy shopping mall or something and with your husband along so you can test out hearing him talk in noise. Hopefully with the holiday season, the shopping option is a more feasible one for you. The problem with the simulation in your audi’s office is that it’s a small enclosed space so you don’t have to deal with more real world things like bad reverbs and more surrounding noise in a much wider open space than in an office.

Yes, exactly, Volusiano… the audi played SIN recordings with me in the booth in her office. And we’ll do the same for the Signia.

I’m hoping to get out into the “real world,” too, to do more testing. I’ll let you know where we land!