Was at my Mom’s audiology appointment in Northern California Kaiser today. She said they were coming out with a BTE this Fall. I don’t know if Phonak is really coming out with a new aid or if it will just be new to NCAL Kaiser and she’s talkig about Naida or Bolero? Any providers heard anything?

There is a virtual launch in August. Looks to me to be a possible new Audeo?

“Join us virtually for the unveiling of our revelutionary [sic], next generation hearing aid technology”

Do you maybe know the date?

But in some sense, if they give new features not previously available, it is.

I wonder what they could come up with and when would the release day be, better, when would they be available in Germany. Seeing that I have 2 months to pay for marvels, if new will be available in that period, I’d probably go with new ones. And there I thought that since they released last from marvel tech this year, they wouldn’t release new platform for probably a year more.

How long it takes them usually from virtual launch to be available to buy, if someone has an idea?

Virtual launch 20th August. I know nothing more than that at the moment although I’'m sure we’ll here more in the coming weeks. Releases are normally from the following month. So maybe beginning of September? Audeo Marvel was released late 2018 so it fits with recent release pattern for Phonak’s RIC’s if it is indeed a new Audeo product.

I see, thanks for sharing and please keep us posted

So it looks like it’s best to put my current trial on hold and wait to see what’s going to happen.

Interesting! I would guess it will be the first hearing aid with Bluetooth 5.2 and the new LE audio protocol.

Hopefully they could also introduce Active Noise Cancelling, since that is very popular on the latest earbuds.

I still think Phonak has really missed the boat by not offering an Apple MFI integrated hearing aids. I was a long time Phonak customer (at least 6 sets of hearing aids over the years) who switched to GN Resound because Phonak did not offer native integration with iPhone. Huge miss on their part.

lol And I stand up and applaud them for not drinking the Apple koolaid.

Phonak WILL be my next aids.

I’m totally ok if you don’t like Apple products. That is your personal opinion and decision. Thing is…at least half of Phonak’s addressable market uses Apple products and they have missed the boat.

I’d love it if this were true, but seems optimistic to me. I don’t think the LE audio standard has been published yet. But, who knows. It would please me a great deal if it were true. I do suspect Phonak has some significant improvement over Marvels in the works since they allow Costco to have all the advantages of the Firmware 2.0 upgrade in their KS9s. Waiting for the latest and greatest can be a fool’s game as there is always something around the corner. Depends a lot on one’s situation–if one needs new aids NOW, then waiting is generally not wise. However if one is doing fine and a new purchase is elective, waiting can have it’s advantages.

When the Marvel Audeo aids came out they made a huge step in connectivity that includes both iOS and Android. There were a few issues that later were mostly fixed with the 2.0 firmware update.

My point in this is this new next generation Audeo can be updated later with firmware updates as the Marvel aids were. The newer Bluetooths talked about so much could be a part of this.

Curious to see what they come up with.

But all other companies were already covering the apple customers, so I think phonak didn’t miss anything, quite the opposite, they went into the market without the competition. And as you can see on the forum, they’re clearly reaping the rewards of that decision without much effort.

Smart move if you ask me. Plus, they do work on iphone, but from what I see some models have issues in some situations.

I can’t recall if anyone said they have problem when they sit on couch in quiet room and have video call, on any platform.

And let’s not forget, majority of HA wearers aren’t running between meetings in different parts of the town being on voice call all the time.

Firmware upgrade making it fully compatible with the LE audio standard when it becomes available seems feasible, but who knows?

What features is Phonak missing by not being MFi? Isn’t it only like, battery status? Their native true Bluetooth implementation is universal so it works with any reasonably modern phone. The same can’t be said for basically any MFi device.

But all other companies were already covering the apple customers, so I think phonak didn’t miss anything, quite the opposite, they went into the market without the competition. And as you can see on the forum, they’re clearly reaping the rewards of that decision without much effort.

Absolutely totally agree with this,it was a game changer by phonak, it’s a bit annoying not being able to use other brands, without having to first buy some other bluetooth accessory, although they worked well, it was a extra expense that apple users didn’t have.

Sorry, but if you base your hearing aid purchase on what phone you use - that’s your perogative - but to argue that it is the ultimate basis for hearing aid selection is looking at it in totally the wrong way. Of course you could argue that all things equal between Oticon, GNResound and Phonak in all other respects, means the phone compatibility with Apple would sway it for you. But otherwise, I need to know I am wearing the best performing instrument - and I see little anecdotal evidence it is GNResound.

Something new is coming apparently from Phonak: 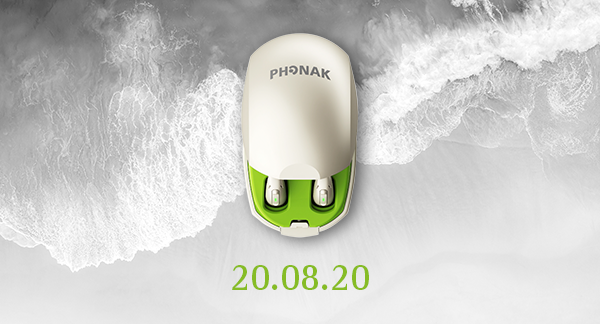 Something wonderful is coming... We're delighted to invite our independent customers to join us virtually for the launch of our next generation hearing aid technology, live with your Phonak team. Register you place today at: https://t.co/c0dJJc9EXg #AudPeeps #Phonak
3 Likes
tenoch July 23, 2020, 7:24am #18

Hopefully they could also introduce Active Noise Cancelling, since that is very popular on the latest earbuds.

Active Noise Cancelling there is no point in hearing aids. Simply because the noise reduction technology in hearing aids is infinitely more sophisticated than in earbuds.

Keep in mind that reducing noise in headphones is relatively simple because the signals are divided, the desired sound -multimedia audio- goes a different way than the unwanted sound -ambient noise- so separating it is very easy because they reach the headphones by different routes. In hearing aids it is another story, both the desired and the unwanted sound are mixed, both in the same environment and reach the hearing aids through the same path as the microphones.

On the other hand, marking the limits between desired and unwanted sound when you use earbuds is more obvious since if you are using headphones in theory you are interested in the sound that the application you are using is sending to your ears. Deciding what sounds are or are not desired by everything around you when you use hearing aids is not obvious beyond communication with other people.

Thanks! This has gone from rumor to pretty solid information that something new is coming. Who knows what the changes will be. From past experience, it won’t be as magical as they insinuate. I’m hoping for BT 5.2/ LE Audio compatibility, but my skeptical side thinks that’s a bit optimistic. We should have more info in a month!

I’m an Apple user from the date of the first Mac, but hearing-aid user just for the past 3-4 years. I was stimulated to look into hearing aids by one of my patients, a kidney transplant recipient with Alport Syndrome, whom I discovered suddenly could hear me even though he couldn’t see me because I was cursed with the burgeoning use of the Electronic Health Record, which makes doctors hide behind their monitors instead of talking directly face to face with their patients. I immediately made an audiology appointment, tried the current Resounds, and hated them. The Phonaks available then sounded MUCH more natural to me. I bought the Phonak device that would carry sound from the TV or my iPhone to my ears but didn’t miss it much when my house burned down in the 2017 Santa Rosa firestorm. I’m still using those Phonaks.

I’m guessing that “MFi” means “Made for iPhone (or iOS”) but don’t know that for certain. I’d be grateful for a plain-English comparison of how other currently available brands of hearing aids integrate with Apple products in comparison to each other and to Phonak products. I apologize for not knowing the difference between different generations of Bluetooth, and I’m very appreciative of the discussion in this thread about the different goals of extraneous noise rejection between hearing aids and products like Apple’s AirPods Pro (which I own). My guess is that at least some audiophile wearable device manufacturers will make inroads against hearing aid manufacturers over the next several years, but the market for devices for the hearing impaired is SO much smaller than the market for people who just want to watch TV, or listen to music while exercising is SO much larger that the single reason for trying to blend the two devices (having only ONE renting space on my earlobes) won’t propel Bose, or Apple, or any other entertainment device directly into the impaired-hearing market with the intent of capturing it.

And that “renting space” problem is real. I have sleep apnea. I also have mild visual impairment. This is also COVID-time, so, relaxing in the hospital after elective surgery and watching TV while drifting in and out of slumber yesterday, I had behind my ears: