Is there a way to measure the decibels of the hearing aids while I’m listening to music or any audio via Bluetooth on my phone? I’ve been curious of that because I want to know when the music is too loud for me in my HA because I spend hours listening to music while at work and I get tired of it and have to stop. So I would like to know how much time is enough.

The sound in your hearing aids is never going to be “too loud” for you if they’re setup properly by your audiologist. They’ll never get louder than their MPO (assuming they’ve been real-ear-measured).

Just pick up a dB meter app. It will give you peak and average readings.

There are some phone apps that can give you a crude approximation of decibels. They may only approximate the true sound level as any given smartphone microphone may not have truly accurate sound input level pickup across the frequency range (and just as for REM measurements for HA’s, your individual smartphone may be off the standard for its make and model). But for “ordinary, everyday” noise, they may tell you approximately what ballpark you’re in. My wife had an aerobics class at the gym (back in the day!) where she felt the instructor had the music cranked up so loud that it would be damaging to her hearing besides being annoyingly painful - so she got such an app for her iPhone, took readings, and went to the gym manager to complain that the instructor would not follow her request to turn the sound level down a notch or two.

@phobos512 interesting. I have thought about that but I wasn’t sure. However, browsing through the HA manual I read that they can go as high as 132 dB as a warning to not abuse my remaining hearing. That’s why I’ve asked.

@Um_bongo @jim_lewis I do have a dB meter app, but it just measures the noise in my environment, not the music on my phone streaming through my HA. Is there a specific app that does such a thing?

Yes @entgkar that is true but they can’t do that unless they’re set that way. All hearing aids have a large range of hearing losses over which they’ll perform.

You shouldn’t trust dB meter apps; very few are certified as accurate and only with specific external microphones.

The only way to measure a hearing aid output is with a real ear measurement at your audiologist (or possibly with hardware you bought from eBay).

I do have a dB meter app, but it just measures the noise in my environment, not the music on my phone streaming through my HA.

I think the idea would be (with the disclaimers that we’ve given about accuracy and reliability on phone sound meter apps) to put the opening of your HA receiver right next to the microphone of your phone and stream whatever sound you’re worried about at the volume you’d be listening to right into the phone microphone. You wouldn’t be wearing the hearing aid to test its output against a phone app. Normally hearing aids are tested in a very specific setup according to agreed upon standards so whatever you do would definitely be ad hoc and nonstandard. As Matt (phobos512) suggested, if you think you have a real problem it would be much better to have your provider officially check out your HA.

Another thing for anyone to look out for is we habituate to loud sounds as we listen to them. When I wore open domes, I’d be bothered by environmental noise as I walked listening to a podcast. After a while, it wouldn’t seem so loud and I’d crank it up another notch or two until I’d get an Android notification warning about the media output volume. With more occlusive molds and switched to streaming only (external HA mics off as I take a night walk), I’m not as tempted to turn the volume up to begin with and if anything, I often turn it down more as I walk as being too loud. OTH, the other night I didn’t hear a runner overtaking me from behind and could have wandered into her path as she blazed by between me and the curb - I need to post a big sign on my back “DEAF PERSON.” Wife thinks that I’ll someday be run over by a car I didn’t hear coming from behind.

@phobos512 Well, damn. That hardware is quite something. Confirming that my HA won’t get too loud for my hearing is enough for me and also a relief.

I’m used to listen to music at work and shut down the noise of my environment in order to focus, but my ears sometimes get fatigued by the non-stop listening and I have to rest. That had me worried as I don’t want to abuse so I wasn’t sure if it was the case.

@jim_lewis Doing that would really be inaccurate, but that’s okay. I also can relate to your situation because sometimes my coworkers are talking to me but I’m not listening due to what I said above. So after I stop the music I have to wait a few seconds for the HA adjust back to the environment AND THEN listen to them. They get desperate and have to repeat like 3 times what they want to say. That sometimes frustrates me so I have to be alert when someone wants to approach me or tell me something.

Wife thinks that I’ll someday be run over by a car I didn’t hear coming from behind.

I was nearly clobbered by a cyclist on my walk this morning, who apparently assumed I could hear them.

The only way to measure a hearing aid output is with a real ear measurement at your audiologist (or possibly with hardware you bought from eBay ).

I agree that this probably the only way. There are MANY of these on eBay and I’ve seen them commonly for a few hundred dollars. About 1/20th the price in that included listing.

@grantb5 Not that I’m in the market but I’d be curious to see what search terms you’ve used to get items so much cheaper than the one I found. One twentieth the price would imply you found a system for under $200. At the time I was searching from mobile and that was the first complete system I saw. Looking through the listings right now, the cheapest complete and working REM system is $1,000 and it seems to be DOS based so it’s quite old. It’s in this listing: 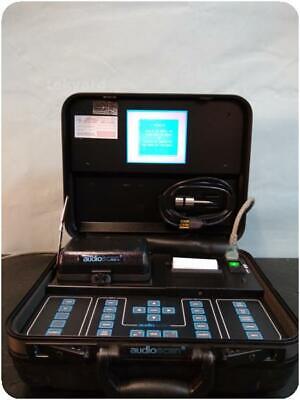 ((InvIDs))236348(((InvIDs))). Look at the pictures these are of the actual. Functionality Good (Powers on / Unable to test further). Item Location: tekyard NC Warehouse. • For the power cord, if you can see a separate picture of power cord then...

There are cheaper ones but they don’t come with the probe microphones, cabling, or a computer that would enable them to actually be used (and the serial/parallel cables included with one would seem to indicate you’d need to procure a rather old computer to use them, assuming you could find the software).

Yeah, the devil may be in the accessories. Here’s a list of recently sold ones. Normally I just search for

to see some recent deals.

I actually have one in a huge box I haven’t even opened yet.

The iPhone health app has a section that tells you the headphone audio levels (dB). Is that something you could use?