I have recently upgraded at Costco from my 6 year old Brio-1 to a KS-9 and have a question about echo suppression. The specs for the Brio-4 (which I was considering) I understand is built on the Phonak M-90 format, lists Echo as a feature. The specs for the KS-9 do not list this feature and I seem to be getting echo with it. So, is it true that the KS-9 does not reduce echo? Also I see the Brio-4 is a BTE format with the receiver in the HA it self where the KS-9 is RIC. I have read various Hearing Tracker forum comments about the benefits/problems of one format over the other but am not clear if the Brio-4 is a better choice than the KS-9; except the lower price of course. BT phone calls and BT streaming sound quality have been a problem and the Costco tech has not been able to clear this problem up so far. I have only had the KS-9 for a month so more time is available for a return/upgrade. Thanks for any advice.

The KS9 aids have an Echo program. It is one of the automatic programs. 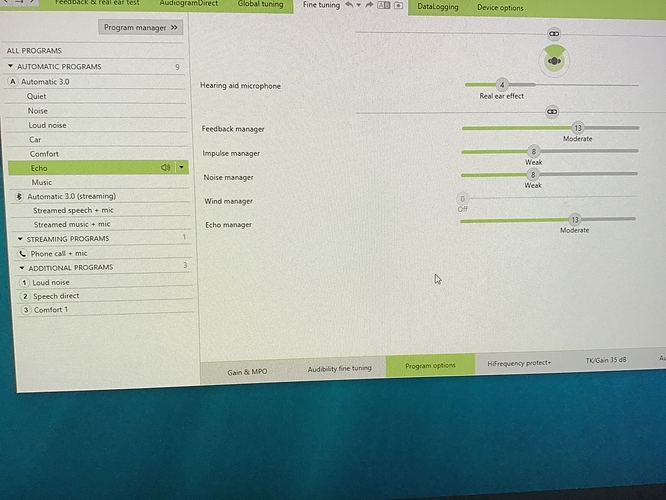 Raudrive thanks for your reply. Is this Echo program one that the Costco tech can add to myPhonak screen list so that I can control the echo level in different “hallow” rooms or does she have to do this?

I believe the Echo settings can only be changed by your fitter.
Your fitter could make it a manual program that you could get into using your phone app then.

Your fitter could make it a manual program that you could get into using your phone app then.

However even as a separate program it could not be adjustable with the app. Also, especially echo feature since it is not offered in the app.

Nor for example you can create custom programs from scratch and get the echo slider. Only in that autosense and if you pull it out as a separate program.

I haven’t tried that so can’t confirm behaviour for extracted echo exactly.

For example with 360 you don’t have any option in the app except volume. While with acoustic phone you have equiliser, volume and dynamic, but nothing else.

Public tcoil + mic, tv connector they give you only environment slider.

However, it might be that it is going to be enough just to tweak settings for autosense echo itself, I think I’ve changed directionality* to more focused and got better results in doctors office corridors and hospital corridors.

However even as a separate program it could not be adjustable with the app. Also, especially echo feature since it is not offered in the app.

Actually it could be done another way, you could make up more then one echo program (2 or 3) in Phonak target, so make additional comfort in echo programs and then separately make the adjustment for each echo program using the echo adjustment sliding bar, you could then scroll through those new programs for different degrees of separation/echo in the App.

Actually you can if your talking about using target, it’s very easy to do. Or as you say, within the App it can’t be done like that.

Actually you can if your talking about using target, it’s very easy to do. Or as you say, within the App it can’t be done like that.

You can’t do ‘custom program from scratch that includes echo’, and there I mean not one based on echo program but choosing "custom’.

I forgot if you even can make some based on echo. I think not. You can do custom or based on quiet, noise, bla but I think not echo one.

I think only way is to move original directly to custom by assigning position to it.

I wanted to have autosense echo and my echo to do comparison and I think it wasn’t possible. Echo is a special snowflake.